The move is finally over! Everything is unpacked and my life is back in order! Yea! Thanks for all your kind words and encouragement. Vegan food bloggers are the best support group ever!

Also, I need to give a VERY special thanks to VKO from Lifestyles of the Chic and the Vegan. When she learned about my impending move, she sent me a bottle of Rescue Remedy for my pets (I have 6 cats and a dog). Cats do not like moving, and a couple of mine are pretty skittish anyway. This Rescue Remedy stuff was amazing. You squirt a few drops on a cat treat and they're instantly rolling around in the floor like nothing has changed. Thanks so much VKO!

My new house has a HUGE kitchen. I'm used to tiny apartment kitchens, but now that I'm renting a house, I get to cook in a grown-up sized kitchen. It has tons of cabinet space, a lazy susan for my spices, counter space galore, and an oven that beeps at you when it's preheated. Here's a pic of half of it: 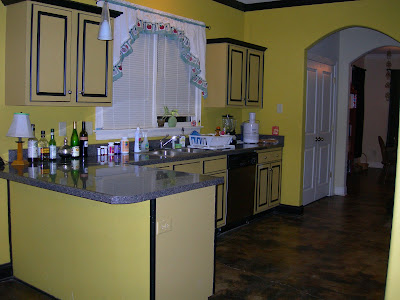 I just got unpacked last night, so I haven't had a chance to really cook anything big yet. But Friday night (before the move), I picked up this delicious Mushroom Lovers Pizza from DejaVu: 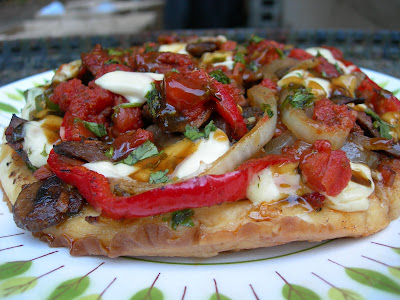 DejaVu is a new vegan restaurant in downtown Memphis. They have daily specials, and Friday night is Pizza Night. This was a personal pan size pizza loaded high with mushrooms, caramelized onion, sun-dried tomatoes, and vegan mozzerella. So good! Tuesday is Vegan Crab Cake Day, so I ate those on Tuesday but didn't get a picture. You'll just have to believe me when I say they were delicious. 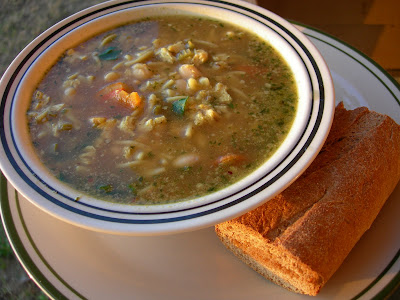 A while back, my dad ordred me some vegan goodies from Vegan Essentials. He picked out this soup mix, which comes in powdered form with dehydrated veggies. The back of the bag has add-in suggestions and I chose to make the Mediterranean Chicken Noodle version by tossing in white beans, parsley, and pesto in the last five minutes of cooking. It makes a huge pot (about 8 servings), so I'll be eating this for a few days.

But that doesn't mean I won't be cooking in my new kitchen! I plan on doing some baking tonight ... gotta christen my oven.
Posted by Bianca at 8:26 PM

Welcome back! Your kitchen is so cute. Sunny! And lucky you that Memphis has a vegan restaurant.

I'm so glad you're back! For selfish reasons, you got all kinds of good food! :P

Your kitchen rocks! And that pizza is making me hyperventilate!

Glad all your pets are happy!

looking forward to what you bake in your new oven!

That kitchen is a beauty!!

I'm glad you got through your move ok :]

Glad you are back!!

That kitchen is AWESOME!!

Furry kids are not fun to move with at all. Have fun in the new place.

I want your kitchen! it's at least three...no, FOUR times the size of the ones we have here.

Sooooo relieved that the move is over!! Hooray!!

Soo lovely of Vko to send you the doggie products!! :0)

Mmm, that Mushroom Lovers Pizza looks insanely delish; as does that soup!!

yay, you're back! wow - your kitchen is HUGE!!!!!!!!! i'm glad the move went well, Bianca! and i'll keep that Rescue Remedy stuff in mine, next time i take my kitties to the vet, you know? they hate traveling, too! poor boos!

can't wait to see what you make in your glorious kitchen! superw00t!

Seriously girl, best looking pizza I've ever seen.
I'm glad you have a new home with a great kitchen. I might have to move again soon, I get the shivers just thinking about it...

That pizza....whoa. It's so incredible!

Congratulations on the move! Enjoy the new kitchen.

Glad to hear that you are finally moved in and getting settled! And what a kitchen, I have serious kitchen envy right now!

That pizza looks fantastic, as does the soup. I can't blame you for not having cooked yet, but I bet you are excited about getting to use that fabulous kitchen.

Your kitchen looks great. Look at all the counterspace! Enjoy, and can't wait to see what you're cooking.

love the kitchen, love the pizza, love the pet drops, and love the convenience of making prepared foods.

Hi Bianca - can you provide information on the location of Deja Vu? I can't seem to find any info on the web. I live in Oxford, MS, but would happily make a trip to Memphis for some good vegan food.

Welcome back! Your new place looks great, can I come over for soup and pizza?

hoorah!
that kitchen is awesome! and YELLOW!
what happy kitchen adventures lie ahead....

Moving six cats! Do you have six cat carriers? I want to move, but the thought of moving my cats makes me say 'forget it'!

Welcome back and congrats on getting a bigger kitchen.

Yay! I'm so glad you got all unpacked! I was serious, by the way - I want to come cook in your kitchen! I'm so jealous :)

So.... when is the housewarming party???

Oh yeah, and we have GOT to go to DejaVu soon! I really want to try it. Also, your parents are awesome.

A vegan restaurant in downtown Memphis??? I've got a visit planned in a couple of weeks; I'm definitely putting that on my list!

And that yellow kitchen is awesome.

I am so envious of your big kitchen! I know you will make great use of it.

Glad the move went well and thanks for the rescue remedy tip. I have one very stressed out kitty who could really use this.

Hooray for your beautiful new kitchen! VKO is amazingly sweet for sending you Rescue Remedy for your fur children. I hope you have a wonderful time renting this house; it seems like your move was a blessing in disguise. :)

You have the biggest kitchen ever! I am so jealous!! So glad you're moved in and the kitties are happy!

I am completely jealous of both your big kitchen and that amazing looking pizza! Our kitchen is not very big, and the other day while I was cooking I actually had one of my big dutch ovens half full of food sitting on the floor of the kitchen because I'd run out of counter space.

Oh my gosh, a big kitchen is my fantasy... I hope you have a blast in it!! That pizza looks deelish.

I loooooove your kitchen! The painted cabinets and the crown molding are quite fabulous :)

Cuuuute kitchen! Great looking pizza (who needs cheese when you've got all those great veggies on it) and soup (love Fantastic stuff).

This is a beautiful blog. I just found it today and I love it so much.

Hi! Can someone tell me where the Deja Vu Restaurant is in downtown memphis? I keep looking it up but can't seem to find anything.

Hey!
Can someone tell me where Deja Vu is in Memphis? I live here. I've been googling but I can't find it.

What an adorable kitchen! I just want to hug it. :)

And your dad is so, so awesome for making Vegan Essentials orders for you. Getting a box of mystery vegan goodies in the mail would be the best surprise.

Thanks so much for the info!
Oddly enough...I can't see my comments that I wrote to you
New to this whole thing.
Can't wait to try it. We are headed to Sawaadhi tonight!
Any other recommendations...I would love them!

Hot damn! I want that pizza. Glad you are done moving, it's the worst.

Your new kitchen is so cute! I love the color. Having a non-apt sized kitchen is awesome. I'm not sure I could ever go back...

Rescue Remedy is the bomb! Also, that pizza looks wicked good. Glad the move was a success!