There's a section in the latest issue of VegNews (March/April) called "High on Hemp" with hemp seed recipes from Dreena Burton. Hemp seeds are high in Omega-3's and amino acids. I bought a back of shelled hemp seeds in Nashville this past weekend to try out a few of Burton's dishes. 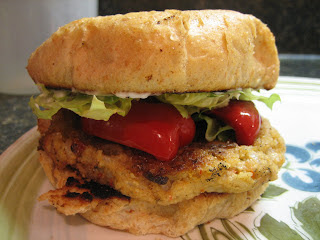 Served on a wheat bun with Veganaise, spring greens, and pickled red peppers, it was delish! The patty consists of brown rice, hemp seeds, diced red pepper, onion, garlic, herbs, and spices. I lightly pan-fried the patty in coconut oil. I had to cut the recipe in half though because it makes 8 burgers. My freezer's pretty packed, but I'll eat the other 3 patties throughout the week for leftovers. 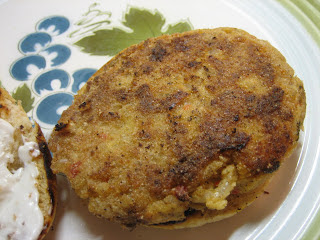 On the side, I had a salad with tempeh bacon: 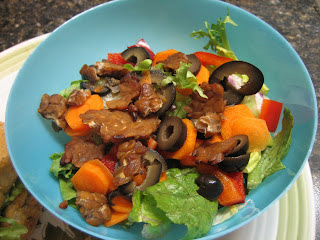 I made the bacon for a "cheesy" grits recipe I'm testing for the cookbook (pics to come tomorrow), but I had plenty left over. It was great crumbled over salad in place of bacon bits, which are full of trans fats (unless they come from the health food store, but I keep forgetting to pick up bacon bits at Wild Oats...). BTW, you can't see it here, but I dressed the salad with Amy's Goddess Dressing (the best stuff ever!).
Posted by Bianca at 11:42 PM

I'm totally addicted to hemp seeds. When I first bought ED&BV I went out and bought hemp seeds so I could try all her delicious recipes. I have yet to try those burgers!! They look uber yummy.

I love Dreena even more for her hemp seed recipes. I always have some at home. I can't get any shelled over here, so everything I make with them gets extra crunchy. The good thing is, I can sprout them.
I haven't made the burgers yet. After looking at your picture and reading your description they look very tempting.

so? where do I get a recipe for those amazing tempeh bacon bits?

Oh yay - consider yourself tagged, then!

Yeah, it was pretty bizarre at the time, my parents thought I was insane. I was (barely) 17 and he was 21. Can you imagine their faces when I told them he wanted to come for a visit? What a crazy time that was!

Those hemp burgers look awesome! And I'm with Alice - how did you make your tempeh bacon bits?

I will be there tomorrow - thanks for reminding me! I may be able to get my friend to come along this time, we'll see. See you then!

I really want to work with hemp seeds, but haven't been able to find any here in Columbia yet. I know as soon as I do though, I will have plenty of recipes to try them out!

Gotta love that tempeh bacon! I jut tried it a few weeks ago for the first time, and I love it, even though I never liked regular bacon.