Hemp seeds are kind of expensive, at least for my cheap taste. Since I purchased a bag of hemp seeds to make Dreena Burton's Spicoli Burgers last week, I decided to also try her Apple Hemp Muffins. 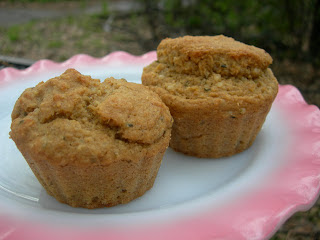 The recipe is featured in the March/April issue of VegNews. I've been eating a couple of these every morning since Tuesday, along with a banana and a glass of pecan milk (leftover from Monday's raw food day). Tasty, wholesome, and quite filling.

Unfortunately, I accidentally bought applesauce with high-fructose corn syrup to go in the muffins. I should have read the ingredients. Oops! The recipe called for unsweetened applesauce, but I didn't specify "unsweetened" on my grocery list. And I never would have imagined applesauce would be sweetened with nasty HFCS. Never trust the food companies, I guess.

Yesterday, I was tagged by Kittee Kake to name five things about myself (I actually planned on stealing this survey from Poopie Bitch two weeks ago, but forgot). At the end of this post, I'll tag five others. So here goes:

1. I graduated with the highest GPA in my college department (College of Communications) at Arkansas State University in 2002. I had a 3.8 GPA. In high school, I graduated with a 4.0. But in real life, I'm a little ditzy.

2. My degree is in Photojournalism, but except for taking food photos, I rarely put my skills to use. Now, I'm a reporter for an alternative newspaper.

3. I have an unhealthy obsession with the emo-punk band Fall Out Boy. I don't care how uncool that is. Pete Wentz is a hottie (even if he did just get engaged to Ashley Simpson). Drummer Andy Hurley is a vegan, by the way.

4. I'm the mother of five wonderful critters. Datsun, my 80-pound mutt, is the oldest. Then there are four cats — Akasha, Pandora, Polaris, and Gelfing. Datsun's a good dog, but the cats are evil. Though I pay the bills at my apartment, the cats rule. They lay wherever they want (kitchen counters, etc.), break whatever they want, eat whatever they want (plants, herbs, my shoes).

5. I have two tattoos and six piercings (if you count the ears). Both ears are pierced twice, my tongue is pierced, and my labret is pierced. The VEGAN tattoo you see in my blog pic is on the inside of my right wrist. I also have a Brian Froud faery on my back. I'm an air sign (Libra) so I love faeries!

I'm tagging:
Jennifer at Veg*n Cooking and Other Random Musings
Kumquat Peekaboo at The Path of the Vegan
Veggie at So What Does a Vegetarian Eat Anyway?
Mihl at Seitan Is My Motor
Alice at Alice In Veganland
Posted by Bianca at 11:01 AM

I truly wish I could find hemp seeds! This is torture.

I love the names of your critters how creative!

I know so many people (including myself) who's job has nothing to do with their degree (I have a degree in psychology and sociology and work in Institutional Research - go figure). How cool that you work for alternative newspaper. These little tags are so fun.

Ah!!! Now I have to think of five things to tell others about myself.....

I always knew you were smart-- one can tell just by reading your well-worded posts.

Haha, everyone in my high school always wondered how our valedictorian ended up being valedictorian-- she was seriously soooo ditzy!

You will think I am the biggest baby, but I swore off ever piercing anything ever again after I got my ears pierced at age 6 and cried for an hour (although, now that I think about it, the crying was probably more for attention than being in actual pain!).

And don't give up on Pete Wentz-- you know celebrity engagements never last! (Of course, I think you should go for the vegan!)

I love that "VEGAN" tattoo you have - always wondered if it was your arm on the picture. And I love your children's names too. I have 2 tattoos as well, but I'm about to have 3 more done. One of them will be related to veganism. I'll post a picture afterwards. Tattoos are cool and an addiction.

Thank you for tagging me!
I also wish I could find hemp seeds, but I don't thing it's possible here.

Where did you find your hemp seeds? Please tell me you got them locally and not somewhere in Nashville!

Pita Wraps was definitely good, just watch it when they're dressing your pita. He almost put yogurt sauce on mine before I stopped him! The falafel was about $6, but it is seriously enough food for two meals.

I used to love red velvet cake until I really thought about what made it red - lots and lots of artificial red dye. I'm thinking about trying to develop a vegan red velvet cake using beets for color instead.

And yes, I will see you Saturday!

I'll check Wild Oats - I just might get lucky! If they don't have them, I'll be making a trip to Fort Worth soon and hopefully can find them there.

I'm addicted to hemp seeds. Absolutely addicted. I can't go a day without them! (Even though they're so pricy). I prefer them over flax seeds because they just taste fantastic.

I need to try those two recipes, especially the burgers! But those muffins look great too. I made some hemp muffins on Saturday and learned the hard way that they don't last long before tasting bitter... so make sure you eat them fast!

Have you ever tried hemp milk? it's my new favorite think. Chocolate hemp milk! Give it a whirl and you will not be disappointed.
My job is linked to my degree but now I want to do something completely different anyway lol. things just have a way of getting all changed around