Last night, I made Fetticine Alfredo from Skinny Bitch In the Kitch: 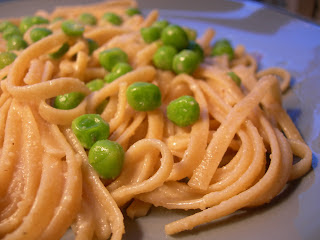 Now, it's been a LONG time since I've had this cheesy Italian dish, but if my memory serves me correctly, this tastes quite a bit like the non-vegan version.

And it was so simple to make. Traditional alfredo sauce consists of Parmesean cheese, heavy cream, and butter ... very unvegan. But this recipe subs coconut oil, soy creamer, and vegan Parm. I used the Galaxy Foods version because it's the only veg parm that Whole Foods carries. I've heard raves about Parma though, and I'd be eager to try this dish using it instead.

Anyhow, if you have the Skinny Bitch cookbook, I highly recommend trying this dish. Aside from the coconut oil (which is supposedly filled with good saturated fats, if there really is such a thing), this is a fairly low-fat dish. The Silk soy creamer is only 1 gram of fat per tablespoon and the Galaxy Foods parm is fat-free. The peas, which were optional, give it added nutrition. And of course, I used whole wheat pasta.
Posted by Bianca at 1:12 PM

I used to love alfredo, but haven't been so successful with a vegan version, so I'll be sure to give this one a try (shhhh, I'll copy the recipe from Barnes and Nobles, since I don't have the cookbook!)

It looks super tasty and I love the peas in it, yum!

Alfredo is probably The Brit's second favorite food, right after steak. If I could make a vegan version that he would eat, it would be a miracle, to say the least.

I will have to try until I succeed (or die trying)!

looks absolutely DELICIOUS!! I've heard nothing but great things about 'Skinny Bitch in the Kitch.'

I love the peas you added, they make the dish perfect! I don't own the book (shhh, chocolatecoveredvegan, could you send me the recipe after you copy it?), but I think I could try anyway, only without coconut oil (very difficult to find and very very expensive!)