A few weeks ago, my Granny e-mailed me a recipe for her Mandarin Orange Cobbler, a spin on the old-fashioned peach version. She even veganized the recipe before sending it (because she's awesome like that!). Last night, I wasn't terribly hungry at dinnertime, but I can't stand to let a meal time pass without eating, so I opted to have dessert in place of a full dinner. 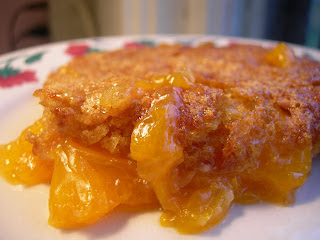 I can't even describe how tasty the crust is. Imagine if the best sugar cookie ever had babies with a moist yellow cake...that's about as close of a description as I can muster right now. All that was missing is the melty scoop of vanilla soy http://www.blogger.com/img/gl.link.gifcream. I did
have some Soy Delicious Turtle Tracks in the fridge, but I wasn't sure how the caramel would mix with the citrus.

I used canned mandarin oranges, but I bought the kind that come in their own juice instead of the nasty sugar syrup. I also subbed whole wheat pastry flour for the self-rising flour in the recipe, but added baking powder and baking soda.

I'd relay the full recipe here, but I've decided this one's going in the cookbook. I love that it's a cobbler, which is a traditional Southern dessert, but with a tropical fruity spin.

By the way, I've been tagged again to name five things about myself. This time, the tag came from the Brazen Vegan.

1. I kill plants. And not just because I like to eat them. I just don't have gardening skills AT ALL! Every year, I try to grow herbs, and every year, they just die. But last year, my basil survived for several months. I will try again this year...

2. I went vegetarian at age 14 after spending the week with my friend Purvi and her family in Oklahoma. They were Indian, and except for the dad, were all vegetarian. When I realized how easy it was to eat meatless meals, I vowed to go veg on the car ride back home to Arkansas. I went vegan at age 24 on my 10-year vegeversary.

3. I wasn't a fan of sweets until my best friend Sheridan bought me Vegan Cupcakes Take Over the World for Christmas several years ago. When I started making cupcakes, I magically developed a sweet tooth. It's decided to stick around for awhile, and I'm glad.

4. I was recently named one of 21 people in Memphis that "make a difference in the Memphis GLBT community" by our local gay newspaper, The Triangle Journal. The award was given to me because I write a lot of news stories on gay issues in Memphis for The Memphis Flyer, the alternative newspaper I work for. Stories on things like Tennessee's proposed gay adoption ban and other silly pieces of legislation that strip humans of their basic rights.

5. If you can't tell, I'm about as left of center as they come. I'm a bleeding heart liberal and proud of it. I voted for Hillary (I love the Clintons!) in the primary, but I'll vote for Obama in the general election if it comes to down to it. I'm pro-choice, pro gay rights, pro-universal healthcare, and everything else that liberals stand for.

I'm not tagging anyone because I think EVERYONE has already done this survey twice.
Posted by Bianca at 11:21 PM

Your grandmother rocks! I loved the idea of the cookie and the cake having babies, hahaha.
And it's good to get to know you a little better :-)

Have you tried growing sunflowers? They're fast, cheap & easy. If you could use a bit of the yard at your apt. you could also try growing the three sisters together- Corn, beans & squash. If you plant them so that they all grow together & kind of on top of one another they will take care of each other by choking out weeds & stuff, hence the name.

Great facts!! The one about you killing plants made me laugh, haha - sorry :0D But I especially loved reading about your journey to veganism - so interesting and inspiring!!

Your Granny is awesome veganizing a recipe for you. Mandarin Orange Cobbler, oh my goodness, what I wouldn't give for that right now, I love citrus.

Wow, you've been veg for a long time. Congrats to you.

That is awesome what you are doing to raise awareness on GLBT stuff. We should stop trying to stigmatize each other.

I'm pretty liberal myself (I just don't look it), I agree on everything you just said you were pro. :-)

Oh, that's a tease. I saw the picture, read the description, wanted to make it. Then noooo ... you didn't include the recipe!

You didn't like sweets? I am relieved that you changed your mind, he he.
The cobbler looks great and I had a crisp for lunch on Sunday. To me the dessert is the most important meal of the day!

ok, you are just too funny with your “sugar cookie had babies” comment. I am getting a really weird picture in my head. I’m going to have to buy the cookbook! Oh, and I am a HUGE fan of “dessert for dinner”. That way, you aren’t too full to enjoy dessert (not that one can ever be too full for dessert hehe).

Oh, and to answer your question, when I bike to WF, I bring an empty backpack, and I also have a basket on the front of my bike :o).

Yay for liberals! I think I might’ve been the ONLY one to vote for Kerry a few years back (I was excited to vote in my first election, but bummed that my vote was basically useless in Bush Country)… but there seem to be quite a few more of us this time around! Haha, and I think I’ve done that survey five times! I just did it AGAIN!

Your description of the cobbler killed me... what could be better than a cross between sugar cookies and moist yellow cake? You should call it 'love child' cobbler! :)

I had such a good time (again!) on Saturday - those tacos were awesome. I want more NOW.

Cool grandma! Tropical cobbler is totally a good idea. Maybe you should throw in some pineapple?

well you and are both cool b/c one- we're both lefties haha
and two- we both get dessert recipes from grandma :)

I really admire that you do so much for the GBLT community. And I too am a very left of center woman, and damn proud of it!

If a sugar cookie and cake had babies = LoL! That's a sexy mental image right there. Mmmm cobbler can't wait for the cookbook that one looks like a winner.

Yay for cupcakes!!!! Well...and everything else that makes you my awesome best friend. When am I going to see you again?? Hmm???

Hello! I'm also a Vegan from Memphis. I've only been vegan for about 3 weeks now and it's SO HARD!!! any advice you have for me being a vegan in memphis would be awesome! :)

Hello! I'm also a Vegan from Memphis. I've only been vegan for about 3 weeks now and it's SO HARD!!! any advice you have for me being a vegan in memphis would be awesome! :)