As I mentioned in yesterday's post, May 1st is Beltaine, a Gaelic holiday celebrating the fertility of the Earth and the abundance of Spring. Walpurgis Night is sort of like Beltaine's Christmas Eve. It's the traditional celebration awaiting the arrival of Beltaine....so I made a special meal to celebrate. Spring is my favorite season!

For the main entree, I created a new recipe for my cookbook - Black-Eyed Pea Corn Cakes with Roasted Red Pepper Creme. 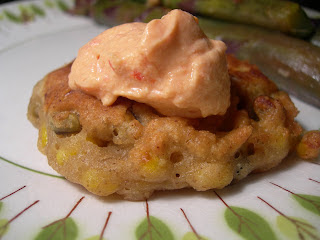 Basically, it's a fritter made with purple hull peas (pretty much the same as black-eyed peas...it's what I had in the freezer) and corn. The creme topping is a combination of silk tofu and roasted red peppers. The mixture of cool cream and hot fried fritter was like a party in mouth.

On the side, I found some AMAZINGLY HUGE purple asparagus. Check this stuff out! 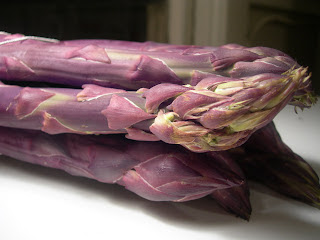 I've never seen purple asparagus, not have I ever seen asparagus this girthy. Even though it was a little more pricey than the regular old asparagus, I couldn't resist. I ended up boiling it instead of steaming like I usually do ... that's because the spears were too large for my mini-bamboo steamer. Unfortunately, like many purple foods, these guys lost some of their nice color while cooking. But they still tasted delish! 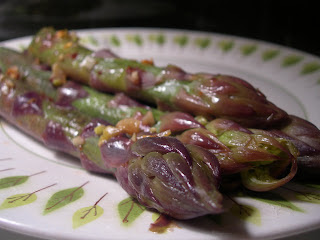 After boiling, I tossed it with some sesame oil, garlic, and crushed red pepper to make the "Sesame Asparagus" from Vegan with a Vegeance. The recipe also calls for sesame seeds, but I was out. The sesame oil gave the asparagus plenty of flavor though.

I washed it all down with homemade Agave Mead. My friend Leslie and I had a mead-making session in my kitchen back in February. Traditionally, mead consists of honey, water, and yeast. But since we don't eat honey, we substituted agave nectar. I also steeped my mead with herbs - jasmine, meadowsweet, and woodruff. It had to ferment for three months in a dark, dry place (my closet). Tonight, it was finally ready to crack open. I only had a small wine glass full, and man, this stuff is strong. It tastes like a cross between wine, beer, and rum. Good stuff.
Posted by Bianca at 11:58 PM

Agave mead?? OMG you need to do a whole post about this... it sounds awesome

May 1st is also workers day and it looks like you worked a lot to create those fantastic cakes! And you rewarded yourself with the agave mead, haha. I want to know more about it too!

Yay! Wine+beer+rum/vegan goodness= Wiberum! I can't wait to try the apple mead I made....it was still bubbly at the end of March, it's gonna be SO strong!

I just bought some organic purple asparagus at the market yesterday!

I can't wait for your cookbook!! Everything looks so goo. =)

Ooh and purple asparagus?? I had no idea it existed!! I need to find me some.

I'm really excited for your cookbook! You're not just throwing things together as you go, it seems like you are really taking your time to make sure you produce quality work. This is quality!

Those fritters are making me hungry, and your mead sounds amazing! I saw purple asparagus the other day too, but I talked myself out of buying it. Did it taste different to regular asparagus?

I just made chocolate mousse this week (for a pie!) and it turned out really good. I used 1 package of silken tofu and blended it until smooth. I melted 1 1/2 cups of vegan chocolate chips and added that to the tofu along with 1/4 cup Kahlua and a squeeze of agave, then spread it in the crust.

It was delicious, but if I were going to make it to serve right away I would add a little more liquid (maybe 1/2 cup soy milk instead of the liqueur) and probably heat it as well so the mousse would be more warm than it was. Add in a little flavoring and it would be great!

Uhhhh... Purple asparagus?! I have never seen that in my life, but I WANT IT! I love purple cauliflower, but I assumed that's where the purple vegetables ended. I'm on the hunt now!

*Does a happy dance*

When does this cookbook come out? I want!

Those asparagus are a thing of wonder.

That fritter looks absolutely delicious! Oh, and now I want to find me some purple asparagus!

Hi !.
You re, I guess , perhaps very interested to know how one can manage to receive high yields .
There is no initial capital needed You may start to receive yields with as small sum of money as 20-100 dollars.

AimTrust is what you thought of all the time
The firm represents an offshore structure with advanced asset management technologies in production and delivery of pipes for oil and gas.

Its head office is in Panama with affiliates everywhere: In USA, Canada, Cyprus.
Do you want to become an affluent person?
That`s your chance That`s what you desire!

I feel good, I started to get real money with the help of this company,
and I invite you to do the same. It`s all about how to choose a proper partner utilizes your savings in a right way - that`s it!.
I make 2G daily, and my first investment was 500 dollars only!
It`s easy to join , just click this link http://limudeto.envy.nu/zatabo.html
and go! Let`s take this option together to get rid of nastiness of the life

Hello everyone!
I would like to burn a theme at here. There is such a thing, called HYIP, or High Yield Investment Program. It reminds of ponzy-like structure, but in rare cases one may happen to meet a company that really pays up to 2% daily not on invested money, but from real profits.

For several years , I make money with the help of these programs.
I'm with no money problems now, but there are heights that must be conquered . I get now up to 2G a day , and I started with funny 500 bucks.
Right now, I managed to catch a guaranteed variant to make a sharp rise . Visit my blog to get additional info.

For sure you didn’t here about me yet,
my name is James F. Collins.
Generally I’m a venturesome analyst. recently I take a great interest in online-casino and poker.
Not long time ago I started my own blog, where I describe my virtual adventures.
Probably, it will be interesting for you to find out my particular opinion on famous gambling projects.
Please visit my blog. http://allbestcasino.com I’ll be interested on your opinion..

Sorry for my bad english. Thank you so much for your good post. Your post helped me in my college assignment, If you can provide me more details please email me.