Didn't do much cooking this weekend, but I did plenty of eating. On Friday, my friend Misti joined me at "Brooks Uncorked," a wine tasting at the Memphis Brooks Museum of Art. The annual event features 80 wines from around the world, a silent auction, and a lot of fancy food (most of which, unfortunately, was not vegan).

It was a swanky affair, so Misti and I glammed ourselves up. 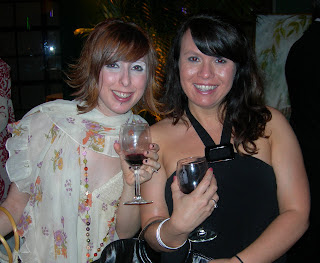 Now, I don't know how many of the red wines I tasted were actually vegan. I'm a "don't ask, don't tell" vegan when it comes to sampling wines. At events like this, most people don't even realize some wine is processed with non-vegan ingredients like albumen. So asking does no good. Basically, I'll drink it until I find out it's not vegan...either from stumbling over the info online or in a magazine. As far as I know, the albumen and/or isinglass doesn't actually make into the wine anyway. I'm probably a bad vegan for thinking like this.

As for the food, I could only eat the veggie sushi, the tasty three-bean salad (green beans, black beans, and a edamame), and some sort of citrusy white rice dish (it was kind of gross). 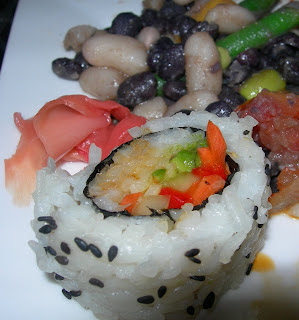 Unfortunately, no one told me there was going to be a whole roasted pig, complete with a terror-stricken face, in the center of the food area. I only glanced once, but it was too late. I'm totally scared from that moment. I don't understand how anyone in their right mind can eat something that has a face...that's just crazy and sad and gross.

Saturday was much more vegan-friendly! I met up with some folks from my veggie society, Food Awareness, for lunch at Java, Juice & Jazz (the new vegan soul food place that I keep raving about). Steph from Poopie Bitch was there with her sister and adorable nephew, and she may have pictures on her blog too.

Their menu changes daily, and Saturday's entree offering was vegan soft tacos made with seasoned TVP, guac, homemade salsa, black olives, and lettuce on spinach tortillas. The dish was served with chips and three dipping sauces - vegan cheese dip, salsa, and guac. So far, this has been my fave entree at Java. 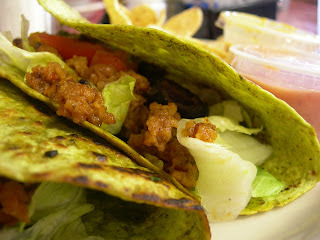 After lunch, we were all groaning about how full we were when our waiter came by and offered dessert - crumbled vegan cookies topped with bananas, strawberries, and mint chocolate sauce!!!! 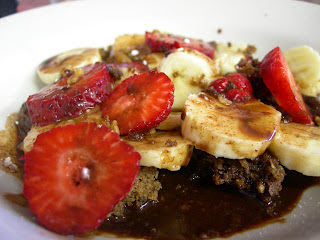 There was no way I could turn that down, no matter how full I was. Most people at our table split their dessert with someone else. But I came alone, and I'm not much for sharing food (I'm a pig, what can I say?). I ate the entire dessert by myself and spent the rest of the day miserably full.
Posted by Bianca at 6:12 PM

What a fun wine-tasting event!! Glad you had fun!!

Oooh, that vegetable sushi is so colorful!! Ack, that's terrible about the roasted pig - sorry you had to see that!

Tag! You're it! I'm tagging you to name five things about yourself that others may not know.

In the post, link back to my blog, and tag five others (also linking to their blogs).

Sorry if you've done this one before!

PSH- sharing dessert is completely overrated in my book! Glad you enjoyed your meal :)

Ew! I'm sorry you had to see that pig!

Sounds like sooo much fun (except for the pig, ugh). I understand how you feel about the wine. How would you even find out which is okay and which isn't? They aren't required to put it on the bottle are they?

In regards to my blog, what's your favorite musical?

Sounds like so much fun! I love wine tasting.

Man I'm sad that I missed an outing to JJJ....crumbled cookies sound gooood.
What is that flowery scarf type thing you have on in the first pic? It's really cute.

There was A PIG in the middle of the room? talk about losing your appetite...
I would have eaten the dessert alone too, no matter how full I were.

Woah, I wouldn't have turned them down either!

I love how your hair flips up; I wish I could get mine to do that!