Saturday was the Dutchman's 28th birthday! Since he's a car salesman and he loves, loves, loves cars, I made him a vegan car cake. He's not vegan, but when you've got a vegan girlfriend, you get a vegan cake. 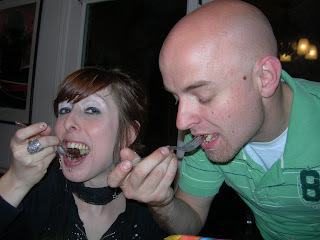 Now, I'm not gonna lie. I totally cheated on this cake. I used Cherrybrook Kitchen yellow cake mix and Duncan Hines Classic Chocolate frosting (which just so happens to be vegan). 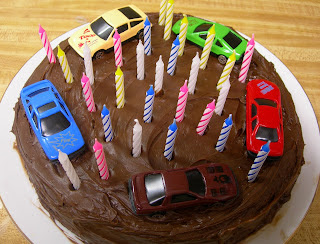 I'd planned on using some Cherrybrook Kitchen chocolate frosting, so it wouldn't be all trans-fatty. But it came in a box and you're supposed to mix it with soy margarine, which I forgot to bring to Nashville with me. I ran to the Kroger near the Dutchman's apartment, and all I could find was Smart Balance Light (only the light kind is vegan). I tried mixing it with the powdered frosting mix and the results were disastrous. It tasted diet and it wouldn't firm up. So I made another Kroger run to pick up some fatty, but tasty Duncan Hines.

His mom helped blow out the candles. Does that mean he has to share his wish? 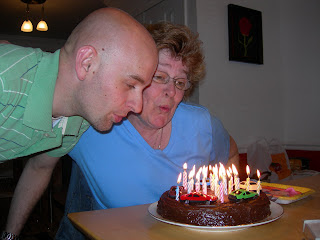 We enjoyed the cake and did the present thing at his brother's house. Even though it wasn't homemade, the cake was delish! Even his meat-loving mom liked it. So did his niece, Aleana, as you can see by the cake all over her face! 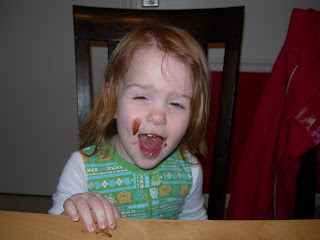 Happy belated birthday to the Dutchman! :0)

That cake is GORGEOUS!! SO fun for the occasion - your cake-decorating skills are impeccable!

Aw, how sweet of you Bianca! That cake is adorable.

Maybe you'll make a vegan out of him yet! Or not.

lots of good late wishes for your Dutchman! And the vegan cake looks great, I couldn't care less that you cheated :-)

That cake looks great! What a cool idea! Who cares is you cheated a bit? We all do it from time to time...

What a cute cake! And I agree with Romina; vegan cake is definitely > regular cake. :) I bet it was deeeelicious!

That is so sweet of you, and I love the car theme. I threw my husband a sesame street birthday party a few years ago!

Thanks for finding out 'bout the Doritos! I'm so glad. I'd already gotten my sister addicted to them lol. Anyways you're the best, thanks for being my detective :)

Belated happy birthday to the Dutchman :) That's one good looking cake you made! It's a semi-homemade? That's awesome, too!

hahahaha your cat story made me laugh! I think my dogs would be afraid of lizards. They are such fradey-dogs!

No worries at all about cheating! I routinely use Pillsbury frosting because of its vegan-ness. Did you know that even the cream cheese and milk chocolate flavors are vegan?! How odd!

I love the idea of putting toy cars on the cake—so cute!

The Dutchman is a lucky guy! And I think transfats are okay once in a while (okay, so maybe not so great for you, but whatevs), especially if they come in the form of chocolate frosting.

Haha that vegan car cake looks awesome!! Hope you had a great time in Nashville

Your cake turned out so cute! Good job! I'm glad the Dutchman had a good birthday - but more importantly, I'm glad you got to eat CAKE!