I've done a review of the Follow Your Heart Vegan Egg already, so this won't be a full review. But I just had to share with y'all this awesome Vegan Egg Breakfast Sandwich that I made using the Vegan Egg this week. 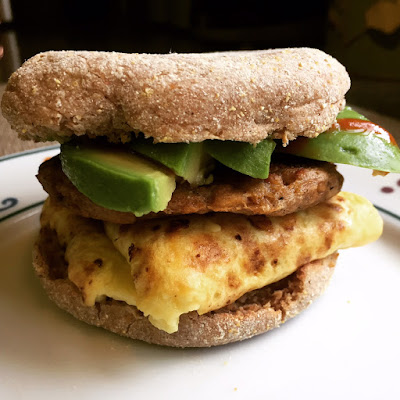 Just look at that awesome egg! It reminded me so much of the McDonald's egg breakfast sandwiches I used to love in my college days. I was vegetarian then, but I lived on egg & cheese biscuits from McDonald's.

In case you're not familiar with the Vegan Egg, it's a powder that you mix with water (I mix mine in the Vitamix for a fluffier "egg"). After mixing, it looks just like scrambled egg yolks. You pour it into a hot skillet, and it cooks up like scrambled eggs.

Up until now, I'd only prepared the Vegan Egg as scrambled eggs. But for this sandwich, I poured the wet mix into the skillet and left it alone so it would cook up omelet-style. When it was cooked through on one side, I flipped it and let it cook on the other side. I sprinkled the finished egg with black salt, folded it, and placed it on an English Muffin. That's topped with Gimme Lean vegan sausage, avocado, and hot sauce.

This was so good!! And the Vegan Egg was JUST LIKE AN EGG. I believe this sandwich would totally fool a non-vegan.

On another note, I got to see Gene Baur, founder of Farm Sanctuary, speak tonight at Rhodes College in Memphis. I first saw him speak at Vida Vegan Con in Austin last May, and he just blew me away. And the same thing happened tonight. He touched on all the important vegan issues — factory farm cruelty, health benefits of a vegan diet, the environmental degradation caused by animal farming, animal welfarism vs. animal abolitionism. If you ever get a chance to see him speak, DO IT! Here's me and my friend Megan (who once interned at Farm Sanctuary) with Gene. 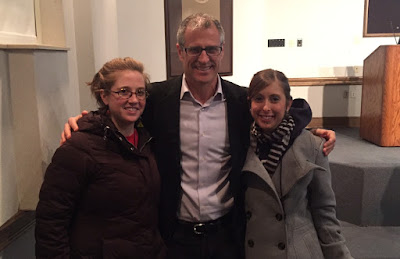 This looks great! Can't wait to try using this product. Thanks for the ideas