Confession: I started my morning off with a smoothie, not a taco. I did make breakfast taco fixins this week, and I've been enjoying those on non-running mornings. But this morning, I did a speedwork run, and my body just doesn't do good with solid food for at least an hour after a run. So I had this Mexican Chocolate Protein Smoothie with Vega One Chocolate protein, cashew milk, banana, cinnamon, cayenne, and maca. 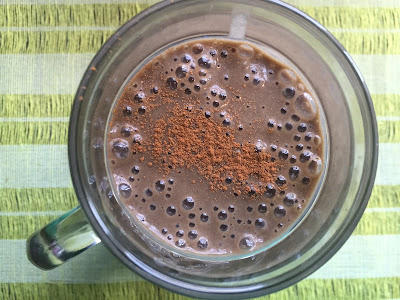 But I did have tacos for lunch! I stuffed my leftover Crispy Orange Bean Curd (tofu & veggie patties in soy-orange sauce) and jasmine rice from Jasmine Thai & Vegetarian Restaurant into corn tortillas. This stuff was amazing last night at the restaurant, but I really think it was even better stuffed into tacos at lunch. Everything is better stuffed in a taco. 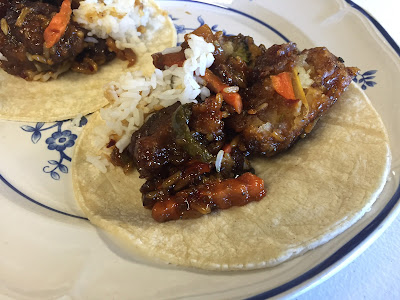 For dinner, I made some individual recipes from The Taco Cleanse cookbook — the book that's inspiring this week's all tacos, all the time diet — and combined them in corn tortillas. The book does include recipes for specific tacos, but there's also a chapter filled with individual taco filler recipes, so you can mix and match your own tacos. I made the Ion-Charged Refried Beans (slow-cooked pintos with rotel, onions, and roasted garlic), the Abundant Roasted Potatoes (garlic-roasted taters), and the High Vibration Kale Chips. I stuffed those into a taco with guacamole and Yellowbird Serrano Sauce. 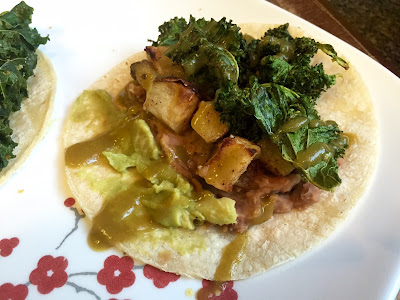 What a perfect combo! Beans, potatoes, and kale go so well together! Unfortunately, my oven-baked kale chips didn't stay crispy overnight (I prepped them the night before). I probably should have dehydrated them since my experience with oven-baked kale chips is they always result in soggy kale chips the next day. They were super crisp right out of the oven, but they didn't hold up overnight. They still tasted delicious though! Roasted kale really does have a special flavor that you don't get from dehydrating.

I made these tacos on corn tortillas instead of flour ones because I wanted smaller snack-sized tacos. I needed to save room for cupcakes, snacks, beer, and wine at Cassi's one-year anniversary for her vegan restaurant, Pink Diva Cupcakery. She had a little anniversary party tonight. 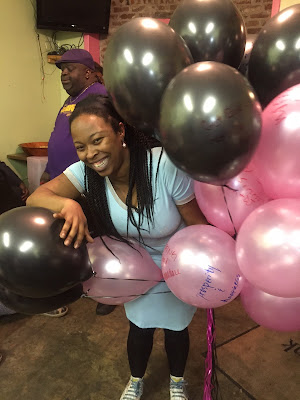 There were no tacos, but there was a nacho bar. I only had a few chips since I'd eaten tacos already. But I definitely got down on these Mini Grilled Vegan Cheeses. 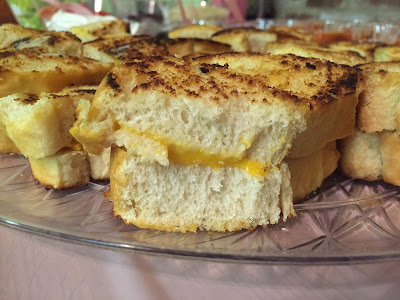 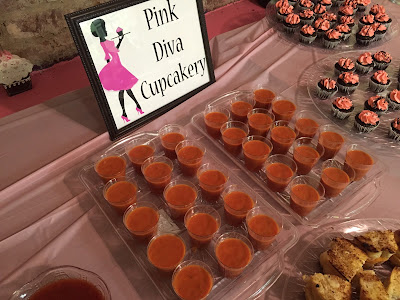 And most importantly, there were cupcakes! These were mini Chocolate Diva Cakes — chocolate cupcake, whipped topping, chocolate ganache. I had a couple! 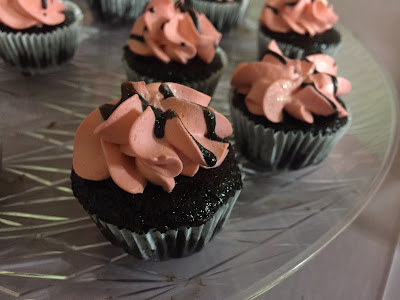 I'm so proud that Cassi's business has been open a year! She hasn't been in her brick-and-mortar for a year (that's been about six months), but she has been slinging cupcakes for that long. Before her location on Florida Street, she was selling cakes at Midtown Crossing Grill.

I'll continue my taco cleanse through Saturday. But I have a ton of taco fillings left, so I'll likely be eating tacos all next week too, and that's totally fine. I COULD EAT TACOS FOREVER! I will check back in with a taco update on Sunday.
Posted by Bianca at 10:17 PM

This looks so good! I know I can always find delicious and healthy treat whenever I visit your blog. :)
Can't wait to make this over the weekend.

I bet you could roast them and then dehydrate if you still wanted the roasting flavor but wanted them to keep crunchy.

Hmmm... OK, smoothies are probably one thing that don't lend themselves to any sort of taco variation. ;)

That is amazing that Cassie has been going for a year, please pass on my congratulations! Starting any sort of business seems like it would be a bit scary, but she seems to be doing so well! I hope I can visit one day. :)