So I only had one of my three Fat Tuesday traditions — king cake! And the rest of the day was all tacos and sangria but more on that in a few. Here's my Peanut Butter Cup King Cake! 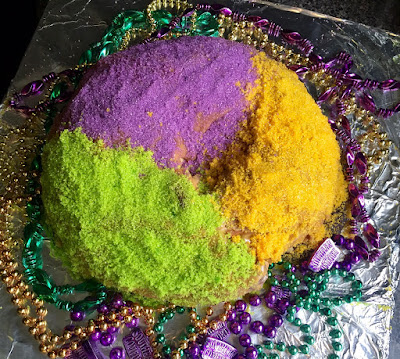 As I do every year, I turned to Kittee's amazing wealth of king cake recipes. I typically make her traditional cake and stuff it with cinnamon butter or, some years, vegan cream cheese and fruit filling. But this year, I went a little crazy and made her peanut butter chocolate king cake. It has peanut butter pastry, peanut butter frosting, and a chocolate mousse filling (made with tofu!). I brought this to work, and it was a hit. Only a tiny sliver was left at the end of the day. And just like last year, Toby (the reporter who sits in the cube next to me) got the baby. 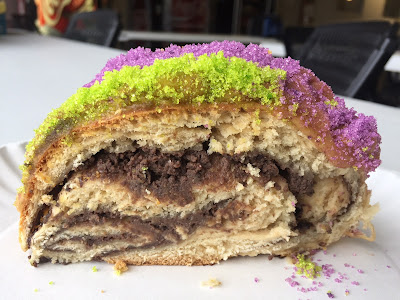 I know king cake isn't a taco, so I totally broke the all tacos, all week rule here. But hey, it's Fat Tuesday! But it's also Taco Tuesday, and I had the last of my Totcho Tacos for lunch. I'll miss them. I could probably eat totcho tacos for the rest of my life and be just fine with that.

Dinner was a new recipe from The Taco Cleanse — Soy Curl Fajitas! 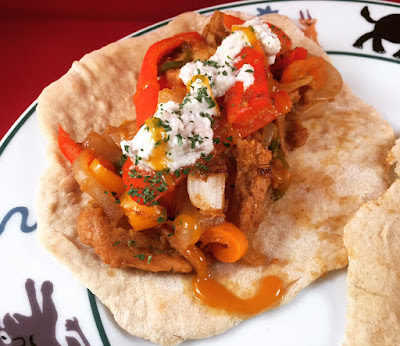 These were fantastic! Soy Curls are sauteed with red and orange bell peppers and onions, cumin, and fajita seasoning. I served these on homemade flour tortillas with homemade cashew crema (both recipes from the book). Lots of Yellowbird Habanero Sauce on top! The only adjustment I made to the recipe was to cut back on the oil. It called for 1/4th cup, but I used a half-tablespoon. One thing I learned on the Abundance Diet last month is that you just don't need that much oil to make something taste delicious. Oh, and I only used 1 cup of Soy Curls instead of two cups. It made less tacos that way, but Soy Curls aren't sold around these parts. So I like to horde them.

I'm hoping to work my way through the margarita chapter in The Taco Cleanse this week, but tonight, I went a little rogue and made a single-serve sangria instead. This isn't from the book. I had one glass of wine left in a bottle of cab sauv from the weekend, so last night, I added sliced apples and oranges and a shot of triple sec. I let that steep overnight, and tonight I served it with a splash of sparkling water. Sangria typically has brandy too, but I didn't have any, so here's my improvised sangria. 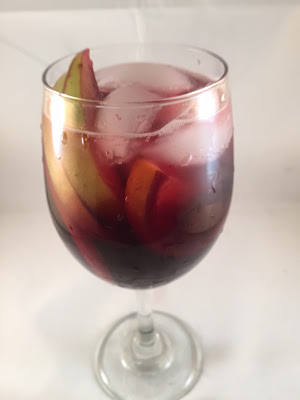 I am a soy curls hoarder, love the stuff!

his looks so good! I know I can always find delicious treat whenever I visit your blog.
Thanks for sharing!!

I love soy curls too! I can't get them here, in metro-Detroit, have to order them from Amazon. That cake looks amazing :)

I should really try making a king cake someday. I didn't even know there was a baby inside!

What an impressive king cake!! Sounds like a delicious combo too. Totally brilliant idea with your sangria.
And now I'm inspired to make my own tortillas!
Ttrockwood

Haha. I did the Abundance Diet with you, and am trying to keep up with salads and soups for daytime meals--at least through the winter. However, I was horrified by the amount of oil in both my non-abundance-diet soup and salad recipes this week! I reduced a lot in the soup (although I was tempted to omit it completely, and probably would next time), however I was hesitant to alter the salad dressing too much out of fear of ending up with a yucky mustard-vinegar sauce. And the sickly sweetness of diet soda, that used to be a special treat is now just bleh!

I think you're the only one who's ever tackled this, Bianca!!!
Happy belated Mardi Gras.

I made that recipe the other day and I have no idea why I used so much oil when I wrote it! I should back off in the reprint.