I love salt. Too much really. I salt my food while I'm cooking. I salt my food at the table. Sometimes, I just eat salt by itself — mostly just delicious seasoning blends, not plain table salt. Paul eats salt by itself too, and in much higher quantities than me. Amazingly, we still have totally normal, healthy blood pressure.

But we're not getting any younger, so cutting back on sodium might be a good idea. That said, I'm just not willing to sacrifice taste. But Salt For Life sent me some samples of their alternative salt blend to review, and I think it just might be the answer. 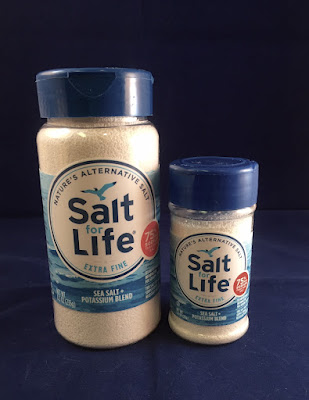 One-fourth teaspoon of Salt for Life has 140 mg of sodium, while table salt has 590 mg of sodium for that same amount. It's a huge difference.

Salt for Life is white and the granules are much larger than regular table salt, and when you sprinkle it on food, you can see the white flecks. I kind of like that because it's easier to see how much you're using. 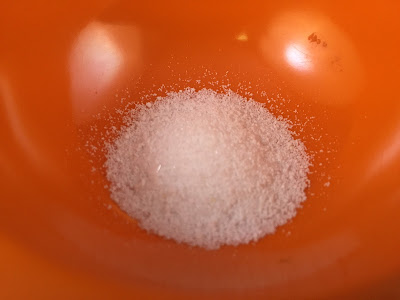 But how does it taste? Well, that depends. Sprinkled over food, it tastes like salt. And just a little goes a long way. But sampled by itself, you get a saltiness right away, but it's followed by a weird aftertaste. I wouldn't recommend eating it by itself, but why would you do that anyway (unless you're a weirdo like Paul and I)?

For the past two weeks, I've been subbing Salt for Life in my recipes and at the table, and I can't tell a difference in taste. My food seems just as well-seasoned as always, but I know I've probably cut my sodium intake in half. Plus, I've probably boosted my potassium intake as well. I'd definitely recommend this stuff!
Posted by Bianca at 9:50 PM

This is so good to know! I'm going to have to check it out! Thanks for the review!

I thought I was the biggest salt lover... but it has never occurred to me to eat it by itself, so I guess maybe I'm not!?

I want some Salt for life in Canada. I have high blood pressure, so I'd definitely like to give it a try.

Bianca, I really appreciate this post! Back when I was dabbling in Joel Fuhrman's nutritarian lifestyle some years ago, I struggled with the absence of salt. (I mean, the struggle was SO very real.) I could eliminate processed sugar and everything else deemed terrible but, ah, the salt! I even ordered from Benson's Seasonings, which claimed to be a "really good salt substitute." Yeah..okay. I'll definitely be checking this out.

Confession time: my sister and I have been known to pour a handful or a dish of seasoned salt for a snack. This looks like a great alternative.

Good to know about the aftertaste, I guess it wouldn't be very good for pretzels?

Bianca,
We couldn't be more delighted with your review of Salt for Life.
I simply wanted to let the folks know that you can purchase the product on Amazon.

Keep up the great work on your blog!
Best,
Dana at Salt for Life