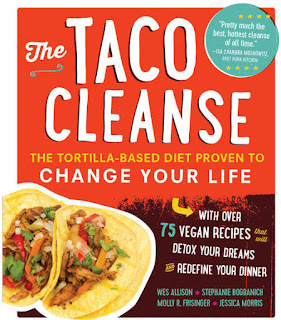 Y'all know I'm a big believer in cleanses. I know they're kinda silly, and I don't actually believe all that healthy food is cleaning out my liver and cleansing my aura or whatever. I definitely don't believe in those crazy maple syrup-lemonade cleanses or anything that involves depriving yourself of delicious food. Instead, my cleanses, like the Abundance Diet I just completed in January, tend to be whole foods-based and free of junk food but big on taste and portions.

But what fun is life if you can't poke fun at yourself? That's why I'm following my serious month-long January cleanse with a one-week taco cleanse, using recipes from the hilarious new satirical cookbook, The Taco Cleanse. It was written by Austin vegans/taco scientists Wes Allison, Stephanie Bogdanich, Molly R. Frisinger, and Jessica Morris, all of whom I had the pleasure of meeting at Vida Vegan Con in Austin last May.

Their book is filled with recipes for — yep, you guessed it — tacos! Breakfast tacos, vegan fish tacos, hot dog tacos, frito pie tacos, salad tacos, and so many more tacos. Plus, there are recipes for all the fixins (vegan cheese sauces, jalapeno ranch, corn gravy, guacamole) and all the fillings (tequila sausage, refried beans, cumin-onion rice, roasted butternut squash, beer-battered portabellos, etc). And you can't have tacos without margaritas, and there's a whole chapter for that too. Plus, taco yoga, taco gardening tips, and a guide to explaining the taco cleanse in social situations and raising kids on the taco cleanse, and taco-friendly tips for getting through the holidays.

My "cleanse" started today. For one week, I'll be eating tacos for breakfast, lunch, and dinner (and sometimes dessert!). I'll be using recipes from the book for most of my tacos, but I may freestyle a little and dine out occasionally. I'll also be supplementing with margaritas because tequila is a superfood, right?

This morning, I winged it with this Vegan Egg, Sausage & Hash Brown Breakfast Taco. There are several breakfast tacos in the book, and I'm trying one of those tomorrow. But I didn't have the fillings ready this morning, so I threw together a taco with what I had on-hand — Follow Your Heart Vegan Egg, Gimme Lean sausage, some shredded hash browns from the freezer, Daiya cheddar shreds, and Yellowbird Jalapeno Sauce. That was all tucked inside a homemade flour tortilla made using the recipe in The Taco Cleanse. Breakfast of champions right there. I only had one breakfast taco because I had brunch plans at 11 a.m. at Imagine Vegan Cafe, and I didn't want to be too full. 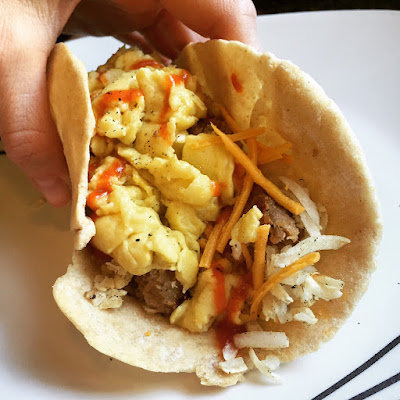 Alright, now I have a confession. It was doughnut day at Imagine. Owner Kristie rarely makes doughnuts, but she did this morning. And I ate one. It wasn't a taco. But it was delicious. Couldn't even make it to lunch without a cheat! Cheating was totally worth it though because this Vanilla Frosted Doughnut was deep-fried magic. Pam suggested that I fold the doughnut like a taco, but by that time, it was already half-devoured. 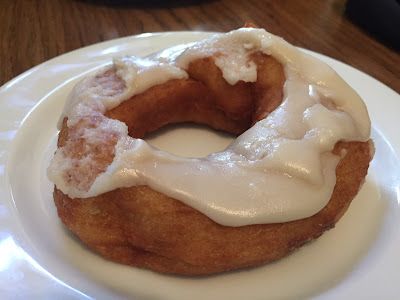 I stayed true to the cleanse with my brunch entree though. I went with Imagine's Vegan Chicken Fajitas — shredded "chicken," peppers, onions, brown rice, black beans, guacamole, sour cream, tomatoes, lettuce, and salsa. The number-one rule of Taco Cleanse is "a taco only has one fold." I usually roll my fajitas up, but I followed the one-fold rule with these fajitas. It was messy, but I survived. 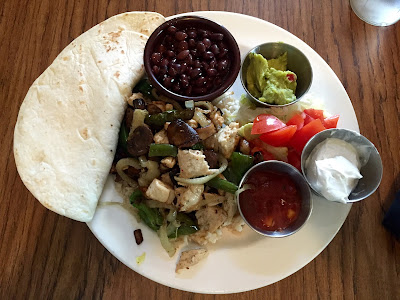 Most days on the Taco Cleanse, I'll be supplementing with margaritas (and a glass of sangria or two). But you can't drink margaritas during the SuperBowl! You gotta have beer for that. So I grabbed a build-your-own six-pack of Mexican beers from the Cash Saver. I poured a Tecate with salt and lime just before kick-off. 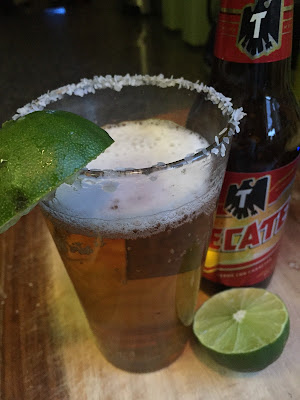 And just before halftime, I was plating up these Totcho Tacos from The Taco Cleanse. Yes, that's exactly what you think it is — tater tot nacho tacos. It's the stuff dreams are made of — tater tots, Parmela Creamery Chipotle Nut Cheese, guacamole, cashew crema (from the book), bulgur chorizo (from the book), tomatoes, pickled jalapenos, scallions, and cilantro. Totchos are pretty much my favorite food, so I knew when I first glanced through the book that I'd be making these right away. 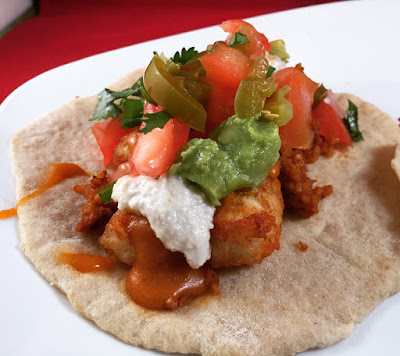 Check back tomorrow for more taco fun times!
Posted by Bianca at 9:40 PM

The taco cleanse sounds fun! Do they have dessert tacos too?

Do you make your own tater tots or buy them? What is your favorite brand?

They do have dessert tacos, and I'll be trying one later in the week — a churro waffle taco.

Cammie, I bought these at Whole Foods. They're the 365 Brand Tater Puffs.

This looks so good!Cannot wait to try this!
Thanks for sharing..

One day, I'll try a cleanse like yours. The food you ate last month sounded very yummy.

I've seen The Taco Cleanse on various blogs, but for some reason, I didn't know it was written in a satirical way. I love cookbooks that make me laugh. Suddenly, I want to get this book. I have very little experience with tacos though... I've only made 3 different types of tacos I think, but they were delicious. I'm looking forward to seeing the other tacos you'll be eating.

I felt elevated after a day of taco cleansing, after a week you shall be a glowing goddess!

Can't wait to see all your tacos. :D