Quick post tonight! I just wanted to share some pics of my Winter Solstice/Yule meal. Monday was the Solstice (and the Great Conjunction of Saturn and Jupiter, which will usher in the Age of Aquarius ... but that's a whole other story), and I celebrated with a feast and presents with the pets.

I'm off work until January 4th, and Monday was my last day before vacation. So as soon as work ended, I made a celebratory Yuletini. This (and all of the recipes I made) are from the Llewellyn's Sabbats Almanac, which has rituals, recipes, and astrology lessons for all of the Sabbat holidays. For this cocktail, I started some infused cranberry vodka back at Samhain (Halloween). I cracked that vodka open and mixed with whole cranberry sauce, orange juice, and sparkling water for this martini. 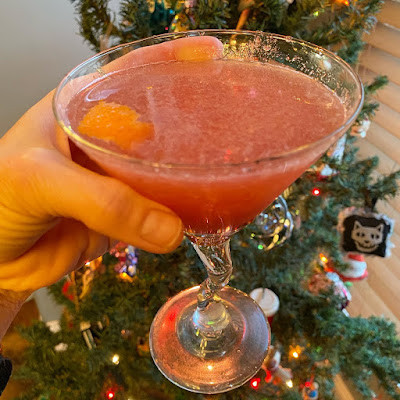 For the main dish, the Llewellyn's book (which is not vegan or even vegetarian) suggests a Lemon Chicken dish with crispy rice. I really enjoy veganizing these recipes, so I took on the challenge of making the lemon chicken recipe, which called for chicken breast.

I used Gardein Scalllopini, coated in cornstarch, and then fried in oil. It's topped with a sweet and tangy lemon sauce. The Crispy Rice Cake dish was already vegan — just white rice, salt, and margarine (I used Earth Balance). You just press the rice into a pan and cook, without stirring, until it is crispy on one side. I also slow-simmered some collard greens that were in my CSA using my Mess O' Greens recipe from Cookin' Crunk. 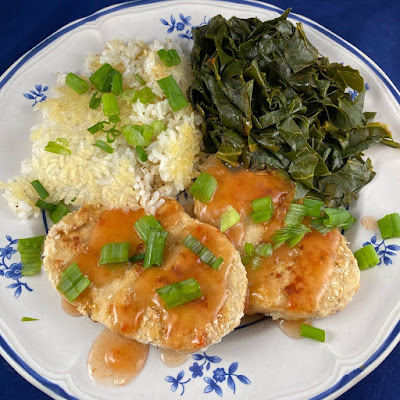 The dessert was the star of the show though! The Brandy Alexander Pie (like a pie version of the classic Brandy Alexander cocktail) called for heavy whipping cream, marshmallows, brandy, cream de cacao, and a cookie crust. 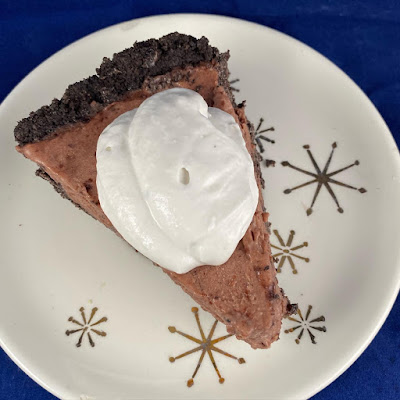 I used Sprouts chocolate sandwich creams for the cookie crust, Silk heavy whipping cream for the cream, and Dandies for the marshmallows. Cream de cacao is vegan, but I couldn't find any small airplane bottles, and I only needed 1.5 ounces for the recipe. So I googled substitutions for cream de cacao and found that chocolate syrup also works. I didn't have that either, but I found an easy recipe to make your own. For the brandy, I was able to find a tiny bottle of Paul Masson.

This pie was REALLY good! It's creamy and chocolately and has that slight boozy hint from the brandy. I've been enjoying a daily slice this week! Hope y'all have an awesome Christmas! I'll report back sometime next week!

I always love your celebration meals, and I really think you outdid yourself with this one!!!!
Happy Holidays to the whole Crunk family!!!!

YUMM!! Everything looks awesome, as always!