Darling Donuts has been killing it with the themed holiday boxes! I last ordered from my friend Lily's vegan donut business when she had the Spooky Box back at Halloween. She did Thanksgiving donuts too, but I knew I would be deep in pie that month, so I skipped those. But I couldn't resist the Holiday Box! I ordered a half-dozen on Saturday. There's Hot Cocoa, Sno-Cap, Pineapple Upside Down Cake, and Gingerbread. 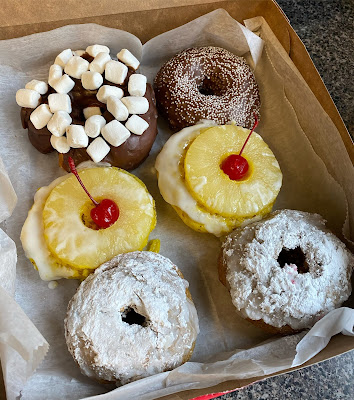 The Hot Cocoa and Sno-Cap are yeasted, and the others were cake. That was perfect for me because yeasted donuts don't stay as fresh, so I dug into those first. I had my last gingerbread cake today, and it was still moist and delicious.

I'd been craving Indian takeout for awhile, so last Thursday, after bootcamp in the park, I grabbed some Chana Masala with Roti and Samosa from Golden India. I rarely get Indian takeout because I prefer South Indian food, but Midtown only has North Indian restaurants. The South Indian joints are, like, 30 minutes away! 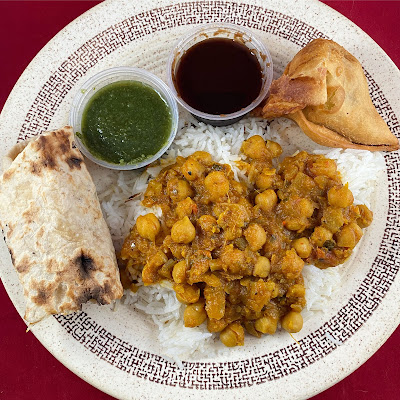 I also get nervous about ghee, but I noticed Golden India has added V's to some of their menu items, which I assume means "vegan" since the V wasn't by any of the vegetarian paneer dishes. I did see a few V's on dishes that clearly had yogurt listed as an ingredient. So I wouldn't trust those V's completely, but it seemed fairly spot-on. They also have a place where you can request special instructions when you order online, so I specified "no butter." With stuff like this, I just hope for the best.

Hillary of My Cat Loves Daiya has been blogging about Wil Yeung's YouTube channel for awhile. He makes awesome vegan Asian recipes! Last Wednesday, I had planned to make a tofu bok choy stir-fry with brown rice, but I was really craving noodles. So I google-searched "bok choy noodles vegan" and one of his YouTube videos for 10-Minute Weeknight Noodles came up! I checked it out and had all the ingredients, so I went for it! I added tofu to the recipe, and I used brown rice noodles instead of the flour-style noodles he uses. Fast and easy! 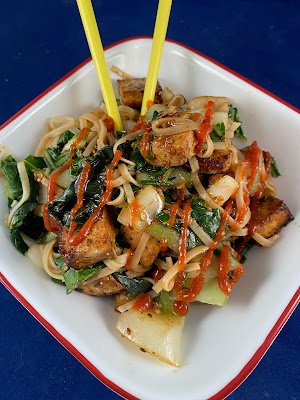 On Soup Sunday this past weekend, I made the Greek Lemon Rice Soup from My Best Vegan Comfort Food Recipes by FoodbyMaria. It's an e-book that I got in the No Meat Athlete Health & Fitness Bundle. This simple soup has brown rice, celery, carrots, onion, tahini, miso, and lemon juice. It was so warming and satisfying on a cold, rainy night. 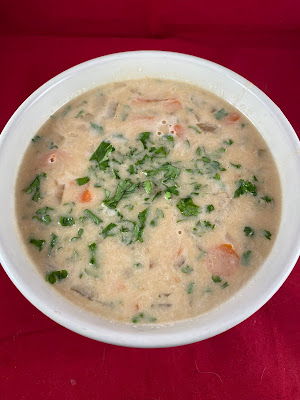 This morning, I used another e-book from the bundle — the Hooked on Plants Cookbook — to make these Superfood Quinoa Oats. This has a mix of quinoa, rolled oats, pumpkin seed, sunflower seed, chia seed, flax seed, goji berries, and dried cranberries, topped with maple syrup, blackberries, and coconut yogurt. It was a nice change from my usual morning oats! 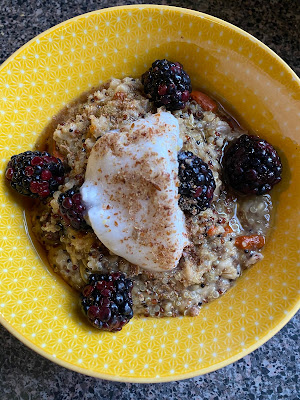 The doughnuts!!! OMG I never knew pineapple upside down doughnuts existed!!!! That used to be one of my favorite cakes!!
I love Wil Yeung, I think I might have a bit of an obsession!!!