Y'all! I ran a 5K! A few months ago, I crushed 5Ks (or more often 10Ks) for breakfast. But then I fractured my foot AGAIN while training for a 50K, and I've been out of commission since mid-August. I originally signed up to run the St. Jude Memphis Marathon (our largest running event in Memphis) on the day they opened registration back in June. It would have been my third year running the full marathon at St. Jude (and my fourth marathon in total). But after my fracture, I knew 26.2 miles was out of the question. 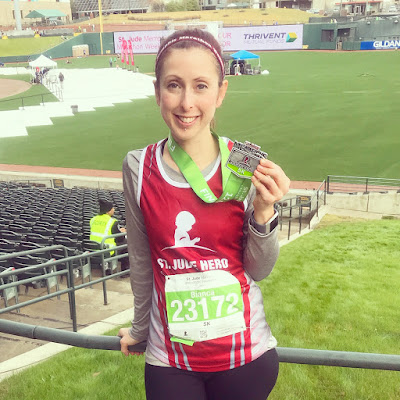 I bumped my registration down to the 5K on the advice of my doctor. It's incredibly humbling to go from training for a 50K to struggling through a 5K, but I made it! Granted, I walked a good chunk of the race for fear of hurting my foot again.

My foot is still sore at times, and I don't think I'm fully back in business yet. Thinking I should get one more X-Ray before I get back into the game. I'm so grateful that I was able to be part of St. Jude weekend through! This race raises an insane amount of funds for St. Jude Children's Research Hospital, which provides free medical treatment for kids with cancer and other life-threatening illnesses. The race and expo are HUGE, and it's such an exciting time for this city.

When I signed up to race the full, Paul signed up for the same. It would have been his first full marathon, but when he learned I couldn't run it, he chickened out and bumped his registration down to the half (his second!). I was so proud of him for going through with it! And then my friend Megan ran her first 10K at St. Jude, so we actually got to run together for a short bit since the 5K and 10K courses started out together before splitting off. 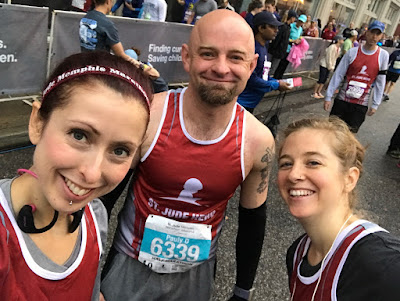 Megan and I enjoyed our post-race beers together while we waited for Paul. I couldn't believe they had my favorite Wiseacre beer — Tarahumara Dry-hopped Pale Ale (fans of Born to Run will recognize that name!). 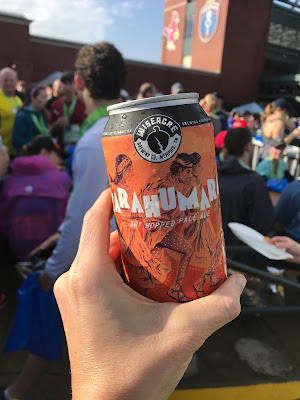 When Paul was finally done, we took many selfies. 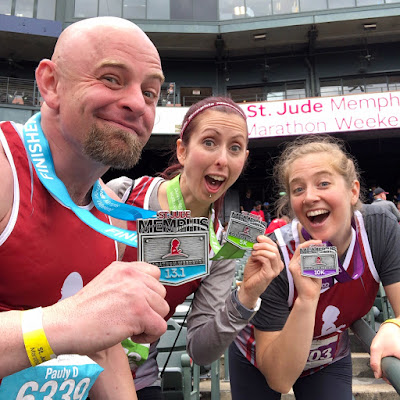 Here's what I ate on race day. I started the morning (at 4:45 am!) with a bowl of Rolled Oats with Strawberries & Walnuts. I typically add maple, but I was out so I added a teensy bit of sugar. Hey look, it's a picture of me running the St. Jude full marathon last year! 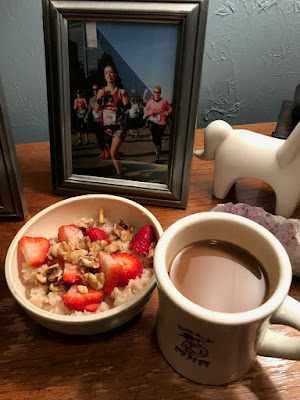 I had a banana right before the run, and then after, I picked up some Veggie Soup from the post-race party. They rarely have any vegan hot food options, so this was nice. Most years at St. Jude, it's freezing and this would have been perfect. But this time, it was about 65 degrees! 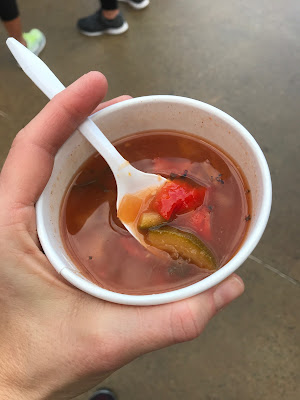 I packed a Picky Bar All-in-One Almond Bar in my gear check back, so I had that after my soup (also had another banana and a little free OJ for carbs!). LOVE these bars. They're made with real, whole foods and are designed for athletes. 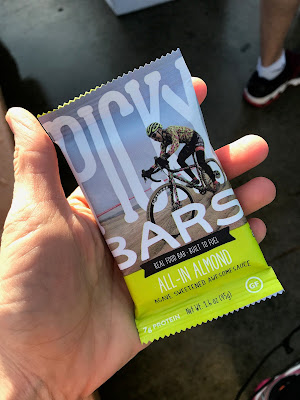 I also packed some Vegan Rob's Moringa Puffs in my bag because I knew I'd want something salty to snack on. Have y'all tried these? They're so good. After the run, Paul and I were pooped since we'd gotten to sleep a little too late for an early day. I had a slice of toast with hummus and then napped for about two hours. After I woke up, we tried to go to Fuel Cafe for pizza, but they were so busy that they ran out of dough (now that they're closing, everyone is trying to eat there one last time!). Sadness. Paul actually had been craving grilled cheese anyway, so we went to the Hitone instead.

The Hitone is a rock club best known for cheap PBR and punk rock, not sandwiches. But they recently brought on Josh McLane, a local comedian with some chef skills, and he's added a menu of snacks and sandwiches. Paul got his grilled cheese, and I ordered The Cara (a veggie sandwich with olive tapenade, marinated mushrooms, and sundried tomatoes). 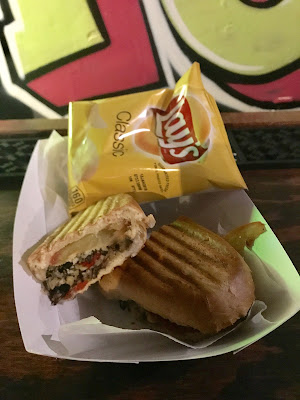 It comes with pesto and cheese too, but I left off the pesto (most contains parm) and I brought my own vegan cheese from home, which Josh cooked onto my panini. Very good! The white bread and chips were a nice post-run treat and felt very indulgent since I've been eating so well lately! Yay for treats!
Posted by Bianca at 6:00 PM

Congratulations on doing the 5K! I know it wasn't what you had planned on, but all things considered bet a lot of people in your situation would have just pulled out all together.
And congratulations to Paul as well.

Congratulations to all three of you! And I totally agree with Susan, a lot of people would have just pulled out! I've had the Vegan Rob's cauliflower and Brussels sprouts puffs.

I haven't tried the moringa flavor yet, I haven't even seen it! I've tried the cauliflower, brussel sprouts, and beet ones. I think the beet was my least favorite because it was much sweeter.

Congrats on the runs! Don't give up! Studies show that runner related injuries heal better when people don't stop running. I mean give it time to heal, but if you drop running all together, it more likely to give issues continued issues.

Congrats on the 5K and to Paul on the half! That is so amazing! Too bad you couldn't get your traditional pizza after but the sandwich looks great! I'm glad that you were able to still participate and I know you'll get back to distance running soon. You are definitely doing the right thing by allowing your foot to heal properly.

Yay for running! I've been there- it's funny how short a 5k can seem when you're running long distances, but what a triumph it is when you're coming back from an injury. They say that a stress fracture is 90% healed after a couple months, but the other 10% can take up to a year. You might feel some twinges, but it's okay to run. Also, stress fractures in the hip or pelvic area can be caused by weak bones (that's not you- you obviously have strong bones from all the plants you eat!) and fractures in the foot are more likely caused by a strength imbalance or a weakness in your form. Since this is your second foot fracture you might want to look into that. You want to come back stronger so this doesn't happen again! Congratulations to you and Paul!

Thanks Anonymous! That's great to hear. I've been so nervous to run since this second fracture is a re-fracture of the same injury! But glad to know I'm in the homestretch with that last 10%! I actually had another fracture (this is my third) in the opposite foot years ago that took about six months before I felt okay to run (it was soooooo hard to wait that long).

I do a lot of weight lifting and leg/glute strength exercises at the gym, but I would not be surprised if my form is the culprit. I've never really spent much time focusing on form, and I know I should. I'll work on that when I get back on the road! Thank you!