It's almost 2017! And thank god, right? 2016 has been a hell of a crappy year on a national scale, and to top it off, we lose George Michael and Carrie Fisher in the same week. Wtf?? Anyway, with the new year come new goals! I don't know about y'all, but I'm a big believer in New Year's resolutions, so long as they're healthy and achievable (and not coming from a place of body negativity or body shame). 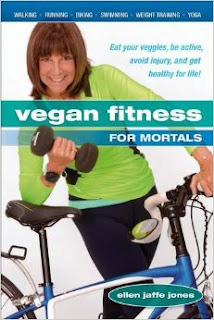 Like most people, fitness goals generally always top my list. Last year, I resolved to run a marathon in 2016. And I did! I completed the St. Jude Marathon in early December. In 2017, I'd like to run at least one more marathon (maybe two? three?) and a couple more half-marathons. I know I can PR my half-marathon time now, and that's in the list of 2017 goals. Additionally, I'd like to start lifting slightly heavier things and work on my arm game. As a runner, I tend to neglect my arms completely.

For any vegans looking to lay out a few 2017 fitness goals, there's a new book by my friend Ellen Jaffe Jones. It's called Vegan Fitness for Mortals, and it lays out basic plans to get started in everything from walking to running to swimming to yoga.

Ellen has written (and co-authored) a number of vegan cookbooks — Eat Vegan on $4 a Day, Kitchen Divided, and Paleo Vegan. But outside the kitchen, she's a fitness warrior. A few years ago, I had the pleasure of tabling with Ellen at New Orleans Veggie Fest, since we share a publisher (Book Publishing Company). At the time, I was training for my first half-marathon, and Ellen, who has run a number of marathons, gave me all sorts of tips and encouragement.

This book is NOT a cookbook. Instead, it's organized by chapter for warmups and cool-downs, walking, running, biking, swimming, weight training, and yoga. With each, Ellen provides some basics for beginners and tips on taking fitness to the next level. The yoga chapter includes 10 basic asanas, and the walking/running chapters include a couch-to-5K-style, day-by-day program for building up mileage.

Plus, there's a chapter on using body weight and walls/furniture for at-home exercises if you'd rather not join a gym. There's also a chapter on avoiding injury, which I could have used a few years back when it seemed like I couldn't run more than a month or two without an injury setback.

So where does the vegan part come in? There's a chapter on fitness nutrition with info on where to get your protein for muscle recovery, your carbs for fuel, your fat from nuts and seeds, your vitamins and minerals from veggies, and your electrolytes from fruits. And Ellen goes over her favorite breakfasts, snacks, lunches, dinners, and pre-workout treats. Plus, there are three smoothie recipes — the only recipes in the entire book!

If you're looking to get started in a new (to you) type of fitness, this book would be a great start! Happy 2017!
Posted by Bianca at 9:00 PM

What diet cleanse are you doing this January? I'll be trying one for the first time.

What happened to the Vegan Meatballs at IKEA post???? It was gone in a flash.

Oh sorry, Blake! That was supposed to be scheduled for tonight, and I accidentally hit publish when trying to save an edit. I'm sorry!! It goes live at 9 p.m. I was hoping no one noticed. Hahaha.

Anonymous, I'm doing a reset plan called Reset and Restore. It's actually not really a cleanse this time but just a super healthy eating plan — but with a focus on intuitive eating. The plan is run by Lacy Davis and Jessica Wilkins, and they're emailing me a meal plan later in the week. Can't wait!