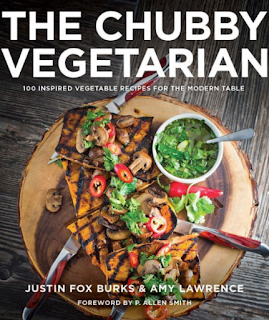 I'm lucky enough to friends with Justin and Amy in real life! They live in Memphis, and for years, Justin and I worked together at The Memphis Flyer where I was a reporter/editor, and he was (and still is) a freelance photographer. Amy is a teacher by day. But the pair also happen to share some serious skills in the kitchen. Justin does the cooking, food styling, and photography, and Amy does the baking and most of the writing. They're a great team, and they're lots of fun.

Justin and Amy are really into vegetables, and they excel at turning an ordinary eggplant or portabella mushroom into a culinary masterpiece. I'm typically more drawn to protein-heavy dishes with seitan or tempeh or even plant meat, so the dishes in this book are a little different than how I'm used to cooking and eating. But Justin and Amy are SO GOOD at making veggies taste great that when I make one of their dishes, I don't even miss the vegan chicken. If I had these guys cooking for me every day, I'd probably eat more veggies!

The Chubby Vegetarian isn't a totally vegan cookbook, but it's all vegetarian. Some of the recipes are vegan though, and any of the recipes are easily veganized with a few swap outs. The chapters are divided into the typical categories — breakfast, apps/snacks, sandwiches, mains, salads/sides, desserts, and sauces. And of course, the book is loaded with Justin's gorgeous full-color food photos!

Last week, I tried their Vegetarian Eggplant Tajine over couscous. Perfectly lovely! This is a simple dish of baked eggplant, tomatoes (from a can), chickpeas, bell peppers, and a Moroccan spice blend called ras el hanout. It's topped with Greek yogurt in their book, so I subbed a little unsweetened So Delicious coconut yogurt. 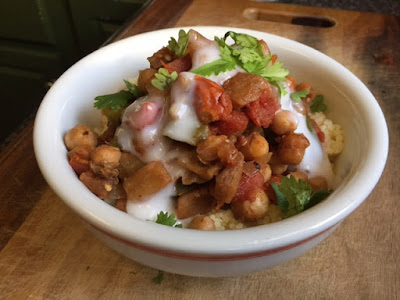 I didn't have any ras el hanout, and the international market that would probably carry that is pretty far from my house. So I just googled it and realized I had all of the spices to make the blend at home. It's just cumin, ginger, cinnamon, coriander, cayenne, allspice, cloves, and salt. My house smelled WONDERFUL while this casserole was in the oven!

I also made a couple dishes from the appetizers and snacks chapter last weekend for a potluck. These Veggie-Packed Napa Cabbage Wraps with Peanut Sauce were a hit! The filling was made from chopped cabbage, carrots, mushrooms, tofu, and peanuts, and the sauce was peanut butter blended with vinegar, srircaha, mirin, ginger, and sesame oil. 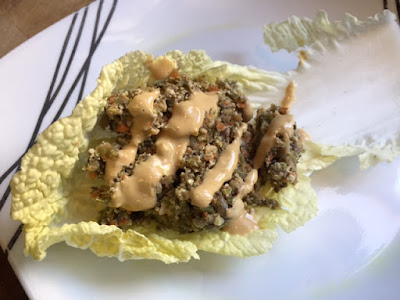 I'd actually had the Bagna Cauda Smashed Chickpea Dip before at my friend Susan's dinner party. She hosted an entire meal using only recipes from this book, and this was the app she chose. I loved it so much that I just had to make it again! It looks deceptively like hummus, but the ingredients are totally different. There's no tahini or lemon but instead white wine, capers, garlic, and rosemary. Really great with crunchy bagel chips! 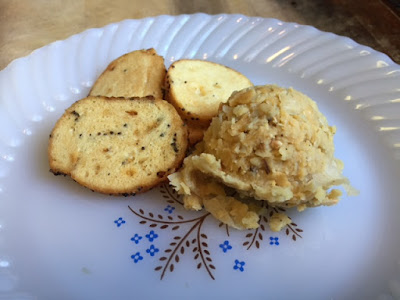 There are so many more recipes I want to try! The Vegan Breakfast Sausages (made with a base of mushrooms, carrot, and celery!), the Pepper Jelly Rangoons (with spicy jelly and cream cheese — vegan, of course), the Mexican pizza (with beans and avocado), the Stuffed Spaghetti Squash (with beans, tomatoes, carrots, celery, and vegan provolone), and the Nashville Hot Chicken-Style Hen of the Woods Mushrooms (fried!!!). Also, I was excited to see the recipe for the Chubby Vegetarian Debris Po Boy in the book! This is a sandwich that's served here in Memphis at a restaurant called The Second Line, and it's so freakin' good. Now I can make it at home!

I haven't tried making anything from the dessert chapter yet, but I know Amy's baked goods never disappoint. The Avocado Walnut Brownies could be easily veganized with some egg replacer, as could the Pine Nut Cookies (YUM!). And there are a few naturally vegan dessert recipes too, like Spicy Banana & Almond Date Bites (these are like date balls!) and the Frozen Peanut Butter Banana Pie, which I had the pleasure of trying at Susan's dinner party.

If you love vegetables (or if you're me and would like to love veggies a little more), then you need to check out this book, y'all. You can get it on Amazon right here. And while you're at it, check out their first book, The Southern Vegetarian Cookbook, which is packed with meat-free Southern classics.
Posted by Bianca at 4:15 PM

Yum, that casserole sounds right up my alley with the spices, and I want the Napa cabbage wraps! Looks like an amazing book!