For four years now, I've been doing cooking demos on the Celebrity Cooking Stage at Memphis' annual Southern Women's Show. My company, Contemporary Media (which publishes the Memphis Flyer), makes sure I have a spot on the stage each year.

Year to year, the turnout varies greatly. Last year, I had a very small crowd, and the year before my audience was packed. My first year, when Stephanie and I did a demo together, we had exactly five people watching (and I worked with two of them). Unfortunately, that one year when I had a huge crowd, I forgot the tempeh for my tempeh BBQ. That demo was a disaster, and I had to talk about what I would do if actually had my ingredients. Thankfully, I didn't forget the pre-made samples that year. 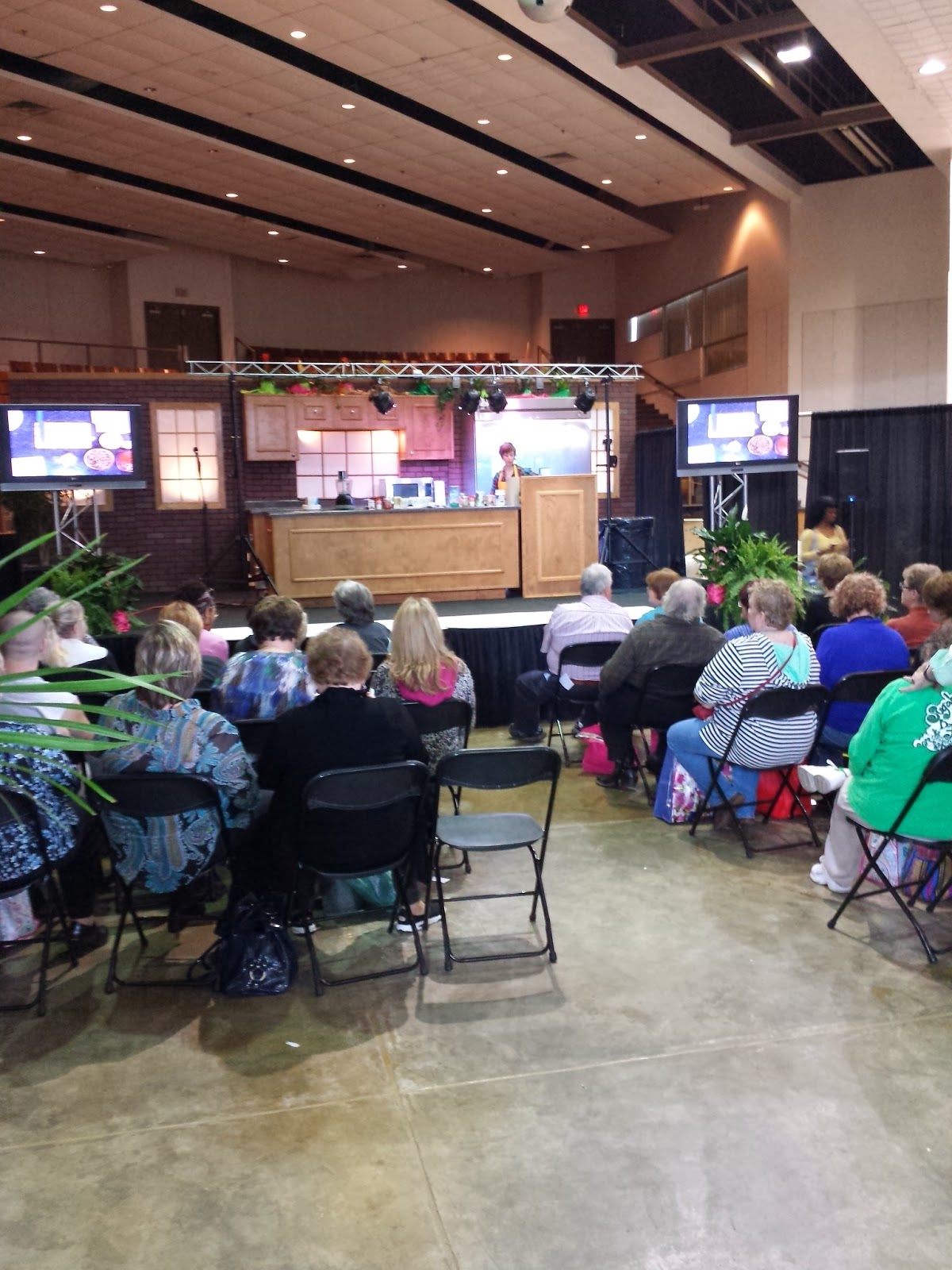 This year, the crowd was wonderful! Most of the seats were full, and the audience was engaging and asked great questions. Keep in mind that most of these people are not vegan, yet they asked great questions about flax eggs and coconut oil. I'm finding that, when I do demos these days, I'm far less likely to get the old "Where do you get your protein?" questions. The world is changing. Finally, people get vegan. 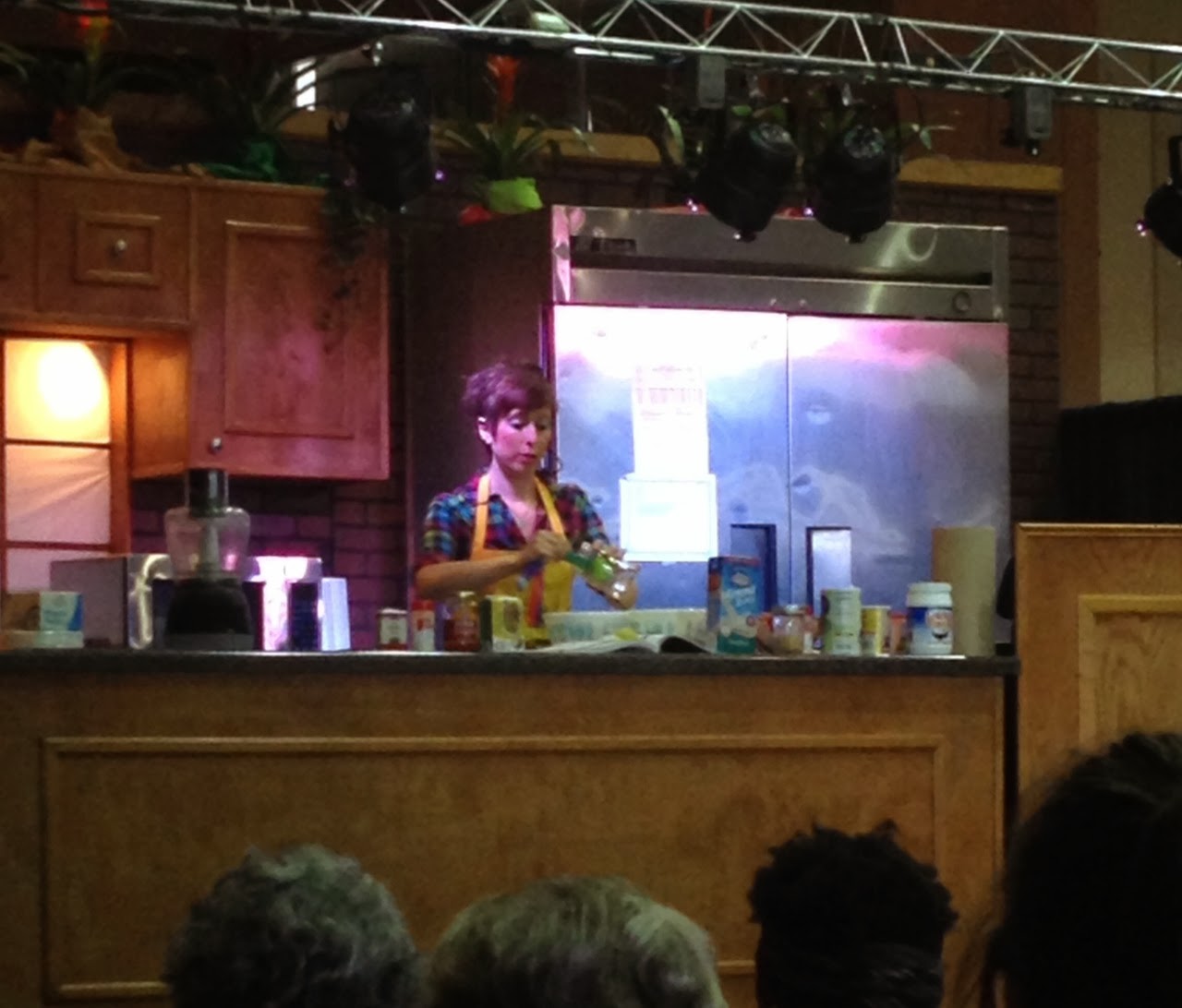 I made the Blackeyed Pea Corn Cakes with Roasted Red Pepper Cream from Cookin' Crunk. It's a fried recipe, and I chose that because I wanted to show people that frying doesn't have to be super-duper-unhealthy. I pan-fried the fritters in coconut oil and used whole wheat pastry flour in the batter. 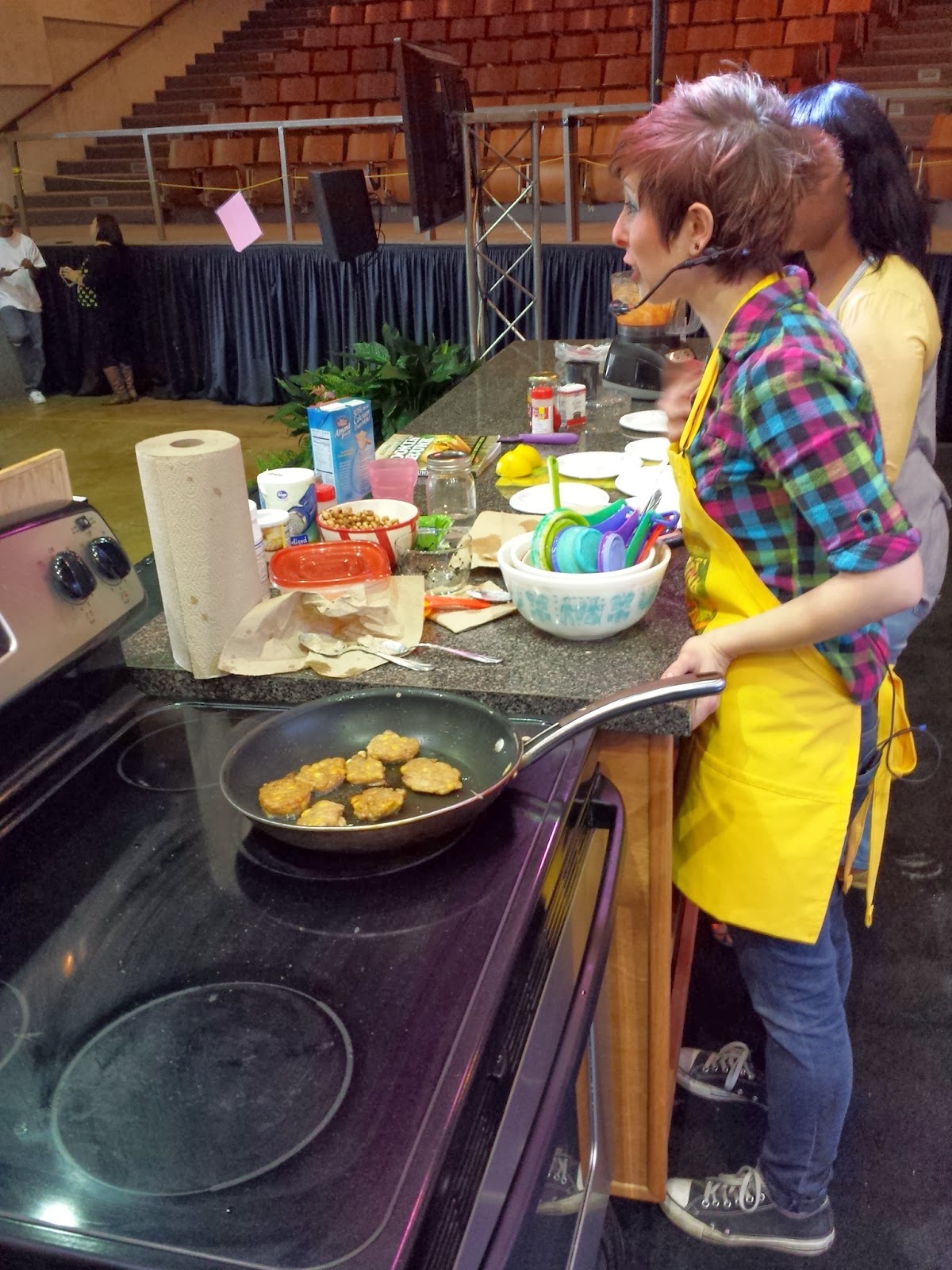 That set of shoulders beside me belongs to my friend Cassi of The Pretty In Pink Vegan. She and our friend Aisha joined me at the women's show, and Cassi was sweet enough to help me plate and hand out samples. Thanks Cassi!

Unlike with most demos, where the audience doesn't really get a good view of what I'm doing with my hands, the women's show stage is equipped with cameras above the stove and counter. 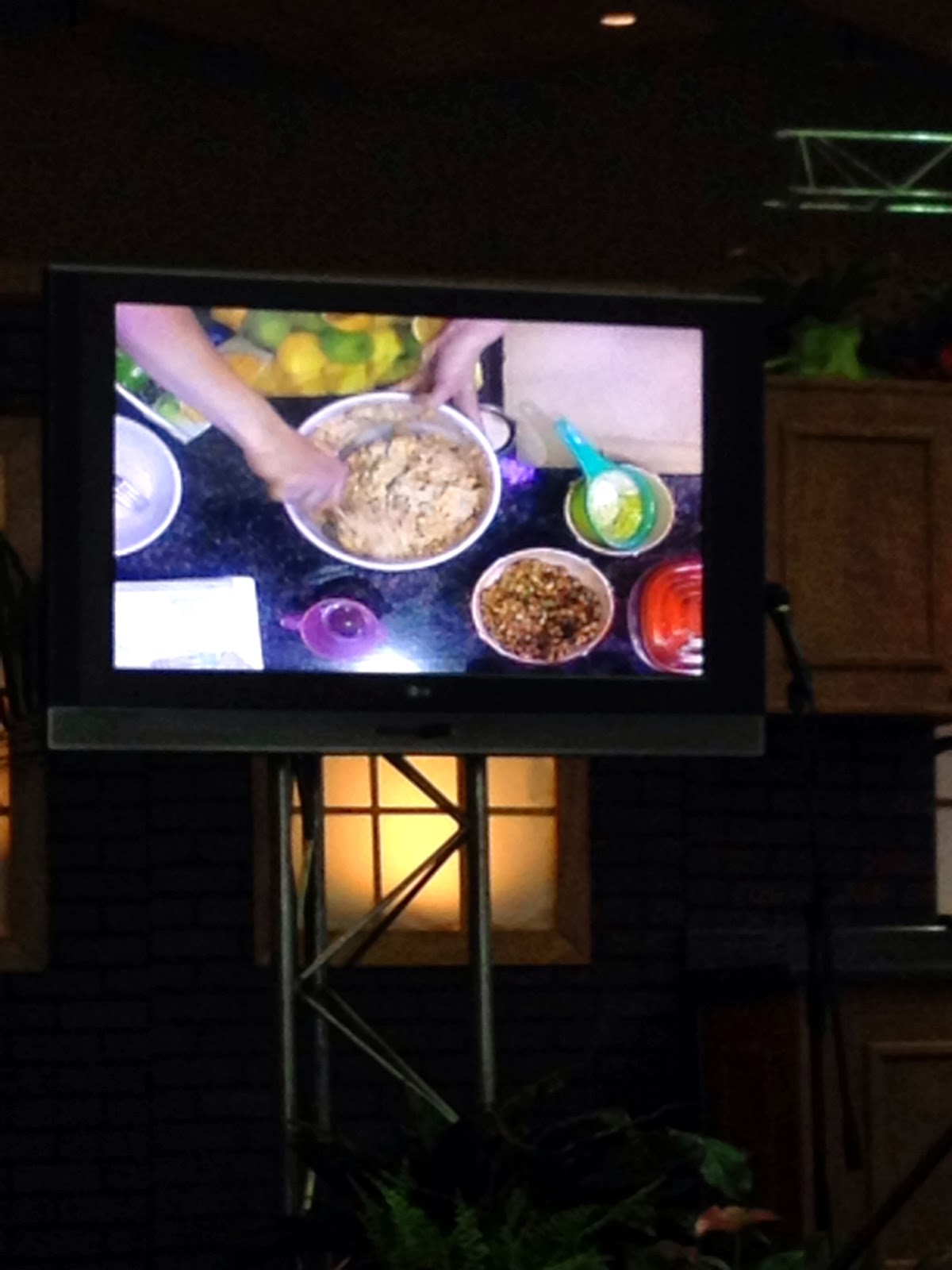 And here's a picture of the plated dish, taken when I made a practice batch at home before the show. 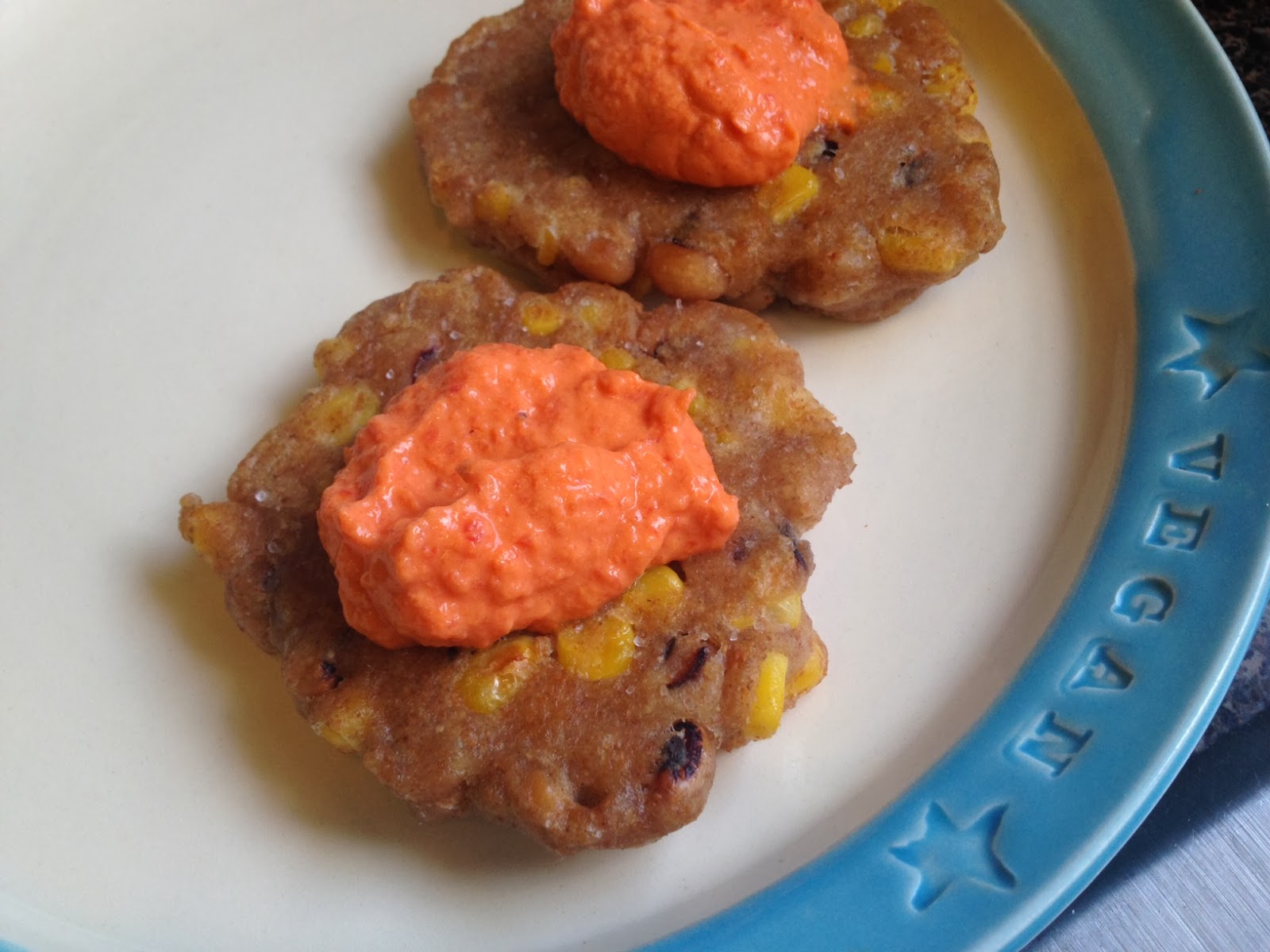 I promised the audience that I'd post the recipe online, so here ya go.