As I mentioned in yesterday's blog post, I try to eat the traditional foods associated with the seasons. It helps me feel more aligned with Mother Earth and all that hippie stuff. But the food most associated with Ostara (or the Spring Equinox) is eggs, which symbolize the fertility of the Earth. Since I don't eat eggs, I have to get creative this time of year.

I found a recipe for Potato Egg Bake in my seasonal Llewellyn's calendar. It's basically a breakfast casserole with veggies, cheese, and (!!!) five eggs. Eek. But you know what? Anything can be made vegan and delicious. I got creative and totally flipped the original recipe all around to create a Vegan Potato "Egg" Bake. 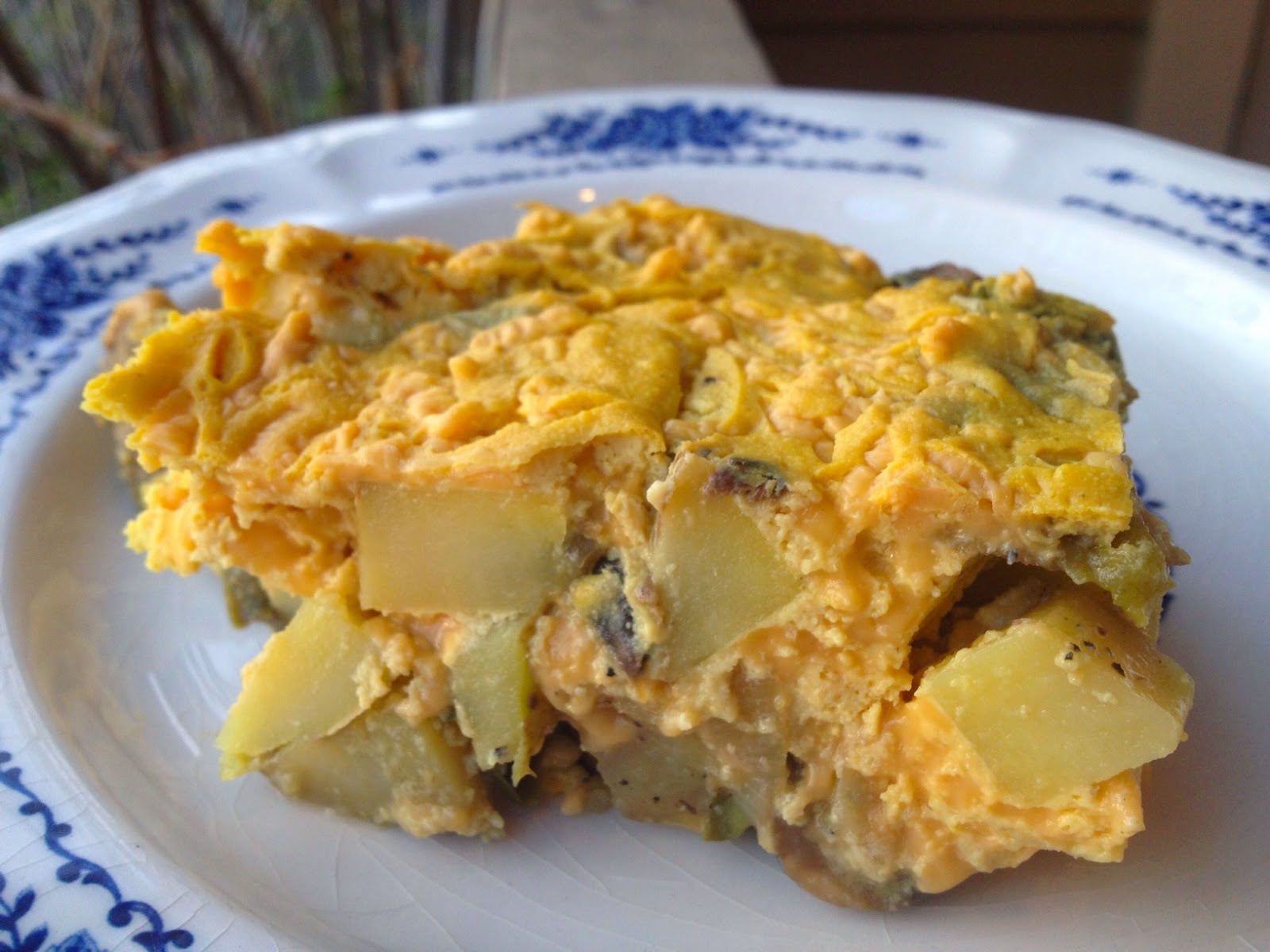 It's flecked with potatoes, bell peppers, onions, mushrooms, and vegan cheddar. And that's held together in a yummy baked tofu omelet. Of course, I used Vegg vegan egg yolk in the recipe because I'm pretty much obsessed with this stuff. When mixed with water in a blender, it has the same taste and texture as egg yolk, so it really adds an eggy flavor to this casserole.

I'm sharing the recipe for my bake here. And then my pal Rocky, inventor of the Vegg, wants to give away an amazing Vegg prize pack to one lucky commenter. He'll include the original Vegg Vegan Egg Yolk (good for omelets, fried Veggs, tofu scrambles, eggy sauces, pasta carbonara, etc.), Vegg Baking Mix (perfect for pancakes, cupcakes, quiches, and other baked goods), and The Vegg Cookbook (loaded with recipes so you can put your Vegg to good use). Just leave a comment at the end of this post letting me know what egg-containing dish you'd like to recreate. BE SURE TO INCLUDE AN EMAIL ADDRESS if you don't have one attached to a Blogger profile. I'll pick a winner next Tuesday.

Place potatoes in a large pot, cover with water, and bring to a boil on medium-high heat. Boil until fork tender, about 15 minutes. Drain.

Heat the oil in a non-stick skillet. Add the onions and saute for 2 to 3 minutes. Add the mushrooms and bell pepper and continue to saute for about 6 to 8 minutes or until veggies are tender. Stir in the thyme, salt, and pepper and cook for another minute. Turn off heat.

Use a blender to whip the Vegg vegan egg yolk with the water (If you have a large blender, you may need to double the Vegg to water ratio, but only use 1/4 cup in the recipe. Save the extra for another use).

Pour 1/4 cup whipped Vegg into a food processor with tofu, chickpea flour, nutritional yeast, almond milk, turmeric, and black salt. Process until smooth and creamy, stopping once to scrape down the sides of the processor bowl.

Spray a 9x9 casserole dish with non-stick cooking spray. Layer half the potatoes, half the cooked veggies, half the cheese, and half of the egg mix. Repeat the layering process with the remaining ingredients. Bake for 45 minutes.

I'd love to try the vegg in some sort of custard. Spaghetti carbonara also sounds good; it was my favorite when I was little, although we called it "spaghetti alla bacon"!

I love deviled eggs with wasabi and chopped scallions. But this might be hard to make with faux eggs, since we would need to make the white part oval.

I think I'd make "egg" salad sandwiches - always had them for lunches when trying to use all the Easter eggs.

I would love to recreate a good vegan french toast - that was one thing I really missed is the eggy-flavor that using eggs in french toast creates. Using almond milk is a good substitute - but hopefully using Vegg would bring back those memories! :)

Oh, that Potato-"Egg" Bake looks delicious! I'd love to try that. I make a pretty good tofu scramble, but I would love to try a fried "egg" sometime too.

A really skinny crepe (not containing tofu or chickpea flour.)

I's love to make the scrambled Vegg's on their website! I'm also very allergic to flax seed, so have a good sub for them in various recipes would be nice.

Yum! This recipe looks amazing. I would love to use the Vegg to make this potato bake for sure. I would also love to recreate my childhood favorite egg-in-a-hole.

I'd love to try a quiche with the Vegg. Also some vegg pasta would be fun to try.

I'd love to make vegan huevos rancheros with lots of avocado!! :)

Ohhh miammm !!! This looks really yummy !!! I'd like to try it and other recipes with this samples; deviled eggs, etc.

Thanks for this wonderful giveaway :)

I would totally want to make this!!! Eggy casseroles always remind me of my mom making them for holidays, and I'd love to recreate a vegan version!

Giving up eggs has been one of the hardest parts of going vegan. I'll bet these 'yolks' would allow me to make "egg" noodles. There's nothing like fresh pasta!

Oh, this looks fantastic! I am totally adding it to the menu. As for veganizing an egg dish - I'm still working on perfecting an omelette, so that will be my answer for today!

I was unaware of this awesome sounding product. I can't wait to make my husband an omelette and me French toast or crepes. Yummmm.....
Khristine
khrishawth@gmail.com

I'd like to try to veganize a chile relleno casserole. Also, I'm glad to see I'm not the only one who can't figure out how to comment using my name.
Nancy

I'd love to try this in so many ways - huevos rancheros, french toast and frittata come to mind first!

I want to make a tortilla espanola! Which, actually, would be pretty similiar to your dish.

I would LOVE to recreate my Mom's Spaghetti Pie! Egg is an essential ingredient.

That looks delish! I'd eat this all the time! sdavissecord @ yahoo . com

I haven't had spaghetti alla carbonara ever since I went vegan and I would love to enjoy it again!

Ummm damn I am salivating at my desk now. I've been meaning to pick up Vegg. I need to do it ASAP. I'd like to make a quiche with it. Yum!

I'd love to try the Vegg, I've heard so much about it! I'd like to try to make a really good Benedict with it!

I would love to try a French Crepe!I am originally from France and I have been missing those since I became vegan... and maybe a clafoutis too!

Oooh your recipe sounds so good! I bet it would be delicious on cold, gray day (like today here in NY!). I would love to try to make vegan Challah bread and then take that Challah bread and make french toast ;) Double Vegg use, ha!

Breakfast bake that a coworker makes

I would love to veganize my mom's cheese strata recipe to feed to my mom and sister. That would definitely turn them to the vegan side!
Thanks.

i've been looking for the vegg everytwhere!!

I'd keep it simple and make omelets. nsl9ez@yahoo.com. Thanks! -Natasha

I would love to try an omelette!

Sounds delish! And being Mexican, there are MANY dishes that contain egg (chilaquiles, huevos rancheros, chorizo con huevos, etc.) and I'd love to find the perfecr egg alternative. :)
adipantera[at]gmail[dot]com

It's hard to pick just one, but french toast would be at the top of the list!

I'd like to use it in recipes that calls for eggs in bread. Especially Challah!

I would LOVE to have this dish for the Vegan "Egg" and potato Casserole...but the way I eat my Vegg is simple!!! I toast my bread and just use the Vegg to dip my eggs...that is what I miss the most, my "dippy" eggs!! LOVE this stuff!!

I haven't had a fried egg sandwich with ketchup since I went vegan almost 6 years ago...I would LOVE to recreate that!!

This looks yummy! Would love to try vegg.

I just tried the Vegg for the first time recently and was so impressed and taken by how much I must have missed that richness of egg yolk! I'm looking forward to trying it in my homemade pasta to get that true egg-pasta flavor.
Best!
Billie
mikeybillie@hotmail.com

Hmm, I'd have to go with a Vegg benedict. I've had ok vegan versions, but never anything quite like I used to remember.

Wow. I've never heard of Vegg and would love to try it. I would make a spinach, mushroom, asparagus quiche. Mmmm.

Thanks for the giveaway, Bianca and Vegg! The only egg-containing food I really miss is angel food cake. :)

I'd like to try to recreate an italian sweet ricotta pie which seems to mean using a sweet tofu ricotta too. That could be interesting ☺️

Hello, I would love to try the potato egg bake that you made, it sounds absolutely delicious.
Ashley_oconnor@my.uri.edu

I'd make a yummy vegan omelet!!

I've been wanting to try the vegg since it came out! I love the sound of perfect French toast or a vegan egg sandwich on a bagel!

I've been waiting to try the vegg for a while now! I'd especially like to try making french toast with it, since that's never been something I've been able to veganize like the kind made the eggs.

I used to love quiche, and the tofu ones aren't quite the same! I would love to make a wiggly, eggy, Veggy vegan quiche with the Vegg!

I'm in Texas & I'd love to make breakfast tacos to see if it would help convert the hubby! A great quiche without tofu would be excellent, too!

(and anyone who makes french toast with it... please invite me over!)

I would love to recreate my Mom's chocolate pound cake.

I'd love to give Vegg a try, no one has it near me that I can find. The first thing I would make is probably a casserole of some sort? So many options!
jewel.ybarra@gmail.com

Did I miss your announcement of the winner on this one?