I mentioned yesterday that I'm working on cleaning out my freezer and pantry for the month of December. And there is nothing more awesome in my freezer right now than Tofutti Pizza Pizzaz!

Tofutti offered me samples of their Classic Original pizza and their new Four Cheese pizza a few weeks back. My freezer was already packed to the gills, but how could I say no to vegan cheese pizza? 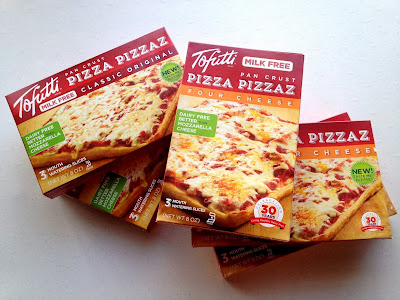 A few things you should know about me:
1) Tofutti was the first vegan cheese I tried when I went vegan in 2004. Some early vegan cheeses, which shall remain nameless, weren't so tasty back then. But Tofutti's American cheese slices never let me down. I can't find them in stores anywhere these days, but if I could, I'd still buy them.

2) Tofutti also makes my favorite vegan ice cream. The other brands are all great. Seriously, never met a vegan ice cream I didn't like. But Tofutti tastes, to me, the most like dairy ice cream. Plus, they make Tofutti Cuties!

3) I live for frozen pizza. Homemade or pizza parlor stuff is great and all, but nothing beats a frozen pizza. Maybe it's the college kid in me (who LIVED on $1 store-brand frozen pizzas), but frozen beats fresh anyday.

Now about this pizza. The Classic Original has been out for some years, I believe. 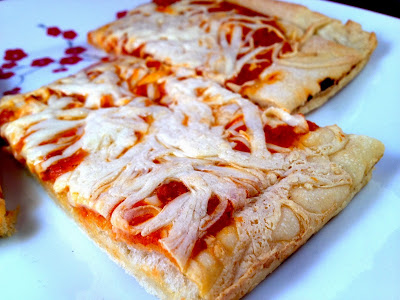 It's just Tofutti's mozzarella melted over a crust of medium thickness. Not too thick. Not too thin. One bite took me back y'all — back to those days of living in a party house and working a bullshit minimum wage job while I somehow aced my way through journalism school. Good times (that description may not sound like good times, but I swear they were a blast!).

But as delicious as the Classic Original was, it didn't come close to the awesomeness of the Four Cheese pizza. 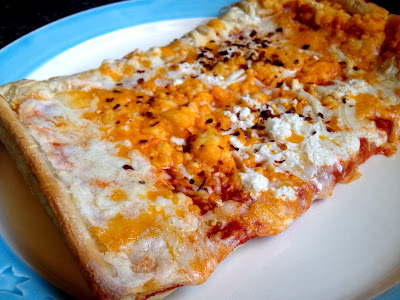 This is made with Tofutti's mozzarella, cheddar, ricotta, and feta. It was so freakin' cheesy! Remember how those cheap frozen pizzas would totally skimp on the cheese? And you used to add extra shredded cheese from a bag? Or was that just me? Anyway, this pizza did not have that problem. It had just the right amount of each creamy, melty vegan cheese.
Posted by Bianca at 10:44 PM

Um, for some reason, I've never had these pizzas. I need to change that! I hope our Whole Foods carries them!!

That 4-cheese one looks awesome. The Tofutti original cheese pizza was my first vegan cheese pizza back in 2009!

Mmm! Where do you buy Tofutti pizzas? I haven't seen them at my Whole Foods. Any ideas? Right now my favorite pizza is the Amy's No Cheese vegetable pizza, but I'd love to try the Tofutti brand.

I was supposed to get some Tofutti pizzas, but they never came. And I can't find them at the store, either. :(

YUM!!.. I can still find the Tofutti American Cheese here... I like that they don't use hydrogenated oils in it anymore.. also, I love the Better Pecan Tofutti Ice Cream.. YUM!

I'm excited to try these! I totally agree about the original pizzas! They always reminded my husband and I of the cafeteria pizzas served in school! :)