So I know it may not seem like it, but I promise that I'm still slowly working on my next cookbook project. I've been a little uninspired as of late, and I'm a bit side-tracked with cleaning out my pantry and preparing for my January cleanse. But I am definitely still working on my vintage vegan cookbook, where I veganize popular foods of the 1900s.

Last night, I made a French Dip Sub for the book project. 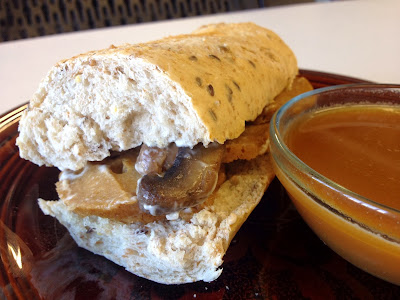 French dip subs were supposedly invented in 1918 by Philippe Mathieu, owner of the "Philippe the Original" sandwich shop in Los Angeles. The sandwich isn't French, but its developer was! According to legend, Philippe was making a sandwich for a policeman and accidentally dropped a French roll into the drippings in a roasting pan. But the policeman loved his sandwich and came back for another the next day.

My vegan version has homemade seitan beef, mushrooms, and vegan mayo. And you dip each bite into a savory vegan beef broth. French dip subs were always my favorite before I gave up meat in '94. And this really took me back.

On the side, I made a dish for my 1900s chapter — New Potatoes in Parsley Butter. 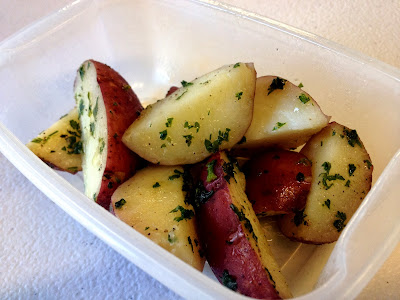 Now this isn't a specific historical dish, but it is similar to something a home cook would have made in those days. Just a simple veggie dish. With (vegan) butter. And the potatoes are boiled of course! Everyone boiled veggies back then.

Speaking of cookbooks, I'll be signing Cookin' Crunk Thursday night at Wish/Langford in Cooper-Young (2157 Central) at 6 p.m. If you're in town, come by and get a few copies as holiday gifts!
Posted by Bianca at 10:05 PM

yum! those both look amazing, and that little history fact was great.

what cleanse are you doing this year? my sister and i are doing the arbonne 28 day detox, and i'm pretty excited. i usually try to follow kris carr's stuff around the first of the year, but i'm switching it up.

Ooooh, yummmmm, that sandwich looks great! I should totally make one of those!

Funny, I was just thinking about parsley potatoes the other day...when I was a kid, it was a frequent side dish at my babysitter's house, but I've never made them myself, for some reason. :)