Last year, my friend Cassi got the bright idea to start a Christmas Cookie Club from some chick-lit book she read. A bunch of ladies get together and swap cookies and tell stories from their year. It's sappy, girly stuff. And while I'm not much of a lady, I do like wine and cookies. When I got the invite last year (she only invites 12 people), I felt kinda special.

But then I read the fine print. Here's this year's invite. 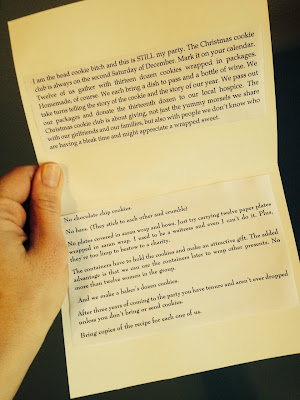 Not sure if you can make out the tiny words, but this says each lady must make 13 DOZEN cookies! That's 156 cookies! That's a dozen for each girl at the party and one dozen for a charity of Cassi's choice. Fortunately, one girl dropped out at the last minute this year, so we only had to make 12 dozen. (Here's Cassi's recap on her blog, The Pretty In Pink Vegan).

Trust me. I did my share of whining and cursing Cassi while I was baking on Saturday. But I made it through. Three hours of baking later, I had 12 dozen Chewy Spiced Molasses Cookies from The Vegan Cookie Connoisseur (see yesterday's post).

At the party, we went around the room and talked about our cookie and how it related to our past year. Since I made a molasses cookie, and molasses is known for its famously slow drizzle, I talked about my very slow-healing (4-6 months, still working on it) stress fracture that's prevented me from running since August, essentially putting my life on hold. Ugh.

Here's Cassi reading Jennifer's 2013 story, which she asked Cassi to read for her. 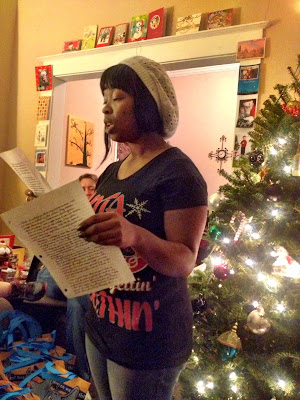 Not everyone made vegan cookies, but many people did. Even some of the non-vegans tried their hand at vegan baking! Here's a round-up of the vegan cookies at the party — Jennifer's Banana Peanut Butter Chocolate Chip Cookie, Karen's Oreo Truffle, my Chewy Spiced Molasses Cookie, Nicole's Chocolate Truffles, Stephanie's Kitchen Sink Cookies, and Cassi's Diva Delights. 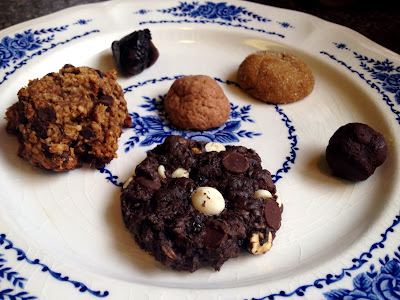 Oh, and Cassi made Vegan Gingerbread Men from Betty Goes Vegan. But she was sad from doing so much baking, so she made them sad little men. 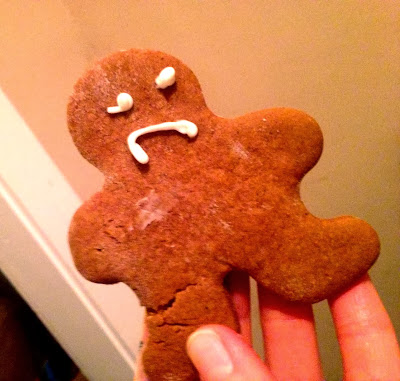 We also had some savory snacks (and plenty of wine!). 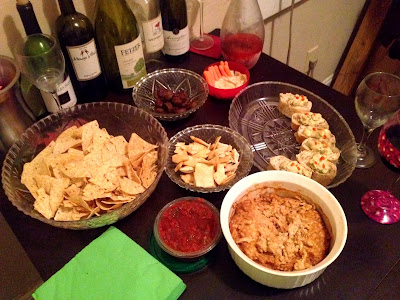 I went home with 12 dozen cookies, one package from each lady. I can't eat that many cookies! But thankfully, I have lots of hungry co-workers who were more than willing to help me today.
Posted by Bianca at 10:09 PM

I loved that crab dip!!! If only it didn't cost so much to ship.

12 dozen? ZOMG. That is a crazy amount of baking to do all at once. Of course, I was just in a cookie exchange, and I ended up baking 90 cookies for that, so...yeah. I think what I'm saying is COOKIES. :)

That is an INSANE amount of baking to do at one time but it really looks like a fun time and a really fun idea!! The invitation is really funny and all of the treats look delicious! I love that you guys donated too.

Haha, I love the idea of a cookie swap but TWELVE DOZEN, I'd probably have wimped out after reading that!