Don't Judge a Dish By Its Color 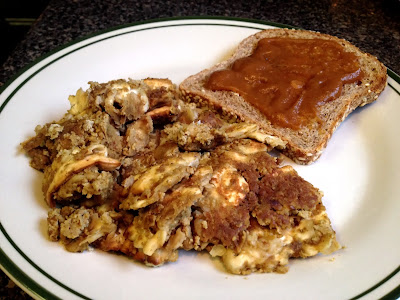 I know, I know. It doesn't look very appetizing. But it was delicious, I swear. This is the Matzoh Brei from Veganize This! by Jenn Shagrin.

Since I'm not Jewish, I didn't grow up eating this traditional Passover dish of scrambled eggs and matzoh crackers. I'd never even heard of matzoh brei until seeing (and trying) the recipe for a vegan tofu version in Vegan Brunch. I liked that one a lot too.

But Jenn's version is way different than Isa's. And that's because Jenn's tofu scramble is unlike any other I've had before. It's made with silken tofu processed with her vegan egg mix (a mixture of finely ground nuts, seeds, and nutritional yeast). That's spread into a skillet and fried and scrambled until solid pieces are formed. If you've ever made a tofu omelet, it's a bit like that. But scrambled.

I've made this scramble (without the matzoh) once before, and I had extra vegan egg mix leftover in my fridge. And I had a box of organic Manischewitz matzoh in the pantry that's been there for months (but had not yet expired!). So this was an official Pantry Clean-out Month meal!

Anyway, it's made by scrambling tofu and then adding rehydrated matzoh at the end. You let the scramble fry a bit longer so the matzoh can brown slightly. It's hard to explain the texture, but imagine a tofu scramble with saltine crackers mixed in. It's really good, but as you're eating it, you're really not sure why.

On the side, I had some Food For Life Sesame Bread with homemade pumpkin butter, a gift from a friend that had been lingering in my pantry since November 2011!  I know because the jar was dated. Oops! Anyway, it was still okay since the jar was sealed. And it just right for this time of year.
Posted by Bianca at 11:16 PM

Jenn made me her matzoh brei once and it was delish! She's a fun, innovative chef with great stories. It was the first time I'd ever had savory matzoh brei, as the one my mom made was always sweet (basically just the mix sprinkled with sugar), just like my mom's mom's noodle kugel is sweet, not savory. It's cool to have different perspectives on traditional dishes.

[ Laughs ] I think that most people are accustomed to seeing brown-coloured food; it's not like it's flouresent-green.

Besides, it's another wonderful vegan recipe!

I'm very intrigued by this vegan egg mix plus silken tofu idea. I'm also trying to do a bit of a pantry clean-out and I have silken tofu, so I may be calling you! haha!