I'm a regular at Whole Foods. And that's how I first met the owner of Jiji's Wraps Cafe. He worked there, and he was always my favorite employee. Super friendly, always helpful. He was that familiar face that makes your grocery store feel like home away from home.

Well, he doesn't work at Whole Foods anymore. Now he and his wife own Jiji's Wraps Cafe, a quaint diner offering pita wraps, sandwiches, and (on Fridays only) Ethiopian veggies. Jiji's is in the same location as a diner that was once called Pita Cafe and had a very similar concept. I used to LOVE Pita Cafe, and I was super sad when it closed. But then this adorable couple came in and brought the wrap concept back. And they added Ethiopian flair! 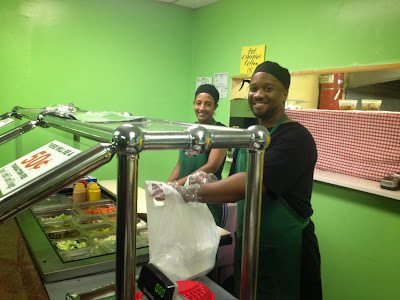 I finally stopped in at Jiji's last night after my first Bikram (hot) yoga class. Vegan menu items are clearly marked, and that made me happy! I had a Groupon for $12 and since the food is super affordable, I had to pick two menu items to use all of the deal. I decided to get dinner and another menu item to save for lunch the next day. For dinner, I chose the Falafel Wrap. 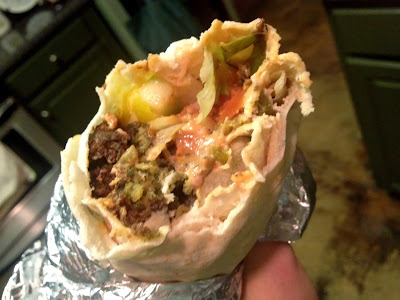 It's hard to get a good photo of a wrap. I had to take a few big bites to get this one. It's a MASSIVE wrap of falafel (5 of them!), lettuce, tomato, cucumber, banana peppers, pickles, jalapenos, Ethiopian lentils, tahini, and hot sauce. You can add fries or chips to make it a combo meal, but honestly, this one wrap alone is enough. I ate the whole thing, but I had to unbutton my pants to make room.

Their falafel is so damn good! I'd venture to say it's even better than the falafel at Pita Cafe. And I always thought Pita Cafe had the best in town.

To go, I ordered the Falafel Salad, but they packaged it with the veggies, falafel, and sauce stored separately so it wouldn't get soggy the next day. I reconstructed the salad today at my office. Isn't it pretty? 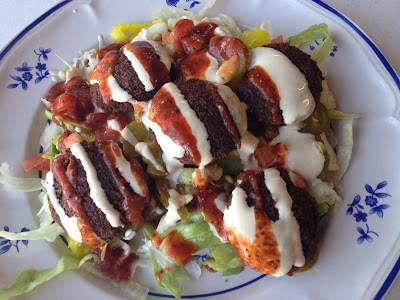 This is the same stuff that comes on the sandwich but in salad form. Jiji's also sells homemade hummus, but they were out of it on Tuesday night.

Now I must get back there on a Friday for the Ethiopian veggies!

I see your floor! :) I need to get by there one Friday. Maybe I'll swing by this Friday since Friday is a no cook day.

Yum! That looks and sounds like an awesome wrap!