Years ago, when I only had a handful of vegan cookbooks on my shelf, I actually made the same dish more than once. These days, I feel like I'm always reviewing new cookbooks or developing my own recipes, and I rarely, if ever, make the same thing twice.

Even if the dish is really awesome and I want to make it again, unless it's something I have to test over and over for my own book, I probably won't get back around to it. But since those old vegan days did allow me the chance to make some dishes over again, I developed a handful of must-make-again dishes from my vegan past, dishes that make me feel all warm and fuzzy and nostalgic when I eat them.

One such dish is the Punk-kin Pasta from La Dolce Vegan by Sarah Kramer. 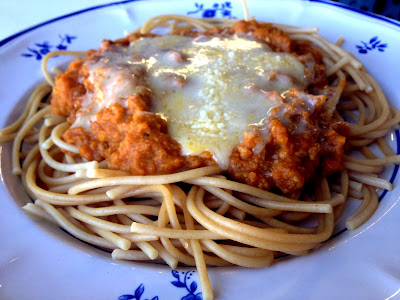 It's a very seasonal dish, so I only make it in the fall or early winter. But I try to make it once a year. It's pasta (I typically use rotini or shells, but I'm cleaning out my pantry and I had so much spaghetti) topped with a sauce of pumpkin, sauteed onions, and veggie sausage or burger. The cheese on top is optional in the recipe, but for me, it's a must.

This was the perfect Pantry Cleanout Month meal because I already had everything to make it — a half-eaten bag of whole wheat spaghetti, a dented can of purreed pumpkin that I got on clearance a month or so ago, onions (because I always have onions in the fridge), and frozen veggie burger crumbles (I have at least three bags of burger crumbles in my freezer). The recipe calls for sliced sausage, but Sarah says burger makes a fine substitute. I've made this both ways over the years, depending on what I have.

I even already had the cheese on top! I've been hoarding bags of vegan cheese lately, and I picked up this Trader Joe's Vegan Mozzarella when Cassi and I were in Atlanta in early November. It was my first time trying the TJ's vegan cheese, and it's pretty damn tasty. Cassi thinks it tastes more like dairy cheese than any other, so it's her favorite. I'm gonna say that Daiya still has my heart, especially since Daiya tends to hold it's shape better when melting. But TJ's cheese is pretty damn tasty. And so melty that it turns it liquid!
Posted by Bianca at 10:50 PM

Yes, I love my Trader Joe's! Its all I want to Christmas bags and bags of cheese lol

Oooh this pasta sounds great!! I'm with you, definitely still a Daiya girl but the TJs cheese is great to have on hand in a pinch.

I'm trying a clean out the pantry & freezer month (or two). Today is a Cookin' Crunk kind of day. Pimiento Cheese (LOVE this recipe!) for a snack with celery sticks and lunch for a couple of days. Half a recipe of Tempeh Gumbo for lunch (& a couple of extra meals) with the rest of the tempeh marinating for 2 dinners of Country Fried Tempeh with Soy Milk Gravy. Thanks for the yumminess!

I definitely find myself making something different all the time, but I want to move back toward more simple, go to meals. That looks yummy.