December is "Pantry Clean-Out" Month around the Crunk House. My goal is to only buy fresh veggies, fruits, tofu, and other perishables to complement the wealth of crap I've been hoarding in my pantry.

Heck, this past weekend, Memphis (and much of the Mid-South) was hit by an ice storm. And as with every icy-snowy weather event in these parts, people lose their damn minds and make a crazy run to the grocery store to stock up on enough food to get them through a week or more of being trapped in their homes. Keep in mind that, when it does snow here, it's rarely more than an inch if we're lucky. But people FREAK OUT. Anyway, when we got word the storm was coming, I didn't even consider stopping at the grocery store to join the hordes because, even if were really iced in for more than a few hours (we weren't), I have enough food to last months anyway.

This weekend, I attempted to use up some of my massive stash of toor dal. I bought a big bag of these Indian pigeon peas for a recipe awhile back, and the remainder have been taking up room on my pantry's bean shelf. I found a recipe for Masoor Dal from my friend Justin P. Moore's awesome self-published cookbook, The Lotus & the Artichoke. 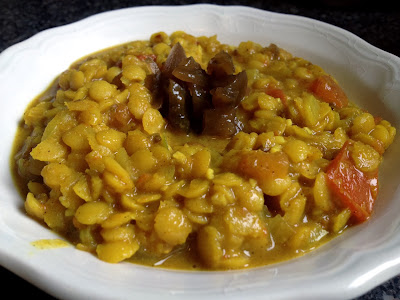 This recipe originally called for red lentils, but I subbed out the toor dal and it worked just great! It also has tomatoes, mustard seeds and lots of other Indian spices, and shallot. For garnish, I added some of my home-canned green tomato chutney that was also taking up residence in my pantry.

I did actually have to purchase the side dish though. I really wanted Papadum, and I'd seen some on the international aisle at Kroger. I love these crispy Indian wafers! But I'd never made them or even seen them in their uncooked form. Straight from the box, these are just flat, uncooked discs. 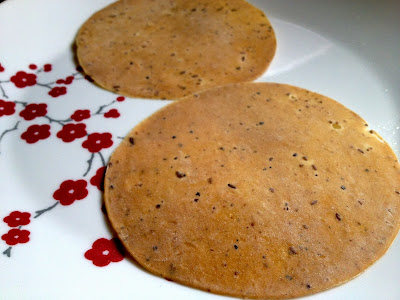 But you fry them in oil and heat in the microwave (I chose the latter to cut back on fat), and they magically crisp up! 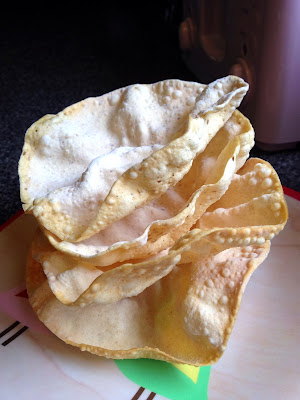 These were crunchy and perfect for scooping up bites of masoor dal. If only I had had some coconut chutney to eat with the papadum, this meal would have been perfect!
Posted by Bianca at 10:26 PM

Yummy! I've never made a dahl or had papadum, but it sounds great.

I love papadum but I never knew they could be microwaved. Game. Changer!

I always toast mine in a dry skillet. I will make them more often though now that I know your trick!

Whoa, that's so cool, I had no idea papadum looked like that pre-cooked! The dahl looks delicious. I really need to do a cupboard clearout too...!