On Sunday, my friend Cassi held a holiday luncheon at her house for a few of her closest friends. It was her way of giving all of her gifts out at once (and an excuse to cook a nice meal and drink wine during the day).

When we walked into Cassi's living room, where she'd set up a long dining table, we were instructed to sit wherever we wanted. But we were warned that Winnie the Pooh-themed place cards would determine where we actually sat. Problem was, none of these place cards had our real names on them. They just had names of Winnie the Pooh characters, and once all the guests arrived, we had to figure out which one we were.

Cassi said she was Christopher Robin, since he didn't have one best friend but lots of great friends. Each of us made up the rest of the gang. After a little deliberation, we determined that I was Pooh Bear! Here's my card. (And where he says that Pooh loves honey, it really means "wine"). 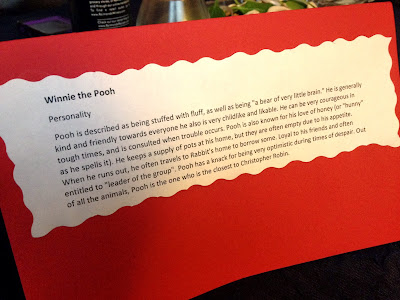 We opened our presents next. Cassi made homemade wine glasses from repurposed wine bottles and we each got a Pooh book. Mine was Pooh's Little Fitness Book. Then it was time to eat. Cassi made the Manicotti with a Kalamata Olive Pesto Tofu from Betty Goes Vegan. Annie Shannon gave Cassi permission to reprint the recipe on her blog. Check it out! 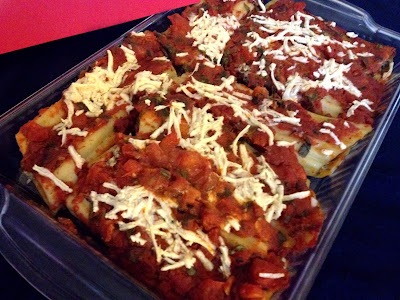 Anyway, this was awesome. I love manicotti! This was stuffed with a yummy olive-y tofu.

And she also made a Salad with Mushrooms and Onions. We had choices of Italian dressing or regionally made (in Arkansas) blueberry balsamic vinaigrette. I went with the blueberry stuff. So good! 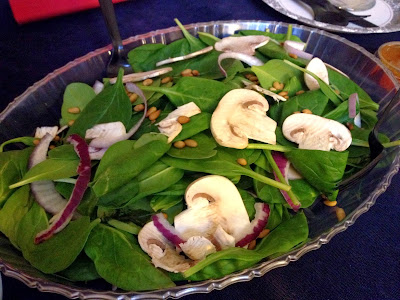 And then it was dessert time. Cassi made her Diva Delight Cookies (recipe here) that she made for Christmas Cookie Club. But she made these into whoopie pies by stuffing with a homemade citrus buttercream. Yum!! 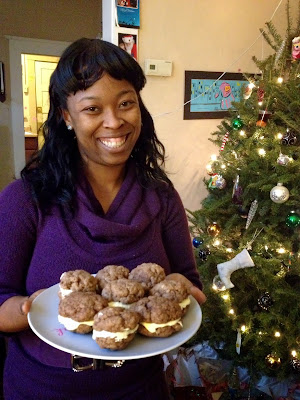 I won't be posting tomorrow night since I'll be doing holiday stuff with my family and Sheridan. But I'll try and post a holiday recap on Xmas night or Thursday at the latest.
Posted by Bianca at 10:19 PM

You and your wine. You are worse than me lol.

Aww, I love it! Just finished reading Cassi's post about this as well - such a cute idea! And that manicotti looks fab! This is my favorite quote from the Pooh card inserting your name - "Bianca has a knack for being very optimistic in times of despair." Yep, that's you!