Another weekend on the Thrive Forward cleanse has come and nearly gone. Here's what I ate.

On Friday morning, I woke up early and fueled my morning run with half of this Vega Whole Food Energy Bar (I didn't eat the whole thing because I only had time for a short 45-minute run): 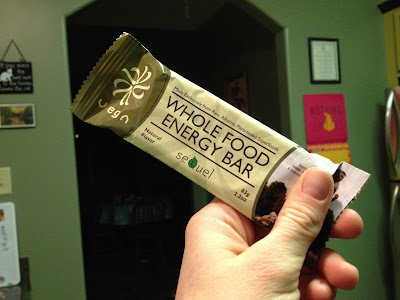 Afterward, I replenished electrolytes with coconut water, followed by a Vega Orange Energy Smoothie. This citrus-y smoothie was made with a whole orange (peeled, of course!), half a banana, a handful of spinach, almond milk, vanilla extract, and a scoop of Natural Vega One: 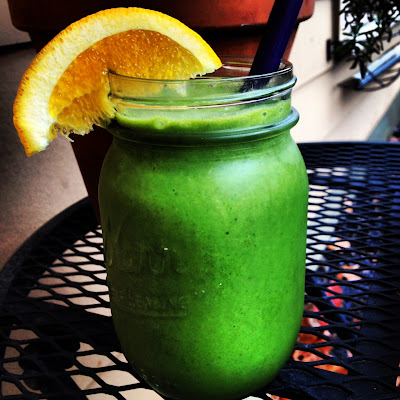 By mid-morning, I was ready for a snack, so I had Carrots and Sweet Pepper Hemp Pesto (shown here). I've been wanting my co-workers Susan and Hannah to try Derae Ethiopian Restaurant for months, so we went there for lunch. Fortunately, the Fuul with Injera Bread was cleanse-safe: 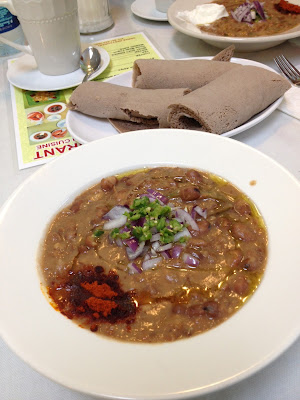 The fuul is a fava bean stew, and though it's typically served with wheat-based rolls at DeRae, the owner is happy to swap out gluten-free injera bread by request. This meal felt so decadent after all the small meals I've been eating. But I did eat way too much injera bread, and my tummy was pretty angry for a few hours after lunch. I guess I've gotten used to smaller portions eaten more often (six times a day) rather than having three heavy meals. I was way too full for an afternoon snack.

But I was hungry in time for dinner. That's when I had another Farmer's Market Salad (shown here) with beets, peppers, carrots, and sprouts. Paul and I rented the movie Savages Friday night, so I snacked on these Red Pepper Strips with Guacamole during the movie: 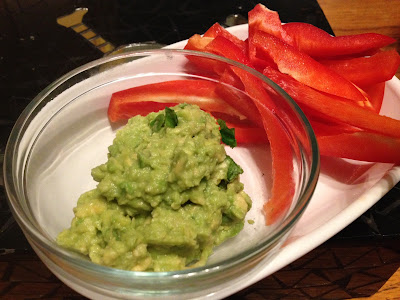 I've committed to running 10K's every Saturday during the cleanse. And as I mentioned last weekend, my regular Direct Fuel Bite snacks weren't enough to power me through a six-mile run. So I made a batch of Brenden's Buckwheat Banana Pancakes from Thrive Foods to see if that would be enough to get me through the run: 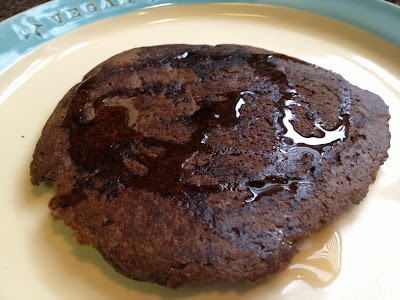 It was!! After one pancake with a couple teaspoons of maple syrup, I didn't feel too full to run, and I stayed fueled throughout the workout. So no need for energy gels. Brenden recommends his eating "performance pancake" recipes before longer or more intense workouts. And yes, I realize this looks like a portabella mushroom. But it's not. It's an uber-healthy pancake made with buckwheat flour, banana puree, and hemp protein.

After my run, I made another Vega Orange Energy Smoothie. That held me over until I went to meet some friends at Balewa's Vegan Gourmet, my neighborhood mostly raw, vegan cafe. There, I had the Mock Chicken Salad with Sprouted Grain Bread (made with raw cashews, celery, and some other stuff). This stuff is AMAZING! Definitely my favorite dish from Balewa's: 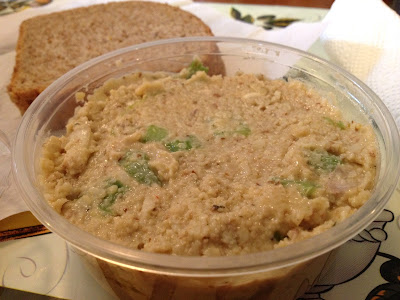 Balewa's usually always has a few raw desserts available too. I couldn't resist this Raw Strawberry Cheesecake. Look at the layers! Almond crust, cashew cream, and a layer of strawberry puree: 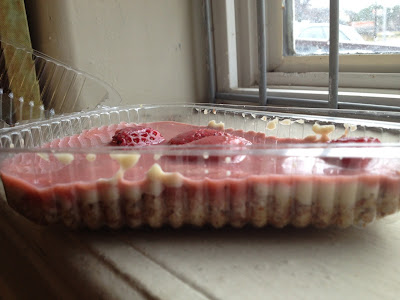 I had the last of my Black Bean Chili Pizza leftovers on Saturday night and more Red Pepper Strips with Guacamole as a late-night snack. I also allowed myself to have two (which turned into three ... oops!) glasses of Our Daily Red vegan, organic wine at my friend Shara's birthday party. I only drank that third glass because we ended up staying there for hours and hours. 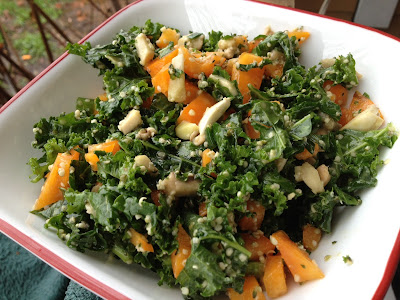 You know I couldn't let a cleanse go without a massaged kale salad, right? This one had hemp seeds, mushrooms, bell peppers, and a miso-hemp oil-apple cider vinegar dressing.

Dinner was the Temple Rice Bowl from Thrive Foods: 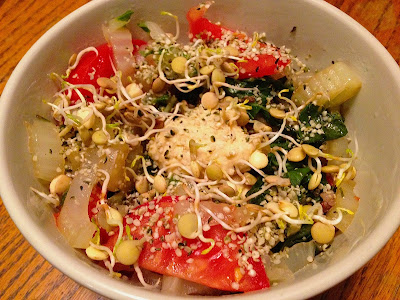 This may not look like much, but it was so good! There's a cup of herbed wild rice blend on the bottom. That's topped with homemade hummus and sauteed bok choy and tomatoes. And then it's sprinkled with sprouts and hemp seeds. I felt like such a hippie eating this, but that's a really great feeling.
Posted by Bianca at 9:51 PM

it's fantastic that you are able to go out to restaurants and find so many options for you on your cleanse! the ethiopian food looks unbelievably amazing. i don't blame you for eating all that injera- it looks so soft and fluffy..

So interesting, so colorful, so healthy!

what a great post! I love seeing all your super healthy foods. I like the Orange Smoothie idea - good idea. I've been doing my same ol' smoothie for a while now. I'll try that one tomorrow. :)

I can't wait to try Balewa's!

And I wish I could do it, but I just can't deal with injeera bread, so I never eat Ethiopian food. Injeera just feels like I'm eating a rotten sponge!