Every January, when I do these whole food cleanses (whether its Thrive Forward, Crazy Sexy Diet, PCRM's 21-Day Kickstart), commenters always ask the one question that I often forget to address: How do I feel?

I'm going to try do better in keeping y'all informed about how the cleanse makes me feel cause that's why I'm doing it, right? To feel better. Well, on day five, I feel great. I've had no weird digestive tummy issues, which I have occasionally on my regular diet, usually after a particularly greasy meal. I don't think I have a wheat sensitivity or anything, but I do think my tummy is happier when I'm feeding it whole, unprocessed, non-greasy food. Right now, I feel light and clean!

My workouts have been great, and I've recovered quickly (a benefit of a clean diet, according to Brenden Brazier's Thrive Fitness). I ran a 10K on Saturday (longer than my usual weekday runs) with no muscle soreness or stiffness later. My arms have been a tad sore from the Thrive Fitness weight training, but that's because upper-body strength has always been my weakness. Working on that.

Now on to the food. I had a Direct Fuel Bite this morning before I did Brenden's VO2 max training on the treadmill my parents so generously donated to the cause this weekend (they were dying to get it out of their garage). I followed that with weight training. Then I chowed down on another bowl of Toasted Apple Cinnamon Cereal (picture in my last post), but I used almond-coconut milk this time.

My mid-morning snack was Gone Nuts Thai Lemon Curry Cashews. This cashew-almond-shaved coconut trail mix is raw, but its heavily seasoned with curry and lemon flavor. So good! I ate half that bag. 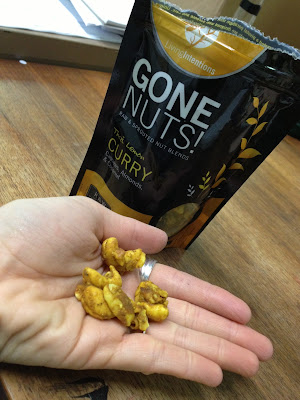 Lunch was another Avocado Cayenne Salad with nutritional yeast, nori, and balsamic vinaigrette from Thrive. I'll spare you the picture since I showed it last Thursday. I'll be eating lots of leftovers on the cleanse to save money, so I won't show them over and over.

My afternoon snack was another Ginger Pear Smoothie, which is pictured here.

Dinner was a new recipe! I made the Black Bean Chili Pizza from Thrive Foods: 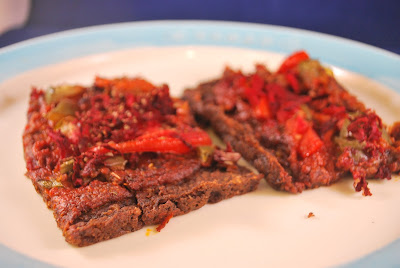 It may not look like pizza, but omg! So good. The crust is made from a paste of black beans, brown rice, coconut oil, chili powder, and chili flakes. Its all combined in the food processor and spread onto a baking sheet. That's topped with a homemade marinara made from sundried tomatoes, olive oil, and herbs. Atop the pizza are grated beets, sliced tomatoes, red onion, green onion, and green bell pepper. Decadent! But the crust is a little soft, so you have to eat with a fork. No biggie.

My after-dinner snack was equally decadent. I found this Vega Maca Chocolate Bar at Whole Foods, while shopping for cleanse stuff: 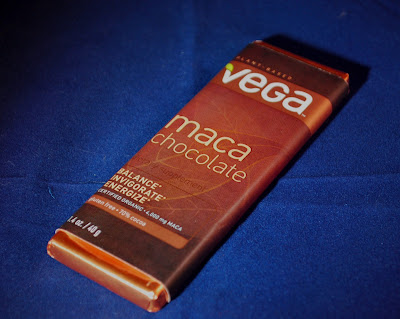 I knew I'd be missing chocolate on the cleanse, so I had to get this. It does contain some evaporated cane juice (and I'm supposed to be avoiding sugar), but it's made by Vega so I figured what the hell? At least it's not white sugar. I only ate a small square of this though and I'm saving the rest for other cleanse days when I need a little taste of chocolate.
Posted by Bianca at 9:35 PM

I love reading your cleanse posts!! In past years, I've been less super into it, but since I'm doing a cleanse this year I'm excited to see what you eat - mine is just sort of self-guided so it's neat to see the meals you make under the Thrive program! All of this looks so good! I'm also feeling pretty good--I was worried about feeling deprived, but so far, so good. Woohoo! Thanks for inspiring me to give this a shot : )

Loving these posts. That "pizza" looks amazing. As does everything you've posted. Healthy eating certainly does not have to be deprivation!

i love these posts ;) the curry cashews look SO GOOD. and i'm in love with the pizzas in thrive. i ate the black-eyed pea one for dinner three weeks straight in the summer.

Do you lose weight on this cleanse?

Hey Elizabeth, I would assume you could if you wanted to. It definitely includes healthy oils, but how much fat you use for the recipes is up to you. I'm not trying to lose though.

The pizza sounds so yum--I never would have thought of it. I'm making a list of things to try out once my own cleanse is up.
BTW, you introduced me to nutritional yeast and I could make out with it, I love it so much.

Reading this made me realize I'm really lenient with this month-long diet, ha ha ha! And I mean, I'm in Austin so I have to try out some of their kick-ass vegan food (like donuts!). But no coffee, booze, smokes, gluten (mostly), and processed foods (mostly), as well as exercising has got me feeling pretty awesome! Glad you're doing well with it!