In case you missed my last post, I should let you know that I've embarked on the 30-day whole foods-based Thrive Forward cleanse to get my health back in line after three months of gluttony. From mid-October (my birthday) through New Year's Eve, I always give up on health goals and eat whatever vegan junk food I want. So each January, I do cleanses like this to get my body alkaline and to get me back on track.

Thrive Forward is vegan triathlete Brenden Brazier's cleanse. The free online program comes with 29 videos, recipes, and all sorts of extra reading material (homework!!). It's not too late to join me! I'm also using Brenden's three Thrive series books for recipes and background, but you can do the cleanse without them.

Anyway, I have a TON of weekend cleanse pictures, so let's get started. On Friday morning (day two), I did Brenden's weight training program (which is included in his book, Thrive Fitness), followed by a bowl of Toasted Apple Cinnamon Cereal with homemade Hemp Milk from Thrive: 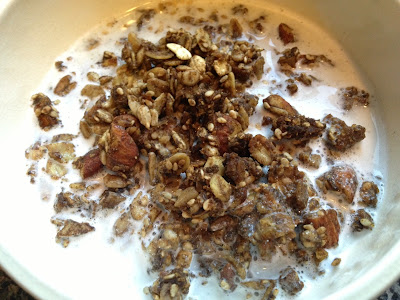 This cereal is made from chopped apple, oats, hemp protein powder, almonds, sesame seeds, sunflower seeds, hemp seeds, and all sorts of good stuff. It's baked at a very low temp, like making granola. The homemade hemp milk was a little too earthy for me, so I think I'll be eating the rest of this cereal with unsweetened Almond Breeze Almond Coconut Milk.

Every day of the cleanse, I'm supposed to drink a smoothie. So on Friday, I had this Mango Hot Pepper Smoothie as my morning snack. Fresh, frozen mango, bananas, jalapeno, agave, hemp protein, and hemp oil. Yum! Loved the spicy kick from the hot pepper: 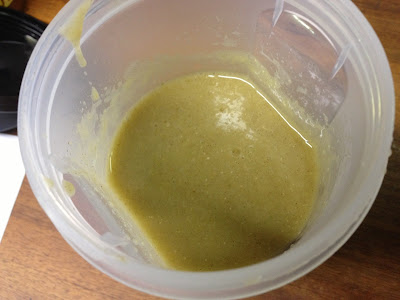 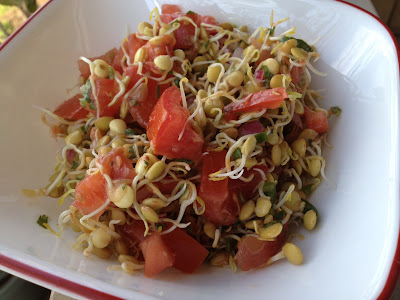 My afternoon snack on Friday was raw Pizza Crackers! I had this in my desk, leftover from a Healthy Surprise box. Good stuff: 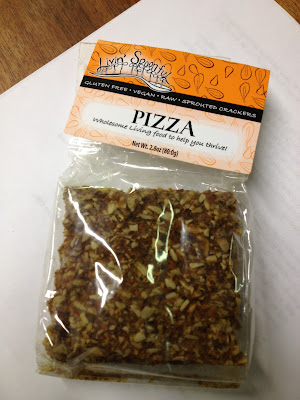 Dinner was a mostly raw Almond Flaxseed Burger with Black-eyed Pea Cayenne Salsa (from Thrive) and a mixed green salad with avocado and lentil sprouts: 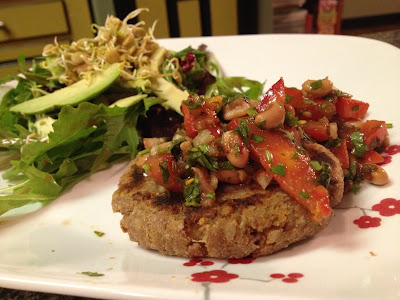 The burger was so good! The recipe is raw (just almonds, flax, garlic, and some spices), but Brenden recommends baking or lightly frying the patties in coconut oil for a warmer treat. Since I'd eaten raw all day, I figured I'd cook this one.

My friends and I went to a 3D screening of Texas Chainsaw Massacre on Friday night, so I snuck in some Baby Carrots with Sweet Pepper Hemp Pesto (from Thrive): 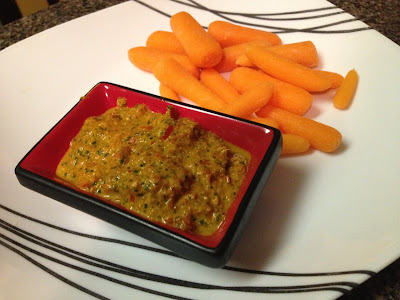 On Saturday morning (day three), I woke up around 9:30 a.m., popped a couple Direct Fuel Bites, and hit the pavement for a 10K-length run. Then I followed my run with a Lemon-Lime Recovery Drink and another Neopolitan Vega Smoothie (see pics in Thursday's post).

By 1 p.m., I was famished! So I walked across the street to Balewa's Vegan Gourmet, the new high-raw cafe across from my house (yes, it's incredibly convenient during this cleanse). Most of Balewa's stuff is raw, but he does serve a few healthy cooked items, such as quinoa and sprouted grain bread. Now, my cleanse is gluten-free, but I am allowing sprouted grain breads since they are supposed to be easier on the digestive system (although they are NOT gluten-free). So, I just HAD to order Balewa's BBQ Mushroom Burger: 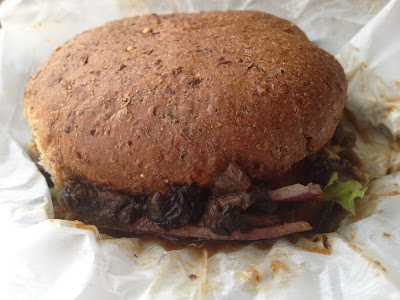 It's marinated mushrooms in some all-natural, homemade 'cue sauce with walnut pesto spread on a sprouted grain bun (the bottom bun is there ... just hidden!). It really hit the spot! Balewa also serves salads and Garden of Eatin' Blue Corn Tortilla Chips with his meals, and although chips really shouldn't be allowed on my cleanse, I ate them anyway. It was only a few chips, and I'm trying not to be crazy and so restrictive that I get all sad: 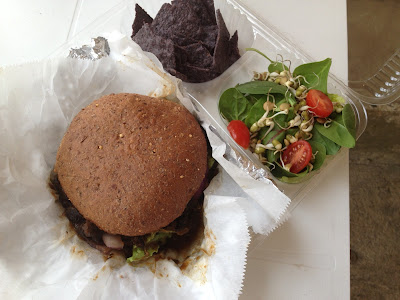 Balewa was giving out free samples of his raw Un-Kookies. Not sure what is in them, but they're delicious! Probably dates and maybe some nuts. Anyway, they taste like cookie dough but healthy. 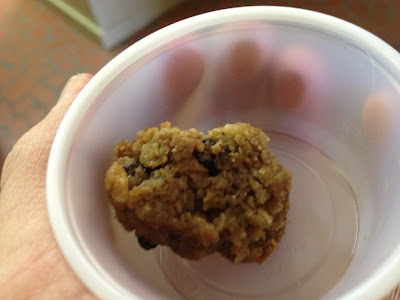 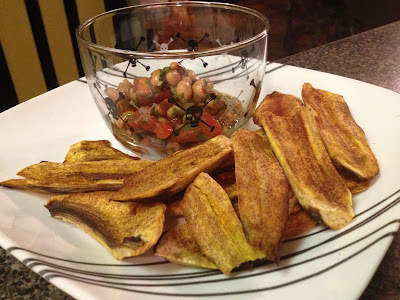 Dinner was another Cheesy Broccoli Bowl with Quinoa (pictured Thursday), and my after-dinner snack was a big ole mixed green salad with pumpkin seeds and sprouts.

Sunday (day four) is rest day, according to Brenden's workout program in Thrive Fitness, so I slept in. Even though my cleanse is sugar-free, coffee-free, and alcohol-free, the one thing I was worried the most about missing were ramen noodles, which I eat in my PJs every weekend morning. I actually found myself dreading the weekend without my ramen. I'd planned on having more of the toasted apple cereal on Sunday morning, but by mid-Saturday, I was getting really sad about the thought of a ramen-less Sunday morning.

So I drove out to Whole Foods and bought some Buckwheat Soba Noodles (Jesus, these were expensive! $9 for a package of 4 servings!). Anyway, I made Brenden's Sesame Miso Soup from Thrive and added the noodles and carrots. Voila! Thrive-friendly ramen!! 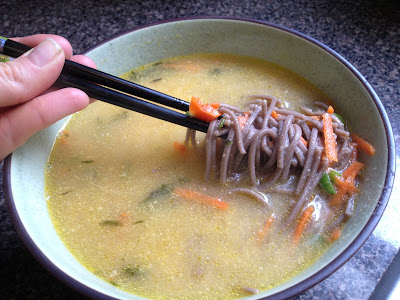 Lunch today was more Spicy Lentil Salad, and then I had a Ginger Pear Smoothie for an afternoon snack (ginger, pear, banana, hemp protein, flaxseed): 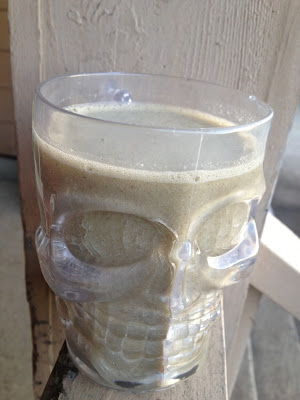 Dinner was another Almond Flaxseed Burger with the rest of my Black-eyed Pea Cayenne Salsa, and my after-dinner snack was Carrots and Sweet Pepper Hemp Pesto.

Whew. That was a long post!! I'll be back with more tomorrow!
Posted by Bianca at 10:40 PM

Great job with the cleanse and running! I don't have any of his books yet, but I signed up online and am enjoying the inspirational videos, articles and recipes! All of your food looks great! I need to get started with the daily smoothies!

wow! I love seeing all the pictures of your meals and snacks. Raw food isn't my favorite, but I love seeing how a mostly-raw diet looks. Also - the jalepeno in raw stuff is a good idea... a little "heat" without cooking it!

wow, everything looks great! it's awesome you are doing a 30 day cleanse using brendan's thrive books. i read thrive and loved it. i've been wanting to try the apple cereal. one of my favorite recipes in there is the sweet potato fries with oregano and pumpkin seeds- SO GOOD.

All of the food looks delicious, especially the cereal and plantain chips. Balewa's sounds awesome and convenient. I love mushroom veggie burgers. And cleanse-friendly ramen is a nice bonus. How are you feeling so far? Can you tell a difference?

You are really inspiring me. I got your book for Christmas and started following your blog. I've been on again off again vegan (vegetarian always since 2005). Anyway, wanted to make 2013 my year to make the switch and stick with it. I love Vega and after reading your blogs went over to Thrive forward. Watched a lot of the videos and picked up his book Thrive Vegan Nutrition. I am jumping in! :)

Wow, good going on the cleanse! I better start mine soon. I've put on an inch. :( Vegan cakes are so good, that's why! I need to cut down on them! I'm just like you, couldn't live without ramen! I get these bean noodles here which is made of green beans, so it's a healthy one. I'm starting my cleanse too!

I'm so inspired!!! WOW!! Thanks for sharing all the great photos too - it helps to get me motivated they look so yummy!!