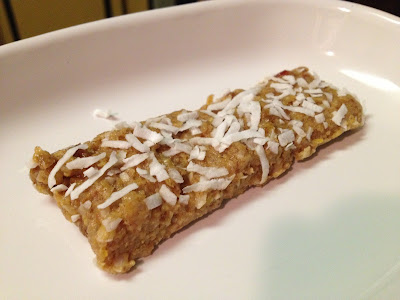 There's a great chart (in Clean Eating 101, lesson 3) with suggestions for how to get the right balance of protein, fruit, seeds, nuts, and carbs. But I decided to try the suggested recipe first, and next time, I'll use the chart and make my own combo. These mango bars (mango, coconut, quinoa, dates, walnuts, and cinnamon) were great, but they were a little flimsy because I had to add a little water to my food processor to get the blade to turn. Next time, I'll just let the processor run longer.

After my energy bar, I did some weight stuff. Then I had another bowl of Toasted Apple Cinnamon Cereal with Almond Milk (only one more bowl left and I can try some new breakfast ideas!). My mid-morning snack was more Cheezy Chipotle Kale Chips from Alive & Radiant. 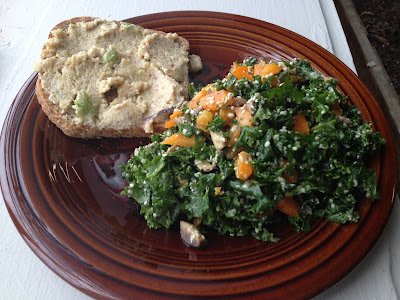 I added the bread and leftover mock chicken salad because the kale salad alone didn't fill me up. But this was almost too much. I mean, I wasn't too full, but I wasn't exactly hungry for my afternoon snack. It's hard to get used to portions on these six meal a day diets. Anyway, I had my afternoon snack around 4 p.m., even though I could have passed. But I needed the fruit in my Mango Banana Green Smoothie. It's mango, banana, flax seed, spinach, and Oriya SuperGreen Medley powder: 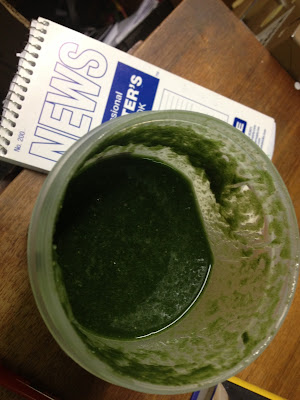 That kept me full until 6-ish, when I had the most delicious Red Lentil Dal from Thrive Foods:

This was so satisfying on this frighteningly cold winter day. It's 28 degrees right now! It hardly ever gets that cold down South. But this Indian-spiced lentil stew hit the spot. I topped it with avocado, tomato, and cilantro. The tomato and cilantro were called for in the recipe, but the avocado was my doing. I had an extra one that would go bad soon if I didn't put it to good use. Turns out avocado and red lentils go together like peanut butter and jelly. Ah shit, I miss peanut butter ...
Posted by Bianca at 10:25 PM

There is something about lentil soup in the middle of winter that hits the spot. We had lentil soup from Crazy Sexy Kitchen last night...sooo good.

And I really want that energy bar, now. Can't wait to see what you do to make your own.