You know, some days it feels like my Thrive Forward cleanse is flying by. And other days, it feels like I've been doing this for months. Today was one of the latter days. I was tempted by vegan cookies at Whole Foods, and I felt like Tofurky cold cuts were literally calling my name, "Bianca, we've missed you! Buy us! Let's be friends again!" Oh, and my Whole Foods now sells Earth Balance Vegan Aged Cheddar Puffs.

So I bought a bunch of junk food, but I have amazing self-control. I'm stashing it for my reward at the end, which officially happens NEXT Wednesday night (only one more week!). Anyway, enough junk food talk for now. Let's talk about the healthy stuff I ate today, all of which was super-delicious.

Before my run, I had a Mango Coconut Energy Bar (yes, I made a ton of these, so I'll eat one every day until they're gone). After my run, I had coconut water and another Apple Cinnamon Vega Smoothie (apple, cinnamon, almond butter, almond-coconut milk, and Vega). 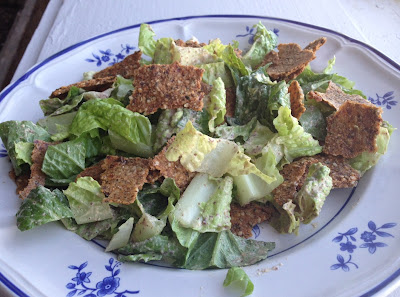 The homemade caesar dressing is made with olive oil, red wine vinegar, Dijon, garlic, and dulse flakes. It actually called for wakame in the dressing and dulse in the salad. But I'm leery of many sea veggies cause I'm not crazy about fishy tasting foods. But dulse is cool. It only has a mild sea flavor. It added that special caesar dressing taste.

Those croutons are the Rustic Sweet Onion Flatbread from Thrive Foods. It's basically a flax and hempseed cracker with chopped red onion, tomato, and raisins. They're made in the dehydrator, and they're probably about the best-tasting flax crackers I've ever made. They're super oniony, like those onion bagels with the little onion bits on top.

My afternoon snack was Health(ier) Popcorn from the Thrive Forward website: 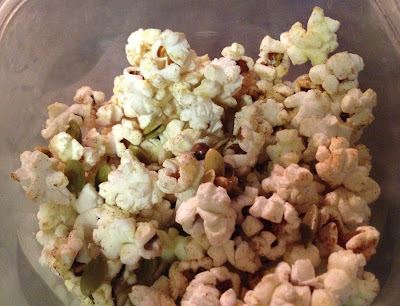 Again, amazing! Popcorn is popped on the stove in coconut oil. Then it's drizzled with hempseed oil, and agave, sprinkled with a pinch of salt and cinnamon, and mixed with walnuts and pumpkin seeds.

Dinner was the Spicy DLT Sandwich from Thrive Foods: 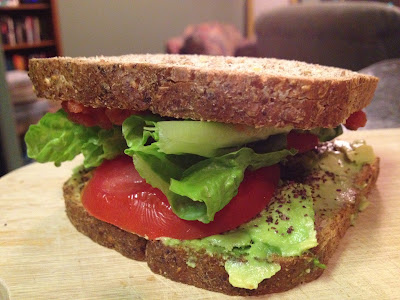 The "D" stands for "dulse," which is sprinkled onto mashed avocado spread on sprouted grain toast. That's topped with salsa, tomato, and lettuce. Even though this was completely cleanse-approved, it felt delightfully naughty, probably because I got to eat bread. Damn, I miss bread.

On the side, I had some Kool Ranch Kale Chips from Rhythm Superfoods: 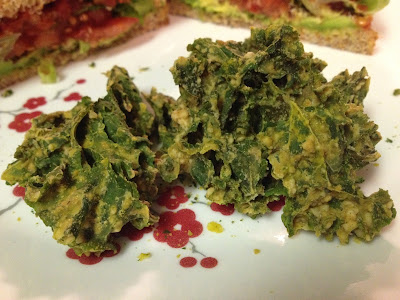 I reviewed their Texas BBQ Kale Chips a couple weeks ago. Those were amazing, but I think these are even better. As far as I know, this is the only vegan ranch-flavored snack. As a former lover of Cool Ranch Doritos, I must say that these are probably the best flavor of kale chips on the planet. Crunchy, ranchy, healthy goodness.
Posted by Bianca at 10:59 PM

Earth Balance Vegan Aged Cheddar Puffs? What the what?!!? Sounds amazing. Just one week to go!! I did my beginning of the year cleanse (inspired by you) for just two weeks--I have been easing back to processed foods, etc. but I actually feel pretty shitty--my stomach bothers me a lot if I overeat or eat certain foods, which it never did during the cleanse. But I also don't think I could stay away from processed foods forever. I'm going to try three weeks next year (or maybe midway through this year?) and then move up to a month! Haha, taking it slow. Love seeing your healthy eats! (And PS loved the feature on Cookin Crunk on Vegansaurus today!!)

I'm really loving your thrive cleanse posts, Bianca ~ it even inspired me to mix up my smoothie routine and sign up for the thrive site. There's some really cool stuff on there! Also, tomorrow I am going to the store to track down some raw cocoa powder so I can try out that un-coffee idea. :) Thanks for so many great ideas!

Wow, gourmet popcorn! I can eat SO much popcorn in one sitting. keep me away from the popcorn... :)

The Aged Cheddar Puffs are the BEST

Girl, you are strong. Stronger than I am! Good for you!

YO man that's some good weed in the last pic. I toke on shiz like that all the time.