Today (April 3rd) was my daddy's 57th birthday! Does this man look damn-near 60 to you? 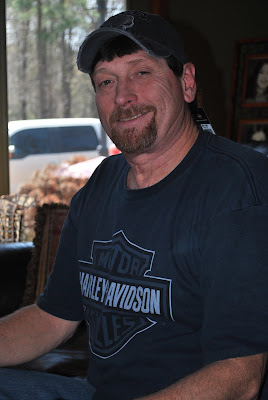 Yep, thought not. He may be old, but my dad's still a total bad-ass. He rides a Harley, hangs out at juke joints, and he wants a skull tattoo. A freakin' skull tattoo?! I couldn't have asked for a cooler dad because there's no one cooler than the one I already have. In the above photo, daddy's showing off his new Harley skull baseball cap, a gift from my mama. I got him an insulated Harley cooler bag.

As per tradition, we lunched on what we like to call "Carb Sandwiches" for daddy's big day. They're actually French Fry Po' Boys, which we first tried in New Orleans at the Verti Marte on Royal Street a few years back. Who can resist steak fries on a hoagie bun, topped with Daiya cheese, vegan dijon-mustard spread, bell pepper, tomato, onion, and ketchup? 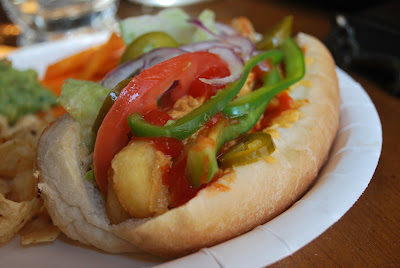 On the side, we had more fried carbs! Yep, we had sweet potato fries with our French fry sandwiches. Oh, and chips with mama's secret recipe guacamole (okay, you twisted my arm — the secret's actually a little squeeze of fresh orange juice along with the traditional lime). If there's one thing we Phillips folks know how to do, it's cram as much naughty foods into one meal as possible. 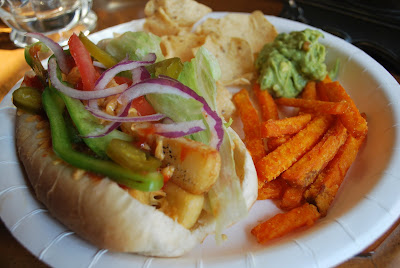 Oh, but we didn't stop there! Daddy requested some sort of coconut cupcake for his birthday cake, and I settled on these Coconut Cupcakes with Coffee Buttercream from Vegan Cupcakes Take Over the World: 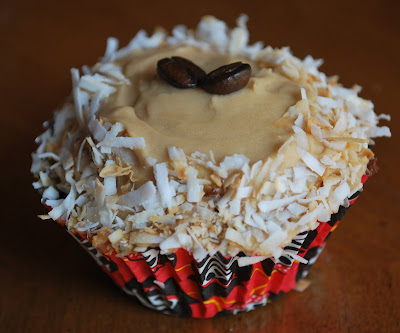 I didn't have any coffee extract for the frosting, so I mixed a tablespoon of instant coffee into a wee bit of soymilk and used that instead. The result was a super-charged, coffee-flavored frosting that perfectly complemented the chocolate-coconut cupcakes.
Posted by Bianca at 10:50 PM

Papa Crunk is looking pretty pleased with that plate :) Happy Birthday to him.
I've got to try that guac version! I hope Mama Crunk doesn't mind.

My gf and I are vegetarians here in Buffalo, NY and I actually had my first Po-Boy this past weekend. We are not Vegan because we love gourmet cheeses too much, especially with wine, but on food we absolutely love the Daiya Cheese, it tastes amazing. The Po-boy I had was eggplant and was decent, but I'm going to try making this carb sandwich and maybe add some mushrooms, it looks amazing!

Wow.. your dad looks great! Happy birthday to him.

that is one yummy looking meal.. and coconut/coffee cupcakes.. my mouth is watering.

Your Dad looks so young its crazy! That french fry po-boy looks like my dream sammie!

Happy Birthday! And nope, doesn't look close to 60 at all!
The food looks delicious! :-)

Happy belated birthday to your father. Your feast looks sinful! :) I'll have to try the french fry po boy.

I would love to eat that on my birthday! What a feast =)

I never thought to make a french fry sandwich, but yours looked so good I have to try it! Your dad sounds awesome, by the way. I don't think my dad knows what a skull tattoo looks like!

That's a great solution for the no-coffee-extract dilemma. I really wish I could just eat that cupcake right off the screen.

It was my Dad's 57th Birthday yesterday too! :)

Wow, sounds like a great bday for your papa!

Wait...did I read correctly? French fry po'boys? No wonder papa has a smile on his face.