Until today, food trucks weren't allowed in the city of Memphis. We're no Portland, after all. But maybe we're one step closer now. The Memphis City Council approved an ordinance today allowing food trucks to serve within 50 feet of a downtown restaurant or 300 feet of a restaurant anywhere else in the city.

Before, only hot dog carts were allowed. And we're not talking veggie dog carts. But today, in an attempt to sway the city council's vote, a local group called Beyond BBQ and the Center City Commission hosted a special food truck festival in Court Square at lunchtime. My fave vegan-friendly eatery, Fuel Cafe, had a truck there along with Crepe Maker, Yolo frozen yogurt, A Square Meal on Wheels, and the Rolling Pit. Nearly 600 people showed up in support!

I waited an hour in this line for Fuel's food truck: 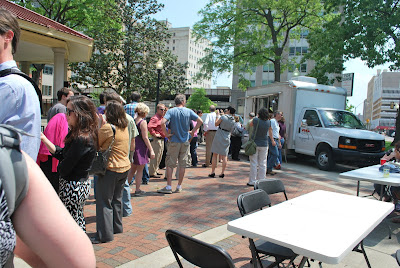 When I finally reached the front of the line, I was faced with a few food choices – a vegan burger or vegan tacos: 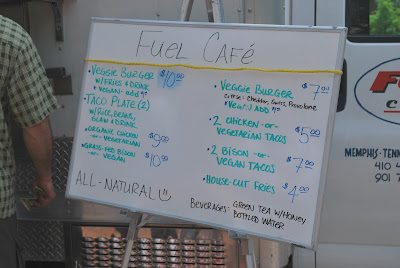 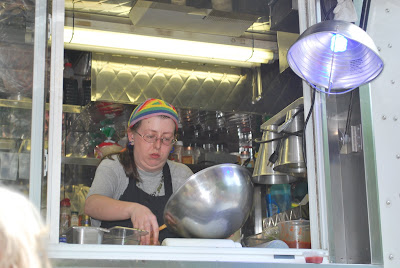 Since I've had Fuel's delicious vegan burger several times, I opted for the tacos, which aren't served in their restaurant: 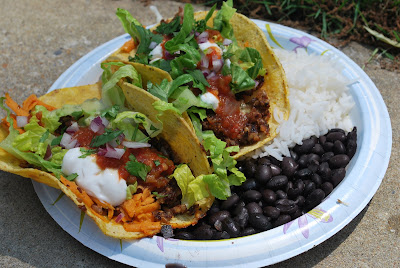 So, so worth the wait! I'd wait an hour for that meal all over again right now. I hope Fuel opens a regular food truck now since it's legal in the city. Yea for food trucks!
Posted by Bianca at 11:22 PM

There's no food trucks where I am either...but that's just because there's not any demand or foot traffic. Oh to move to Portland, or, now maybe Memphis?

i've never seen people wait an hour to get that kind of food in my life...i had to LOL. no food trucks here in pittsburgh, and we don't have the patience to wait anyway...

Those look yummy! We don't have a lot of food trucks here either, not sure what the laws are, but a guy I went to high school with has started his own vegan food truck which is very exciting :) He's just getting started but I imagine he is going to be very successful.

we have food trucks here in rva, although its suuuuuper slim pickins for vegans. and even less for those who are xgfx. but i think things may change some day. that's so awesome on food trucks being legal now in your part, Bianca. w00t! the tacos from Fuel look damn delicious and well worth the wait indeed, my friend!

You're making me drool!

I haven't ever been to a food truck, I don't think... Well, unless you count the State Fair food booths or a pretzel vendor in NYC... Such a cool concept!

That's awesome, and the tacos look delish. I wish Jackson was big enough to have food trucks. I miss the perks of living in a big city!

How cool! The tacos look really good! You're going to have to come up with your own Vegan Crunk food truck now! :D

Lucky me--I AM a food truck! But I have to say, your Mexi-meal doesn't look like it fell off a truck; it looks pretty damn good. Maybe I'll have to change my opinion of the ol' "roach coach" system ;-)

Looks like a much needed food option. Can't believe that 600 people showed up.

I so wish I still lived in Memphis, I would have been downtown for this.

SN: Why did my cousin tell me being a Vegan is to extreme. I so wanted to go off on her, but she hung up before I got the chance.

I waited in line for 40 minutes at Fuel's truck and it was SO worth the wait! I can't wait until the food trucks (theirs in particular) are up and serving.

We have taco trucks in Los Angeles that are definitely worth the wait though there are no vegan options:(