This is my BFF Sheridan: 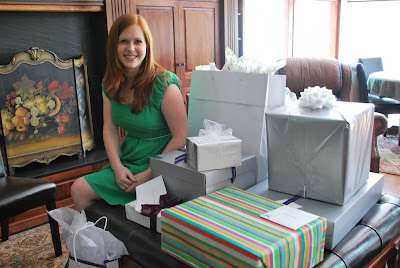 She's been vegetarian for several years, but she and her partner Drew made the vegan plunge this past New Year's. Now those crazy kids are getting hitched, and Sheridan held one of her two wedding showers this past Saturday in Jonesboro, Arkansas. All those prezzies around her turned out to be awesome-ass cookware and dinnerware.

Since I'm a bridesmaid, I co-hosted with friends Liz and Brittany. Neither of them are vegan, so my mom and I split the food duties. My mom's not vegan either, but she is an excellent vegan cook! She made these Tofutti Cream Cheese Pinwheels with black olives, pecans, and green onions all rolled up into tortillas: 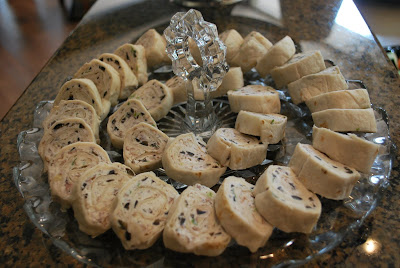 And she whipped up this Ramen Noodle Slaw — a delicious mix of cabbage, crunchy Ramen noodz, sesame oil, almonds, and some other stuff: 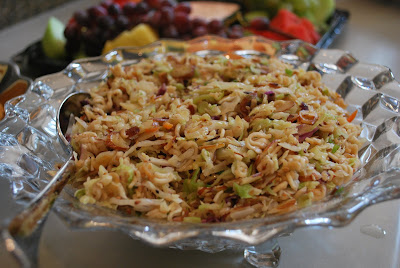 She also made these Mexican Wedding Cookies, sweet balls of toasted coconut and crunchy cookie, rolled in powdered sugar: 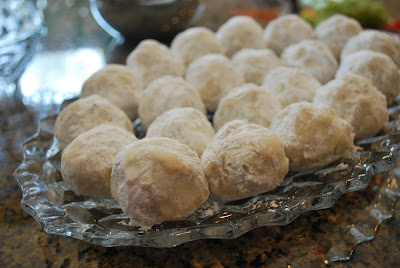 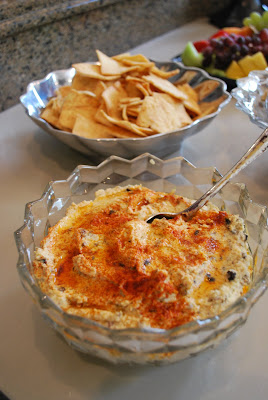 And Muhammara from The Vegan Table. If you've never tried this roasted red pepper and walnut spread, you're missing out. I make it for parties all the time. We ate this with crackers: 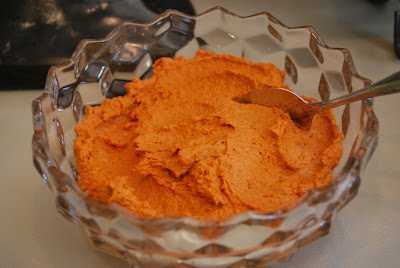 And finally, I brought this Red Velvet Cake from Kittee's Papa Tofu zine. It was my first time trying this recipe, but it turned out great. Moist and it held together quite well. I opted for buttercream over a traditional cream cheeze frosting because it would have taken a lot of expensive-ass Tofutti to cover this layer cake: 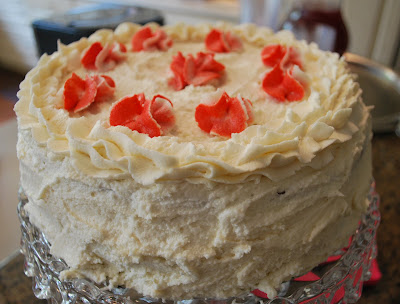 Liz made this super-awesome punch with pink lemonade, Sprite, and sparkling grape juice. It typically has red wine instead of grape juice, but Sher's mom is a teetotaler: 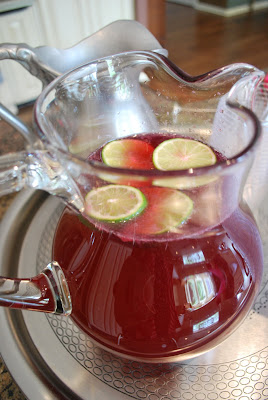 As I mentioned earlier, almost all of Sheridan's gifts were kitchen items — fancy dinnerware, everyday dinnerware, and cooking stuff. I got her a set of four Vegan Dish cereal bowls from Etsy: 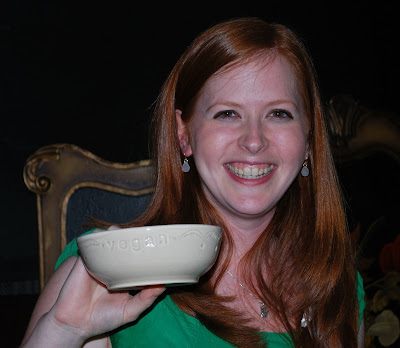 I was tempted to keep the Vegan Dish bowls for myself, but that would have been mean!
Posted by Bianca at 11:38 PM

Hmmm..so I have to get married to get all the good schwag, huh?
I LOVE muhammara but haven't made the recipe from Vegan Table, just other books. That, I could eat by the spoonful. Looks like a fun time!

So cool! I can't wait to see the vegan wedding food! Just the prospect of all that great kitchen stuff makes me want to get married...

I'm already married, but this makes me want to get married again and have you as my bridesmaid! You should cater! Yum!

And all the food looks AMAZING!

I'm a vegan (for almost five years) about to move to Jonesboro. Any pointers?

Hey Amy! Jonesboro doesn't have any totally vegan restaurants, but B.A. Burrito and Blue Coast burrito have options. There's always McAlister's Deli for olive salad sandwiches, and there are a few new Thai places (ask about fish sauce though). There's Fuji for veggie sushi, and Ruby Tuesday for the big ass salad bar.

Kroger is the best to go for health food items, like tofu and soymilk and such. There's a little bulk store called Kuntry Kupboard on Parker Road that sold Follow Your Heart vegan cheese at one time, but it was way overpriced. Haven't checked to see if they still have it. But they may.

Hmmm...email me at phillipsbianca[at]gmail[dot]com, and I'll shoot back more ideas as they come to me. I spent the first 21 years of my life there, and my family is still there so I'm sure I can help!

The Muhammara dip from The Vegan Table is one of my FAVORITE things. Everyone should try it. Vegans and non-vegans alike always like it.

do you have a recipe anywhere for that ramen slaw? i wanna try making it!

so cool to support Etsy shops! The dishes are a cute idea, so when you bring to a potluck it's already labeled, I am usually at the last minute trying to fab something out of toothpicks, tape, and paper to label my dishes as meat-less...

I had such a great time and you were a fabulous hostess! Thanks so much for all of the wonderful food!

I don't know how you had time to open presents, with all that delicious food to eat!