Because I've discovered something better! Leahey Gardens vegan macaroni & cheese is actually better than homemade, swear to god. I've made all sorts of vegan mac and cheeses, both homemade and boxed. But none comes close to this one: 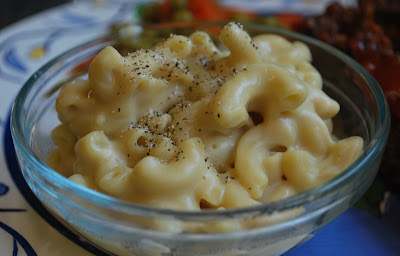 Look at that creaminess! I got a package of Leahey Gardens mac in my Easter basket from my parents (yes, I still get an Easter basket and yes, I got it way early). My dad ordered it from Cosmo's Vegan Shoppe, along with some other goodies that I'll share in a post later this week. I've never had a creamier, closer-to-Kraft vegan mac. I've always preferred the boxed stuff over homemade, but nothing has really ever come close to that Kraft boxed dinner taste. If you're not into that, you might not love Leahey as much as I do. But trust me when I say this stuff brings back childhood memories.

The powdered sauce packet is made of all-natural stuff though — nutritional yeast (of course!), cornstarch, tomato powder, and other spices. All of the ingredients are pronounceable and recognizable, so even though it's boxed, it's still real food.

Truth be told, I probably will make homemade vegan mac & cheese again since Leahey isn't sold in stores here. I have to order it online, and that's costly. Originally, I'd planned to make the Vegan Mac & Cheese from the Farm Cookbook tonight, but when I got the Leahey this weekend, I knew I had to try it. Expect a Farm Cookbook macaroni post soon, though.

The mac & cheese was a side dish with my Hippie Loaf from Happy Herbivore: 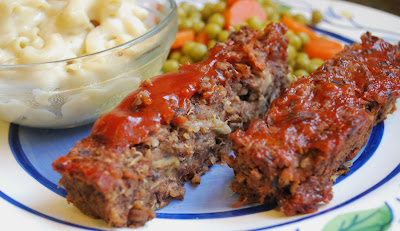 I love vegan meatloaf recipes, and this one was no exception. Mashed black beans, mushrooms, onions, celery, and carrots are held together with brown rice flour, making this main course gluten-free. Of course, the macaroni canceled that out. But anyway, really, really good. And only 190 calories for two slices. I love Happy Herbivore!

Here's a full plate shot with some canned peas & carrots: 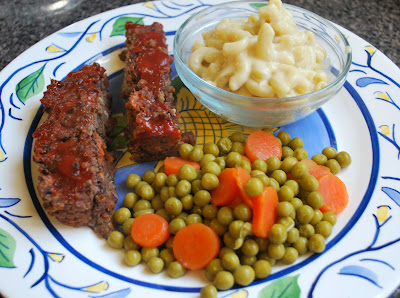 I actually prefer the canned English peas over fresh or frozen. I'm weird like that. I grew up on canned and boxed foods, even though my mom is a phenomenal cook. We always ate a good balance of homemade and prepared foods, so maybe that's why I'm so balanced now. Homemade vegan meatloaf, boxed mac & cheese, and canned veggies. That's what I call balance.

Do you like any prepared foods better than their fresh versions?
Posted by Bianca at 11:12 PM

I hate mashed potatoes, but I LOVE the instant kind from a box. So good.

I love canned peas, too! My grandma used to make me "pea soup" when I was sick- a can of peas, drained, with milk and a pat of butter. It was so ghetto, but I still totally love the taste of canned peas.

Your parents are so groovy to give you a basket! How cute is that!

I cannot believe that you can buy that stuff in a store. I am moving to the States!

I love Leahey's- pretty much changed my life. You can buy a bag of just the cheese mix from Cosmo's, making it both cost effective and allowing you to smother it on everything ever.

It's nice to find another Southern vegan blogger! Makes me feel like I'm not all alone in this "Let's deep fry turkeys!" part of the world.

Your parents are so awesome!

Leahey's is my favorite too. I bought larger bags of the cheese sauce mix directly from Leahey's because it was cheaper than anywhere else. They always throw in a few samples to try too!

That Mac & Cheese looks fantastic. I have tried all sorts of Vegan cheeses over here in Australia and they all taste like puke!!!
I do miss cheese..I wish I could get that product over here...oh well, looks like I will have to go without..LOL. (probably don't need the fat content anyway!!).
My favourite "processed" food is canned beetroot!!

I love canned English peas and canned green beans but hate the fresh/frozen counterparts. I also used to love instant mashed potatoes more than real ones, but I'm not sure about that. I grew up eating a fairly even mixture of fresh and packaged foods, probably because we lived out in the boonies and never ate out, so a box of Kraft Mac & Cheese or canned veggies was like "fast food" to us :)

I really like canned green beans. I hate the fresh/steamed ones because they crunch too much when you eat them, and they just generally taste too "green". I still sometimes use the long, frozen, skinny ones, but I'll cook them for like, 20 minutes so that they soften up quite a bit. :)

Want that mac n cheese! I also grew up on canned vegetables. I think now I like frozen peas better than canned, but there's still a place in my heart for canned green beans.

I've been wanting to make that hippie loaf...I'm so glad to find out that it's good. :) Oh...That mac and cheese does look delish!

Aww, I still get an Easter basket, too! My mom doesn't really know where to find vegan goodies, though. In some cases I prefer canned tomato sauce and hummus to homemade, but I still like to make them about half the time.

What a fantastic-looking meal! I must try this sauce... been searching for an awesome Kraft-like mac & Chreese just doesn't cut it.

Wow, that mac & cheese really does look amazing. I'm looking forward to your post about your Easter basket / Cosmo's Vegan Shoppe post. Cosmo's ship to the UK so I love hearing about the great stuff they have in stock.

I also wanted to let you know that I've awarded you the One Lovely Blog Award because, well, I think your blog's lovely!

Have a nice day!

Even though I love fresh mushrooms I need canned on pizza and when sauteing with onions. I don't think I had a "real" mushroom until I was 20, so I just like the canned taste. Also, I've never had a fresh artichoke, but I like the canned much better than the frozen variety.

hmm, ive yet to find a boxed mac & cheese that i like yet, but i trust your word and im gonna order some of this to give it a try. it looks pretty awesome! and that meatloaf looks amazing, im gonna have to try it out soon as well.

Um, ok, I need Leahy's ASAP. that looks so Kraft-y & creamy & yummy, like back when I was a kid....and too cute the parents still sending an easter basket!

I'm on it! So glad to have a glowing endorsement for a box mix. What a treat :)

the Mac and cheese does look good but that hippie loaf is where my eyes keep going.