I've blogged about Fuel Cafe before, but I just couldn't resist showing you what I had for dinner there tonight. Check out this Vegan Chili Mac covered in quinoa chili, vegan cheese, and Tofutti sour cream: 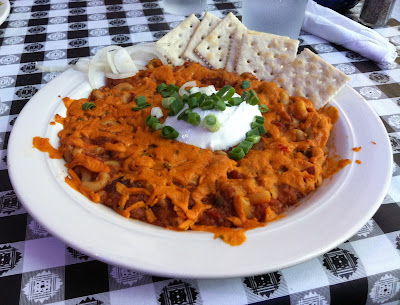 Yes, it was delicious. I ate the entire plate, which was clearly enough pasta for two people. Sometimes I split my restaurant food in half before digging in. Then I only eat half and save the rest for the next day's lunch. But this was too good to split.

Fuel, a cute Midtown cafe located in an old automotive repair shop, has plenty of vegan options (vegan chili mac, vegan chili nachos, sesame-coated tofu wedges with Asian slaw, Thai tofu curry) since Chef Carrie is a vegan. And their meat dishes are all made with humanely-raised animals, which is better than what most places around here serve. I'm not cool with any meat, but for the folks who haven't given it up yet, this is a way better option. Fuel even has vegan ice cream for dessert!!

I met my vegetarian friend Leslie at Fuel tonight. She lives in vegan mecca Asheville, North Carolina, and she's visiting Memphis for the week. Leslie is originally from Memphis, but she's been gone for a few years. Thankfully for me, she's moving back here in mid-May. Leslie was very pleased to find a new place to eat veggie burgers: 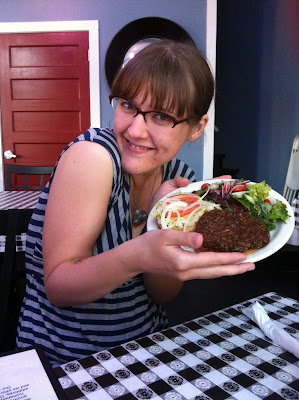 The homemade Fuel veggie burger is the best patty in town, without question. I have a feeling Leslie and I will be making way more trips to Fuel after she moves to Memphis. For more on Fuel, read my Bluff City Vegan Eats post.
Posted by Bianca at 10:56 PM

That looks and sounds delicious. There are some things about Memphis that I miss and Midtown is one of them. I'll have to make my black bean and quinoa chili along with some mac to try my own version.

You did it again! You went out to dinner with Leslie and didn't invite me! I would have brought pie, too.

I still haven't been to Fuel yet! I really need to go.

We are definitely going there next time I visit!!