What we call "Swedish meatballs" down here is actually nothing like the actual Swedish dish, which involves something called lingonberry jam, gravy, and potatoes. The white trash Southern version, often served in Crock Pots at potluck and such, is made with meatballs, bottled chili sauce, and grape jelly. The dish is also commonly referred to as sweet 'n' sour meatballs.

Now I realize chili sauce and grape jelly doesn't sound like something that would work well together. But it really does create a sweet 'n' sour sauce that's somewhat reminiscent of a sweet barbecue sauce. I created these Sweet 'n' Sour Beanballs for my cookbook's appetizer section: 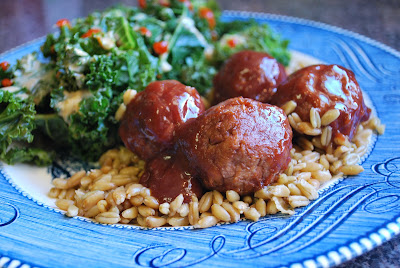 In my recipe, the chili sauce is made from scratch. And I recommend using all-natural grape jelly rather than the high frustose-sweetened crap. I'd tried another version of this recipe several months ago using my recipe for barbecue sauce, but I wasn't happy with it. This version is closer to the original with its chili-spiced sauce and jelly. I served my balls over smoked spelt, but brown rice or pasta would work just as well.

I'd been craving some Steamed Kale with Tahini Sauce and Sriracha for quite a while: 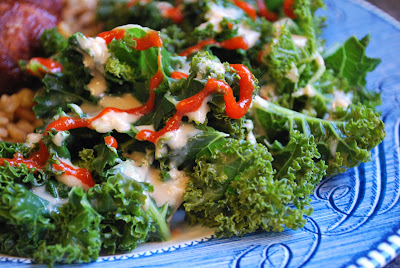 I don't have a standby tahini sauce recipe for kale, but I googled and quickly found this one on Veria.com. Nothing goes better with kale that savory, garlicky tahini sauce and spicy-sweet sriracha. It's hard to imagine how this could possibly be health food. Nine times out of ten, I'd go for kale over ice cream. Seriously.

By the way, the Caribbean Vegan cookbook giveaway ends at 11:59 p.m. tonight. I'll announce the winner in Monday night's post.
Posted by Bianca at 7:24 PM

Ah, the photography on your bloggie gets me every time.
I'm so distracted by the prettiness, I'm not even sure what the post topic is.
(No, just kidding. The "meat"balls look yummy too!)

I'm sure your version is a lot better than the "white trash" version!

Those beanballs look awesome! I'm so excited about your cookbook!

Oh wow! I have a huge bag of kale in the fridge. This looks like such an awesome combination!

I can't wait for your book!

I have heard of the chili sauce/grape jelly thing before.. it sounds sooo odd, but I can totally see how it would be good.

Siracha just adds a little bit extra POW to anything doesn't it? Best condiment in the world ;)

AWH MAN....those Sweet 'n' Sour Beanballs sound awesome! We went to a Christmas party last night where there were sweet and sour meat balls in a crockpot...lol Funny that your post mentioned them. I can just taste your bean balls now! :o)

Hahaha.....my grandma used to make sweet and sour meatballs with bottled chili sauce and grape jelly...I used to love it!!!

ahhh the grape jelly secret for sauces. My family still uses that for cocktail weenies. I haven't tried it with veggie ones. Hrm; fieldroast might work..

Been staring at the sriracha tahini kale all day. I should probably go to the store and get some kale and tahini, but it's so cold. So I'm just gonna squirt sriracha in my mouth and imagine the rest.

I agree, your pictures are beautiful. Oh that kale!

Oooo, those look yummy! I've made Tofu balls before (Vegan version of meatballs), and they're good, but I'd really like to try your Sweet 'n' Sour Beanballs recipe.

I look forward to checking out your cookbook.