I've been reading Leslie's Pixiepine blog for years! And I always knew that if we ever met in real life, we'd be fast friends. We share a mutual admiration for Sarah Kramer, healthy (ish) eating, hula-hooping, eco-friendly living, a certain blue Vegan Peta hoodie, and delicious vegan food. Earlier this week, Leslie Facebook-messaged me to let me know that she and her man Brad would be stopping through Memphis on route to Ohio. She wanted to meet for lunch, and of course I said hell yea! Here's Leslie and Brad: 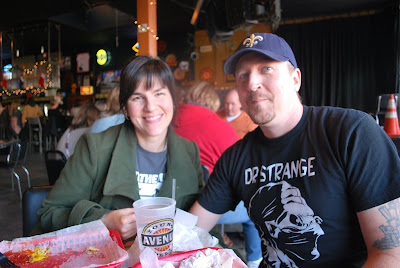 Leslie and Brad own an indie record shop in West Monroe, Louisiana called POPshop & Spazz Records, so they were eager to check out Memphis' Goner Records in the Cooper-Young District. I met them at Goner and we tried to walk across the street to Cafe Ole for lunch, but Cafe Ole was closed. So we went next door to the Young Avenue Deli, a vegan-friendly cafe/rock club with yummy pita sammiches. I ordered the California Pita (with avocado, olives, tomatoes, and cucumbers) with some of the Deli's delicious, greasy fries: 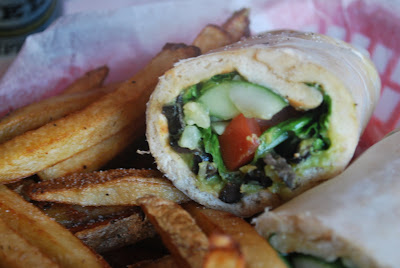 After lunch, Brad went back to Goner to dig through records while Leslie and I chatted up about everything from gardening and breakfast clubs to the elderly and bike lanes. We have a lot in common and I'm sure we'd hang out if we lived in the same town. We even share the same tattoo! Vegan power! 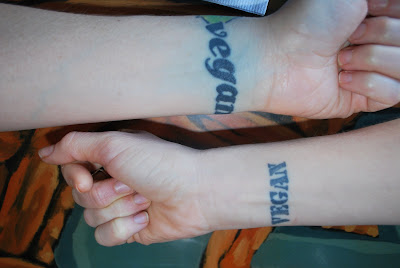 i have a vegan wrist tattoo too! POWER to the veg!

omg the tattoos are too funny.

How cool.. and owning and Indie rcord shop? That's awesome.

I didn't know you were a hula-hooper. Me too! That's awesome!

Awesome meeting...records and vegan food is a top notch afternoon.

Awesome tattoo! How fun to meet a fellow blogger. I hope to meet others some day as well.

Yay- it was so fun. Hope your finger is feeling better, ma'am! Thanks for showing us around :)