I Only Have Nine Fingers

Okay, well I really have all ten digits, but only nine are in use right now. My right index finger is swollen twice its intended size and it won't straighten out. On Friday night, my boyfriend discovered a cat that had apparently been hit by a car lying in our road. It wasn't bleeding, but its back legs were paralyzed. He gently scooped it up and brought it home. While he called the emergency vet, I attempted to calm the cat by petting it.

Bad idea. Obviously, a stray isn't going to be happy about human interaction, especially after being hit by a car. But the cat didn't complain until my nosy dog walked into the room. The cat freaked out and chomped into my hand. It bled, but I didn't think much of it. We surrendered the injured cat to the emergency vet, where they promised to either end the cat's suffering or save it if possible.

The next day, I woke up with a massively swollen index finger. It was bright red and hot to the touch. So I went to the doctor and he confirmed that my finger was infected. It's excruciatingly painful, especially since I'm right-handed. I'm having to learn to use my left for day to day activities until my finger heals. Right now, typing is no easy task.

But I couldn't let a day go by without a post. Here's a few meals I made last week — both testers from my cookbook. There's this Cornbread Pizza topped with TVP, kale, peppers, and squash: 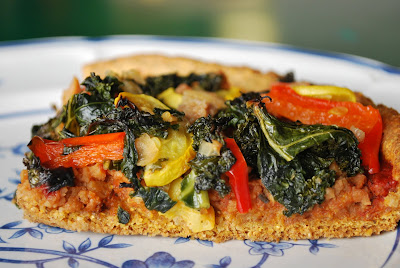 And this Daiya-covered Quinoa-Stuffed Bell Pepper with a simple side of Steamed Sweet Potatoes: 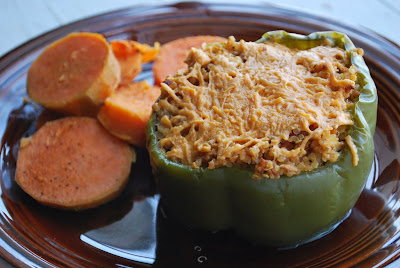 Alright, that's enough typing for tonight. I'm off to soak my hand in epsom salts and then to bed. The moral to this story - don't pet stray, hurt animals. Try to save them, sure. But don't pet them.
Posted by Bianca at 11:11 PM

You and your boyfriend are good souls for helping the injured cat. I'm sure lots of good karma will come back your way! (hope your finger heals quickly!)

cornbread pizza omg! dee-lish looking. sorry to hear about the finger; what a shitty payback for being nice.

In all seriousness, see a doctor. Cat bite injuries are notorious for getting infected, and badly so. Also you might need rabies exposure shots having been bitten by an animal with unknown rabies vaccine status.

Aww, I'm sorry you got hurt while doing something so nice. Poor cat...We had to take our son to the doctor twice from getting bit from a neighborhood cat that chomped right into his arm. Of course, my son was just trying to play with it too enthusiastically - grabbing it by the tail as it tried to run up a tree, etc.

Oh eek! I hope the finger is alright. It was certainly a nice attempt. Poor kitty.

Ouch! I hope it heals up quickly!

om my gosh, that is horrible, both the cat and the finger. were you able to find out if the cat was saved? it breaks my heart to hear stories like that. keep soaking your finger and i bet it will heal up in no time! Merry Holidays you sweet thing!

How awful! Hope both of you are okay. Did you get a tetanus shot--?? Apparently it's de rigeur when you get bitten by an animal. Poor you!

I hope your finger heals soon. Cat bites can be serious.

I hope the kitty you tried to save pulls through.

Your poor finger! Poor you! Doing the right thing hurts sometimes though.
Both dishes from your upcoming book look so good - I can't wait!

I'm sorry you got bit and it's infected.. make sure to keep a close eye on it.. take your temperature and goto the DR if it gets any worse.. ( I am NOT a DR person, but infections can spread really fast in situations like this )

Your pizza looks so good.

Did you take the day off cooking to let your finger recover or did you push through the pain?