My veganism is strictly ethical. The health benefits are great, but I came to this lifestyle purely from an animal rights standpoint. In fact, it was the animal rights movement that gently pushed (okay, more like shoved) me into veganism in the first place. In 2003, I started attending PETA protests in Memphis. There wasn't a local animal rights movement at the time, but PETA made the occasional stop in Memphis for a naked fur demo or a KFC protest. That was at least a year before I gave up eggs and cheese. I was vegetarian then, but not vegan. I went vegan in 2004 because, after a year or so in the AR movement, I knew it was the right thing to do.

I met a nice local vegan couple at a Memphis PETA protest against animal testing. They were interested in starting an AR group in Memphis, and I volunteered to help them organize. We put up flyers around Midtown and held our first meeting with around five people at a Cooper-Young coffeeshop. Soon we were holding our own weekly KFC demos, circus protests, Petco leafletings, and the like.

We called ourselves MAARA (Memphis Area Animal Rights Activists). Our group grew to about 20 people, but over time, many members moved away. Others suffered from activist burnout. Our little AR group morphed into more of a vegetarian social club. We call ourselves Food Awareness now, and my awesome friend Vaughan organizes our monthly vegan lunches and occasional potlucks.

But last week, a representative from PETA sent me a Facebook message asking if I'd be interested in bringing together a crowd for a Ringling Brothers circus protest. The show opened tonight at the FedExForum, and PETA offered to send a box of all-new flyers, comic books, stickers, and posters. I miss protests. I really do. So I said yes. None of my old animal rights buddies were available though, and I was afraid no one would show up.

But thanks to the wonders of social media, our Facebook invite netted 14 people, many of whom I met for the first time! Here's several of us with our signs: 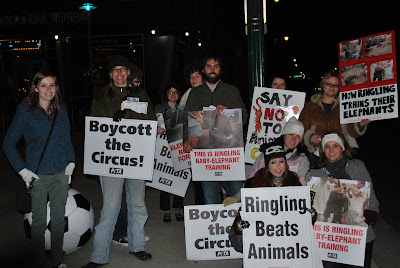 In case you aren't aware, circuses are responsible to some of the most horrific animal abuses. Elephants, who are naturally intelligent, sensitive creatures, are beaten and prodded with sharp metal bull hooks and shocked with electric prods while being trained to do unnatural tricks. When they're not performing, they're chained by the legs in very cramped, filthy storage barns.

PETA sent us DVDs documenting some undercover Ringling abuse footage, and it's heart-wrenching to watch. I couldn't finish the tail end of the video last night because I was crying so hard. However, I feel it's important for animal rights activists to watch this stuff because it gives us the conviction to go on. It'd be so easy to say, "You know, it's really cold outside and I have a lot going on. I think I'll just skip the protest tonight." But when you see how much these majestic elephants suffer at the hands of their heartless trainers, you realize that a few minutes in the cold is nothing compared to what they go through every single day.

Thanks for sharing your sentiments, Bianca. I don't even have the heart to watch that video...

I came to veganism from the other direction - I gave it a try for health, and now I'm sort of exploring the ethical issues from kind of a position of peace. It's given me some space to think about the consequences of eating and using animals.

This video wrecked me. Absolutely wrecked me. It also moved me to send some dough to the Performing Animals Welfare Society (I work for a law firm that represents them, which is how I knew about them).

This is the push I need to get more involved with activism. There is a fur store down the road that I have wanted to protest for a while.

I decided to go vegan for the same reasons that you did. It's nice that there are health benefits, but for me it's all about the animals. It's really great that you did the protest against Ringling. A few months ago we did the Walk for Farm Animals, which was my first time partaking in any sort of activism. It felt really good, I wouldn't mind doing more things like that. I would totally help you guys out if I lived in Memphis.

i love you. i'd totally have taken part if i was close enough. kudos to you and your group for standing up to that shit. i will NEVER take my nephews to the circus, and even when my parents bought them a zoo pass i was like "way to support animal cruelty" - the parents didn't like that either...at least i already have my little nephew Ashton calling McDonald's "Bad Donalds" LOL

Haha at me in that picture. I would have moved to be seen, but I was frozen solid at that point.

I can't stand it. I can't. I feel goddamned powerless.i need to find an AR organisation that i feel solid in donating to, peta is just too politically charged. This video is so devastating. I see the hurt in their eyes and face and shrinking back posture.Those smug, gross-ass men, thinking they're all tough and sexy, like beating animals held captive is some great feat. FATASS? Homeboy was a fucking porker, make no mistake on that one.

Well done. I can't watch videos like this anymore. They literally leave me depressed for days. I live with the memories of the ones I have seen already though. Again, well done for standing up for what you believe in!

I really took that video to heart. I've always been an animal rights advocate. It's amazing what you are doing to save animals' lives and open up people's eyes. I truly admire your heartfelt blog posts. I'm vegetarian myself, because I do not like the taste of meat whatsoever. You've inspired me to reach out and push others to become involved to protect our animals, who are completely powerless and helpless. Thank you.

Ugh! A tiny, semi-evil part of me wants these magnanimous animals to take up arms and crush their abusers! But I guess these guys are just doing their jobs? :-/

This was my problem with Peta. Like you, one of my first experiences with animal rights activism was a Peta protest at a local KFC in an impoverished section hartford, ct. All of the protesters were white and from the rich neighborhood, although we were just from the college up the street. And I had to take a step back because the protesters were basically just harassing all of the people of color that were trying to get a cheap meal for their families. It was kind of messed up! And thus my first experience of disenfranchisement from animal rights. I agree with other comments when I say that there is a void in my life and I'm glad you have a local community to be a part of! Thanks for the post!

Nice post! I decided to go vegan a month ago for the same reason! it may not be interesting but I think it strengthens everybody to know that again one earthling became vegan (I'm from germany). so it's easier to Not give up until everybody (at least more people) understand/s and feel/s the same way we do about animals!

The group is growing. slowly, but there are more and more people who educate themselves and know that it's only fair (!) to stop exploiting other animals. wohoo (;

Bianca- I can't believe that was 7-8 years ago. Brandy and I appreciate being remembered as a nice vegan couple (your article brought back some great memories). It is good to see you are still involved in AR and doing well! We miss the protests also, the good ole days, lol. MAARA was an awesome time for our family.

Are you still participating in animal activism? I'm in Memphis and have been searching for some kind of group, with no hope.