The solstice doesn't actually occur until next Tuesday, December 21st, but I spent Saturday evening at a pre-Winter Solstice celebration. We honored the promise of the return of the light with a big ole potluck and a "dirty Santa" gift exchange.

I took the opportunity to test out three of my cookbook recipes on the mostly non-veg crowd. For my main course, I lugged in a Crock pot full of my Seitan "Beef" Stew: 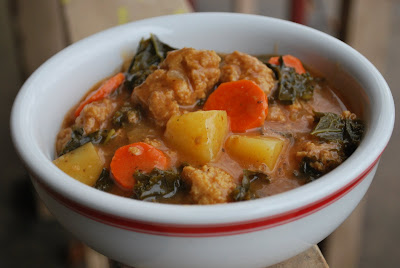 Though it's been years since I've had Dinty Moore Beef Stew, I'd like to think my meat-free version tastes sort of like that. My omni boyfriend — a big Dinty Moore fan — thought it tasted pretty authentic, and I got lots of compliments from the meat eaters at the party. One of the few vegetarians there told me it would be a great stand-in for her mom's beef stew, a recipe that she'd always wanted to re-create.

For a side dish, I brought my Nutty Mushroom Quinoa: 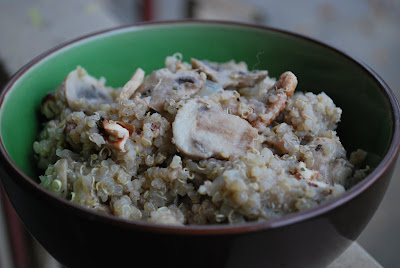 Although some of the potluck attendees had never heard of quinoa, I heard nothing but good things about the dish. Score! I love introducing omnis to new healthy vegan foods. My friend Monica kept calling it "your yummy couscous-like stuff."

And for dessert, I made my Pineapple Custard Pie: 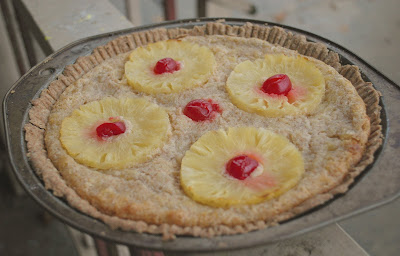 The pie still needs a little work, but I got no complaints. I made it with whole wheat pastry flour, and I think it'd be better with all-purpose. My Granny developed this recipe, and I believe she did so with all-purpose. But I'm always experimenting with trying to sub whole wheat pastry flour. Thankfully, the entire pie was gone at the end of the night. I always hate bringing home like half a pie after a potluck because then I've no choice but to eat it all.

Though I was the only vegan there (and one of a couple of vegetarians), the lovely non-veg Wendi made her roasted sweet potatoes vegan so I could eat them, and she brought vegan cookie bars topped with almonds, coconut, and dried cranberries! It helps that her son is allergic to dairy, so Wendi said she often cooks vegan at home. Here's my plate: 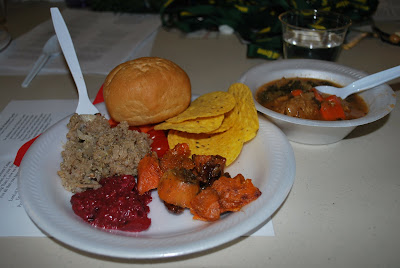 Besides my and Wendi's food, I also found some vegan homemade cranberry sauce, yummy Brim's tortilla chips, and a roll. After dinner, we played "dirty Santa" where everyone opens random gifts or steals someone else's gift. I ended up with green tea fragrance oil, an amber-colored rock bracelet, and a big peace sign ring, and my boyfriend scored an iLuv portable iPhone speaker system.

What's your go-to vegan dish when attending a non-vegan potluck? Do you stick with veggie-based mains or do you get your kicks from introducing omnis to new vegan foods, like seitan and quinoa?
Posted by Bianca at 7:27 PM

Thanksgiving was my first potluck as a vegan, and I stuck with veggies. Though I did bring a vegan cake that everyone enjoyed.
And o'm'gosh I used to love Dinty Moore stew. When O was younger and my father hadn't learned how to cook for kids he used to serve it over egg noodles. Now whenever my omni brother moves into a new apartment I buy him a can of stew and noodles.

I've never been to an official potluck! But my go-to vegan entree is Veganomicon's leek and bean cassoulet. Your comment about Dinty Moore reminded me of a 4-day hiking trip I went on at camp twelve years ago; we ate Dinty Moore beef stew over a fire! Yuck!

Oh, I used to love beef stew as a kid, it never even occurred to me it could be veganized! Yum. I like to bring tzimmes or lasangna to potlucks!

I usually bring something like the black bean-mango-quinoa salad from V'con. Omnis know the flavors and are willing to try it because it only has one new item--quinoa.

Great looking dishes. I use a staple of meat made veggie so that it isn't too far off their normal thing (ease them in) though if I know them, it is a little different.

If it's an omni-fest and I'm the only vegan, I usually just bring wine. If there's vegans or vegetarians, I bring dessert! Vegans win!

My standard is usually a vegan "meat"loaf I love having omnis try things like that. To Thanksgiving this year I also took some mac & chreese (which I know about thanks to you!) and a few of my family members tried it and couldn't believe it tasted good, ha ha.

I go with buffalo seitan wings. I make the seitan from scratch, the washing technique, batter em up, deep fry, coat with homemade buffalo sauce and then broil for a quick minute. People go crazy!

i'm new to your blog - and since i read this entry about the vegan stew it's all i can think about (i'm pregnant & having a wicked craving for it). would you consider posting the recipe, or can you tell me when your cookbook is coming out??? thanks so much!