I think I've made it pretty clear that I'm no fan of winter, but I do love the Winter Solstice. Why? Because it signifies the end of the darkness and the return of the light. It might be the official beginning of winter, but after tonight (the longest night of the year), the days grow longer and longer and the nights grow shorter.

Although Winter Solstice was today, we celebrated last night because I had plans with friends tonight. On Solstice, we give the pets their presents. I know I promised both chocolate and pets in my post last night, but there are so many photos of the pets, I've decided to break my vegan chocolate gift from Stephanie and the pets into two posts.

The cats — Akasha, Pandora, Polaris, Gelfling, Ozzy, and Seymour — got a big stocking filled with jingly balls. Here's Polaris and Ozzy basking in the new assortment, which will all inevitably wind up underneath the dresser, oven, or couch in a few days: 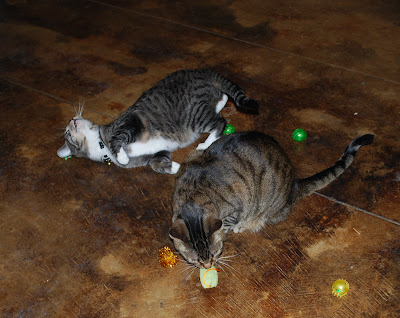 Datsun, my only dog, is super smart. He knows how to unwrap his own gifts. Here he is ripping the wrapping paper from his new Nylabone. Beside the bone is his new orange ball — also a Solstice gift — that he's already torn to pieces: 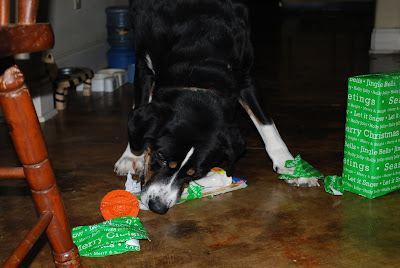 Gelfling tried to eat his new ball made of pressed catnip: 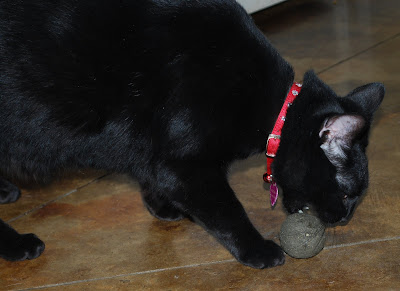 Seymour's favorite gift was the bag of loose catnip, which my boyfriend sprinkled all over the floor: 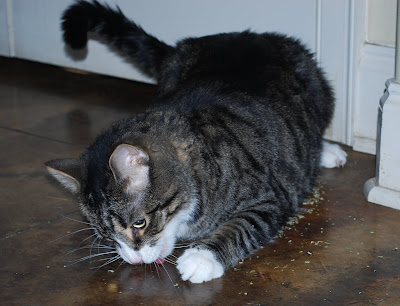 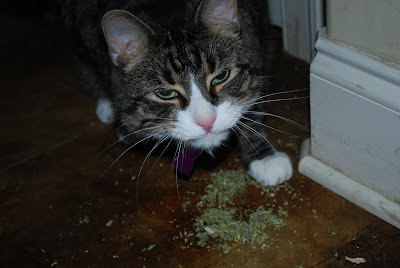 And Polaris enjoyed the 'nip too. In fact, despite all their new balls (and even a remote control mouse), the cats liked the catnip gift the very best. Apparently, my cats are all stoners ... 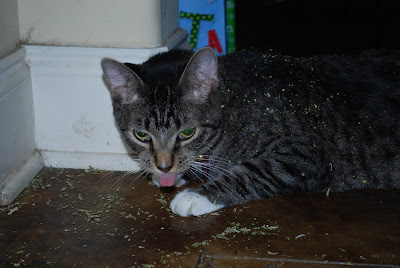 ha ha! Love that 2nd to last pic of Polaris

i LOVED this post - made me very happy! enjoy the season!

Those are some happy cats! I love the last picture, with Polaris's tongue sticking out.

that second to last pic is hilarious...

I love this post. Your cats are very lucky!

What lucky pets. My cats aren't getting anything this year.

I like the catnip photos, too. Mine will fight over the nip ... and then eventually not care.

That last picture is hilarious!

You have lovely cats and the pics are wonderful, but honestly: I think it is a was of catnip.

If you have more, then put it into an old sock and tie a knot a the end. Your cats will love you! Promise.....

Sorry for the misspelling! ;-)