It's freakin' cold here, y'all. Like 34 degrees cold. That might not seem so bad in some parts, but I'm not a fan. I like warm — no, make that sweltering — summer days when the humidity is so high you can barely catch your breath. I like the sunny Saturday mornings at the Memphis Farmers Market when juicy tomatoes and crispy cucumbers are beckoning me from cloth-covered booths.

So despite the subarctic temps (hey, 34 degrees is totally subarctic if you live down South), I braved the cold and rain last Saturday for the special one-time-a-year holiday farmer's market downtown. The holiday market features the same vendors who come to the summer market, which ended in October, but they sell winter produce and crafty holiday gifts. Having not had a farmer's market experience since October (and knowing there won't be another until April), this holiday market was like a shimmering light in the dark, dark tunnel of winter.

I even picked up a few hydroponic tomatoes from MicMac Farms. That was pretty much fate since I needed to test my Raid the Garden Spaghetti one last time for the cookbook's sake: 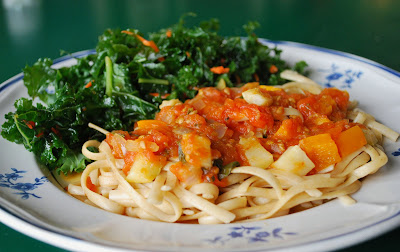 This homemade veggie-heavy sauce is obviously best made in the height of growing season. However, with cookbook deadlines looming, I had little choice but to test this sauce in frigid December. But thanks to those fresh tomatoes, you wouldn't even know this sauce was made out of season. It tasted like summer!

To really throw my seasons out of whack, I served my pasta with a side of raw Rainbow Kale Salad from 30 Minute Vegan. I just cranked up the heat and the gas fireplace, closed my eyes, and imagined myself in mid-July.

How do you overcome the winter blues? Are you into denial (like me) or do you embrace the cold days?

The market does sound like a fun event! I'm totally spoiled and belong to a year-round CSA, so I embrace the cold season by using up the hearty greens, citrus and root veggies.

I live in denial land. I do not like the cold at all! Thankfully it is summer here at the moment, so hot and humid is pretty much the go. Plus sensational summer storms. ;)

I'm in Florida and I've been wearing my winter coat too much this past week or so. Where's my heat?!?!

no denial here...and the highs have been 20 lately. only the ice pisses me off...

I just found out about an indoor farmer's market in Brooklyn, which I can't wait to hit up during the chilly months. However, being a Yankee raised by a German, I love the cold! It wakes me up in the morning and makes me all snuggly at night :-)

I live in NH and it's cold up here! And dark. And I live in a dark apartment halfway in the basement.

It's been challenging this year since I am working from home.. What saves me is my dog and having to get outside to walk her.. and going to the gym and swimming and sitting in the hot tub as a reward when I'm done!

Mmm yummy! I like cozying up in the cold, and I love cold weather outfits, but I think as I get older my Southern-Girl blood is making me love summer way more!!

I'm in Boston, where my window thermometer read a balmy EIGHT degrees this morning. After a chilly bus ride home from work, I'll usually make up a decaf chai tea with a dash of amaretto ;)

I'm with ya on the cold. I hate it! I can't even bring my self to go to the farmers market, cause it's so cold. This southerner needs to move to FL for winter...ha That food sure looks warming though. :o)

HAH! 34 degrees F can't even freeze water! I live in Alberta and here, a cold day is about -33 F.
Although I can see how that would be unpleasant if you weren't used to it!

I'm not a winter liking lady, but for some reason I ride my bicycle all year round in Chicago. It takes lots self motivation to get me out the door each time I have to hop on my trusty winter bike named Quentin. It takes me about 10-15 min. to get dressed, lots of wool layers are needed,SmartWool to be exact. I can't wait for the first 40 degree day here in Chicago.It will be like summer, ha. The pasta dish looks yummy!

I embrace winter days, which are pretty mild, but it is rough on the eating as I feel much healthier in the summer.