Meat Is Murder, So Pass Me the Artichoke 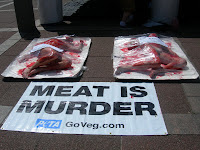 PETA stopped in town today during a 10-city tour to promote World Vegetarian Week (May 19-25). Two PETA interns, doused with fake blood and packaged like meat, lay in the hot Memphis sun to illustrate their "Meat Is Murder" campaign. 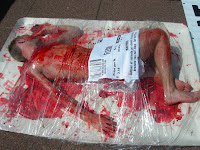 The demo was scheduled during the work day, but lucky for me, my editor sent me over to take some pictures for our newspaper. So I was working, but I still got to see the demonstration.

When I got home, I tried something completely new to me — Steamed Whole Artichoke: 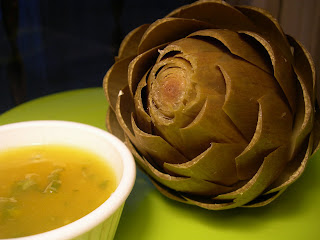 I've had plenty of those marinated baby artichokes, but until tonight, I'd never actually cooked or eaten a whole artichoke. I was inspired by an artichoke article and recipe spread in the latest Vegetarian Times. On the side is Orange-Jalepeno Dipping Sauce, also from that Veg Times article.

The tender steamed artichoke was delicious, but man, it was a lot of work. For those who don't know (because I didn't), you only get a tiny bit of artichoke "meat" on the end of each leaf, which you scrape off with your teeth. Then, buried deep in the center under some spiky tentacle things, is the tasty, tiny heart. I accidentally tried to eat the spiky parts, but quickly realized that was a bad idea. Oops!

On the side, I made the Chickpea-Quinoa Pilaf from the Veganomicon: Spiced with cumin, coriander, and tomato paste, this was one of the best quinoa dishes I've ever had. I think I like the combo of quinoa and chickpeas even more than I like quinoa and black beans. And that's saying a lot ... because I love black beans and quinoa.

How to Steam an Artichoke
--------------------------
1) Rinse the artichoke to remove dirt or nastiness.
2) Cut the tough stem and then trim the pointy tips from each leaf with scissors.
3) Rub a lemon half over the cut leaf ends to prevent browning.
4) Put about two inches of water in a large pot. Toss in one garlic clove and a bay leaf. Squeeze the rest of the lemon into the water.
5) Place artichoke top down in a steamer basket. Place the basket in the pot and cover.
6) Bring to a boil and then lower heat to a simmer. Steam 40-50 minutes or until bottom leaves fall off easily.
Posted by Bianca at 11:44 PM

I like the hard work of eating an artichoke because it makes me eat slowly (otherwise I eat in 10 seconds...). But I like smaller artichokes, I have to admit it. The water from cooking it with lemon juice is good to detox, btw!

I've always been afraid to eat an artichoke. I love the marinated jarred ones because it's a snap, but now that you explained how to do it, I must try! I see them on sale all the time.

As much as I love artichokes, I'm far too intimidated to prepare them myself; but thank you for providing instructions on how to properly prepare a steamed whole artichoke! Sounds great!

Those pictures kind of freaked me out for a minute.

I love artichokes, but have been too scared to make them at home. Thanks for providing directions, I really should try this out sometime soon, and that dipping sauce sounds wonderful.

I love whole artichokes with fresh lemon juice. You can also steam in the microwave for about 7 minutes but I think it tastes better when steamed the old fashioned way.

I'm not a member of PeTa, but they amuse me to no end! :) Hope work slows down for ya soon.

Those bodies in plastic REALLY creep me out... hopefully they make people stop and think. I don't agree with everything PETA does, but you can't argue that they get results!

I saw that Veg Times article too, and cut it out. Now I just have to buy me an artichoke.

I was surprised too, when I found out that you are just to eat the tips.

WOW... that is some powerful message right there. It's sad but seomtimes graphic/gruesome images is what it takes to reach people... its easier to turn the other cheek... pretend that no one is getting hurt by meat eating.... it makes me proud to call myself a vegan!

I never even noticed that recipe in Veganomicon - it looks great!

OMG, those pictures just made me feel sick. I didn't read before I looked at them and they totally caught me off guard - which is a good thing, because they are supposed to be shocking.

I have never, ever, ever cooked artichoke. I should really try, they look so good!

I have to do this...steam an artichoke that is...not wrap myself in plastic and fake blood in public...but hey, that sounds kinda intriguing too...

Damn, that PETA demo is amazing! I need to make that pilaf, I've been putting it off for ages.

I just ate my first whole artichoke the other day... though it was at a restaurant. I made the mistake of eating the hard part too! After chewing for about five minutes, I tried to discretely spit it into my napkin!! Whoops. So do you think it was worth the effort?