So I had a dilemma. My monthly raw food detox day (first Monday of each month) fell on Cinco de Mayo. My first impulse was to move this month's cleansing day to Tuesday so I could celebrate Mexico's independence day with too much chips and salsa, overstuffed burritos, and tangy margaritas. But then I found a recipe for raw tacos, and though I knew I'd regret the day-long ban on margaritas (more on this later), I decided to stick with my original plans.

The day started off with a pretty un-Mexican liquid breakfast — Banana Hemp Milk Smoothie (like the "Turkey of the Year" glass from a local pub? Notice it's animal abuser/scum-of-the-Earth Michael Vick). 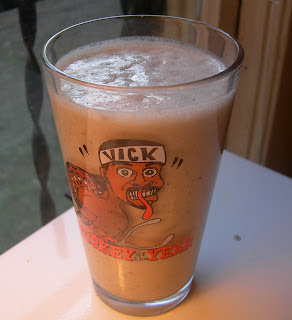 This was really simple and pretty satisfying (at least for a couple hours). Here's the recipe:

Combine everything in a blender and voila.

I also had a glass of grapefruit pineapple juice made in my trusty Jack Lalanne juicer: 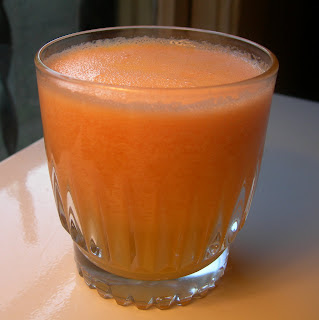 Lunch couldn't come soon enough though. I was hungry again by 11 a.m., so I made a salad using the arugala and green onions I bought at the Farmer's Market on Saturday. 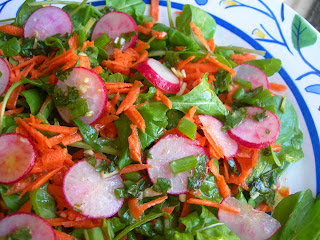 I also added thinly sliced radishes, shredded carrots, and Fatima's Flax Dressing from the "Vegan World Fusion Cuisine" cookbook. The dressing, loaded with flax oil, raw garlic, and apple cider vinegar, complemented the spicy taste of the arugala and radishes. I wasn't even sure I liked radishes when I bought them, but they were so pretty and red! Fortunately, I loved every crunchy bite!

Before heading to the gym at 5 p.m., I snacked on a Cocoa Mole Larabar (in keeping with the Mexican food theme). But dinner really stole the show. The Fiesta Tacos from "Alive in 5: Raw Food in 5 Minutes" by Angela Elliott are probably one of the best raw dishes I've ever cooked, uh I mean, uncooked. 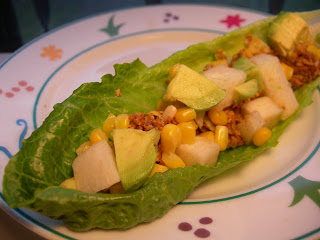 There's a sunflower seed and sundried tomato pate (flavored with traditional Mexican spices like chili powder, cumin, and paprika) stuffed into romaine hearts along with raw corn, cubed jicama, and avocado. Though the book suggested topping the dish with homemade salsa, I forgot to buy tomatoes and such. Fortunately, my friend Greg made fresh salsa today and I was able to steal some for tomorrow's Fiesta Taco leftovers. The pate is too die for (tastes almost like veggie burger in a taco)! Luckily, I'll have some extra pate leftover to spread on crackers and bread later this week.

Finally, after a whole day of doing good with the raw foods detox, I went to a Cinco de Mayo party. As soon as I walked in the door, I was offered a margarita. Seeing as how it's a Mexican holiday, how could I refuse? I figure I did great all day with the raw food thing, so I deserved a refreshing break. And hey, did I mention this was a vegan Cinco de Mayo potluck? Somehow I managed to stay out of the food since none of the dishes were raw ... that was an amazing feat unto itself.
Posted by Bianca at 11:47 PM

You're so dedicated and I'm so jealous. I need some of your iron-fisted integrity to rub off on me. Seriously. And your tacos did look amazing. YUMMMM.

Those look so good! Raw tacos, what a creative way to stick with your Raw Food Monday and still celebrate.

(Oh, and awesome you treated yourself with a margarita. I wish I didn't fall asleep everytime I drank, I would have made margarita or had Corona with Lime yesterday, but alas, a couple of sips and I'm snoring, so no alcohol for this vegan.)

You KNOW I love raw, and I also love smoothies (as you also now know, from my recent blog post, haha) - LOVE, LOVE, LOVE your Banana Hemp Milk Smoothie - yum!!

Wow, you were at a vegan cinco de mayo potluck and didn't eat the food? Now that's willpower. You're raw tacos look very tasty though. And glad you decided to have a margarita, I did the same last night!

Dude. I would have been ALL OVER some vegan Cinco de Mayo food - raw day or not! I admire your restraint.

The Brit and I were in Cordova yesterday and stopped in at the Agricenter Farmer's Market. Jones Orchard was there and we got a quart of strawberries - so good! We were talking about going back to pick our own, but I would much rather have organic! I would love to be on the Windmere Farms mailing list.

I have never been to Pho Hoa Binh! You can't tell through the computer, but I'm super excited.

I would totally LOVE to go pick strawberries with you on Saturday, but I'm pushing it as it is going to lunch. My whole family is going to my parents house for an early Mother's Day thing, so I'll have to pass this time. Thank you so much for the invitation, though!

These all sound (and look) so good! I want to incorporate more raw foods into my diet, but a lot of the recipes seem too involved or time consuming.

margaritas! yes!
I honestly don't understand how you managed not to eat in a vegan potluck... but admire your raw detox!

Hey I'm new to your blog.. but its aweosme! So question.. how many days do you do this detox for? I've heard about raw food detoxes but have never tried them for myself..I think I may adopt your tradition and make raw food mondays part of my mondays!!!