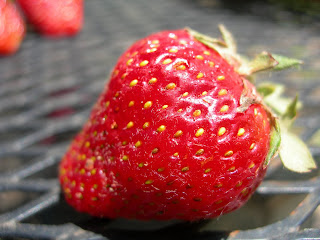 I've been waiting and waiting and waiting for my chance to pick the first juicy organic berries of the season. The folks at Windmere, the awesome Ken and Freida Lansing, send out emails when the berries are ready for pickin.' I received my first email several weeks ago and set up an appointment to pick, but others chose the same day and the ripe berries were gone before I could get there. A few days later Frieda called me for a berry alert. I told her I'd come later that day because I was at work when she called. But other strawberry fans beat me to the fields yet again and I missed out. So Saturday, I drove straight out there bright and early. I picked five quarts for $12! 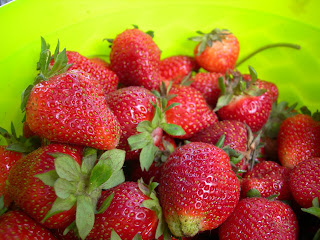 On Mother's Day, I took a quart of berries with me to my mom's house in Jonesboro, and we made a yummy-nummy Vegan Strawberry Pie with Whole Wheat Pie Crust using my Granny's veganized recipe. 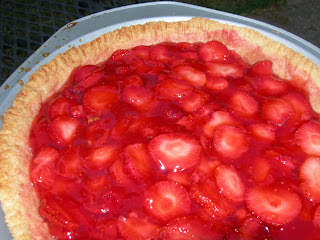 Granny usually uses strawberry Jello in her pie, but she's been experimenting with only using cornstarch as a thickener. Once she perfected the recipe, she passed it on to me to put in my cookbook.

At first, my pie didn't set properly because I didn't cook the cornstarch mixture long enough. We had to dump the strawberry mixture out of the crust, strain out the berries, and continue thickening the cornstarch. Fortunately, the pie was saved! And thank god cause because each bite was just delectable.

Last year, I taught myself to make Strawberry Jam using Sure-Jell, which is vegan since it contains pectin instead of gelatin. I made quite a bit last season, but I gave some away and I ate a lot of strawberry jam on toast over the course of the year. I only had one jar left, so I made six more jars. I gave some to my mom, Me-Maw, and Granny on Mother's Day, and I saved three jars for my own pantry. 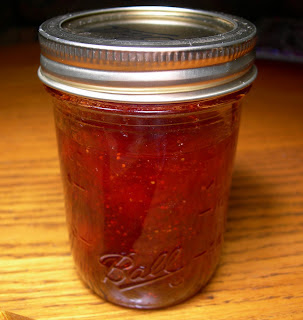 The recipe is printed inside the Sure-Jell package, but it's really simple.

Place lids for Ball or Mason jars in a bowl of boiling hot water, and leave them there until ready to use

Measure out sugar and pour into a bowl. Squish capped strawberries with a potato masher. Place strawberries in a saucepan and mix in Sure-Jell. Bring to a rolling boil (where the bubbles don't stop even while you stir).

Quickly pour in sugar and bring to a rolling boil again. Stir constantly. When a full rolling boil is reached, allow to boil for exactly one minute (and they do mean exactly...this step can determine whether or not the jam sets properly).

Turn off heat and quickly spoon into glass jelly jars. Wipe off lids (that should have been soaking in hot water) and screw on caps. Place jars in a canner (or I use a large soup pot). Cover with water and bring to a boil. Boil for 10 minutes. Remove jars and allow to set for 24 hours.
Posted by Bianca at 10:54 PM

Awesome. I still can't believe you got five quarts! That pie looks divine, and so does the jam. I love strawberry season.

Homemade jam is the only way to go!! Looks delicious!

Wow, amazing! Both the pie and the jam look wonderful!

I too equate spring with farmer's markets, asparagus, and strawberries, actually, haha!! asparagus and strawberries are definitely two of my favorite produce varieties that are available during this time of year :0)

This post was the inspiration I was needing to tell my boyfriend to organize a trip to the strawberry fields when I come back from Spain. I hope he does it! (he has agreed)

The pie was delicious! So glad I got to taste it! That picture of the lone strawberry is great too. I kind of want that, like blown up and hanging on my wall - just a huge strawberry. I got a black and red futon yesterday for my new apt. It's super cute and a giant photo of a strawberry would look awesome hanging above it. Well, at least I think it would.

Hey, sorry to post this on your strawberry page, but I just signed up for a blog - my user name is sheridanna. And I can't figure out how to add your link on the side, like you have a bunch of people on your page. Let me know how!

holy shiitake that is one impressive berry! even more impressive what you did with it. YUM

Strawberries are soooo delicious! I just had the most amazing strawberries tonight, and seeing your post makes me want to have some more. In fact, I think I will...

Pick your own organic strawberries?! Woooo

I wish there were u-pick strawberry fields around here! I would love to make jam. My mum used to every summer after we spent the day picking berries... ah, summer. It's getting cold here, so you're making me jealous!

Oh great, it's that time of year when everyone starts writing about their berry picking adventures! This so reminds me that I want to look for a place to do this near me.
And that pie, oh my!!

Aww... strawberries. I used to ride the "Berry Bus" out to the fields when I was a young teen and we'd pick and pick all day and earn our summer spending money... (cheap child labour - ha!!) It was fun but I never look at "U-pick" places overly fondly any more...

hahaha I completely understand your sentiments about liking animals better than people! Unlike people, animals aren’t fake—they don’t gossip, don’t cheat on you, don’t lie, and don’t even hold grudges!

That's weird about Montgomery Street! I put it in your mind subliminally... haha.

Oh maaaan, I want that Strawberry Jam! The pie sounds yummy & I'm glad it worked out in the end. I want to go berry picking!

Oh lucky! The strawberries here aren't ready yet, that pie looks so good.