I'm sure many of you got the Peta e-mail about Johnny Rockets May veggie burger promotion. But just in case you didn't, I'll fill ya in. For the entire month, Johnny Rockets (a 1950s-style diner), is handing out free veggie Streamliner Burgers with the purchase of another burger, drink, or fries. Click here for the coupon.

Now, I believe we have one Johnny Rockets location in Memphis, but it's way far out in the suburbs. And I'm not even sure if it's still open. But this weekend in Nashville, the Dutchman and I stopped into the Johnny Rockets location inside the Opry Mills Mall. He ordered a meat burger (yuk!) and I got my free Streamliner, which is made with a Boca patty (I assume they use the vegan one since Peta is promoting it).

Wow, this was one tasty Boca. They always taste better when eaten in restaurants for some reason. And it comes with lettuce, onion, tomato, and mustard, so there's no need to ask them to leave off the cheese or mayo. Yea! We also spilt an order of fries and onion rings. The fries were just fries, but the onion rings were amazingly crispy!

Also while in Nashville, we checked out the Farmer's Market. It was huge, but I was a little unimpressed with the selection of local produce. Many items, like bananas and oranges, had obviously been shipped in from way far away. Our downtown Memphis market is much smaller but it only sells local produce, and you get to meet the farmers since you buy from them directly. 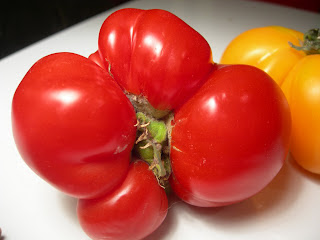 I did find some locally-grown heirloom tomatoes though! I'm sure they're hot house tomatoes since it's too early for real tomatoes. But they were clearly marked "Tennessee product." 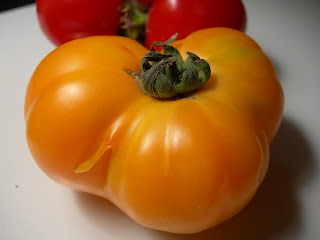 Oh my goodness, look at those big juicy tomatoes.... YUM!!

As I always say, NOTHING beats fresh, local produce - those heirloom tomatoes are positively BEAUTIFUL!

Yay for free veggie burgers and local produce! I think the last Johnny Rockets in Memphis was at the Wolfchase mall, but even that one is gone now.

I love heirloom tomatoes (yum!), but they always look like the elephant man of the produce world to me.

Free food is the best! Thanks for the heads-up.

I want a free veggie burger...

I'm coming to see you! In like, a few hours! Woohoo!

Oh, and I'll start posting regularly once I move...when I have more interesting things to say other than, "So, I sat at my house again today and did nothing..."

At least I hope I'll have more interesting things to say then....
surely...

Ooh I read on her blog that poopiebitch took you to a cake club meeting—I was so jealous, especially since that airbrush thing sounded way cool!

I have been trying to get her to come to every meeting and outing I've been to, but she hasn't made it yet. She swears she'll come to the next meeting, and I plan to hold her to it - even if I have to drag her kicking and screaming (and I am a pacifist)!

I am glad you agree that fruit is a freebee. Also, how stupid is it that my browser recognizes the words 'freebee' and 'tomfoolery' but underlines 'vegan' as if it does not exist?

its always nice to hear kind words... even from people who you've never actually met :)

Thanks for the coupon link! And I must say "Ooo and Ahhh" to the tomatoes!

Wow, look at those tomatoes! I've never seen this kind in Germany. (We also rarely have any yellow ones) Enjoy them!

Thanks for the burger link! The burger tasted great.

The Nashville Farmer's Market is great, but you are right: we could use some more local products. There are some smaller farmer's markets in the area focusing on organic and local products. In fact, I just went to one today, which is held every Wednesday, in East Nashville. If you are back in Nashville, stop by (the Wednesday market is near the Turnip Truck). Hope you enjoyed Nashville, where I live, work, play, and cook.