So last night, I tried to make Susan V's lovely vegan omelet recipe from Fat-Free Vegan Kitchen. But apparently, I need a new non-stick skillet because my omelet turned into tofu scramble: 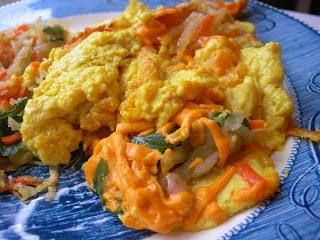 Grrrr....but I gotta say, this was the best damn tofu scramble I've ever put in my mouth. And I've eaten a lot of freakin' tofu scramble. Honestly, I knew better. I knew my crappy non-stick skillet wouldn't cut it. It didn't work for crepes, and I knew it wouldn't work for this. But I wanted it so badly!

Inside the omelet mush is Follow Your Heart vegan cheddar (see how well it melted here!) and hash browns cooked with shredded carrot, onion, and kale. The "eggs" (made from silk tofu) were so light and fluffy, way different than the texture you get with a typical firm tofu scramble.

I tried the recipe again tonight, but I baked the omelet in the oven like Webley did on Fueled By Popcorn. Hers turned out beautifully. Mine, however, was another flop. The tofu stuck to the baking sheet (even though I thoroughly greased it) just like it did in the skillet. I didn't even take a picture because it looked exactly like the first batch.

I'll be making this again though...even without a new skillet, it's the best faux scrambled eggs recipe I've ever tried.

BTW, I'm going to Nashville for the weekend, but I'll be back on Sunday. I'm going to visit my boyfriend (who lives there), and I'm also escaping Memphis' annual World Championship BBQ Fest. People come from all over the world to roast pig flesh this weekend, and I want to be as far away as possible. The stench of smoked death hangs over downtown Memphis for days...yuk!
Posted by Bianca at 11:05 PM

have a safe trip to Nash!

OMG! You are coming to Nashville this weekend? I totally live here! I can give you restaurant suggestions if you want.

That looks like a real omelet!!
Have a safe trip. =]

Have fun in Nashville!

Hey Lauren! Yes please...if you have a ideas for omni places with vegan options, that'd be great...my boyfriend lives there and he eats meat, but we love to find places where we can both eat...I'm gonna try to make him go to the Veggie Cafe though (even though they don't have any meat) because I LOVE that place!

Have a FABULOUS time in Nashville!!

Wow - that scramble looks awesome! I want! I'm going to have to try that out soon. I doubt I would be able to get the whole 'omelet' thing working for me, either. It doesn't matter though, because it looks so good either way!

Oh, you gave me goosebumps too. Now I want to go back!

You should totally register on the PPK! I'm still a newbie but everyone is cool (which I'm sure you know if you've already lurked there... which I did for a time before registering too).

Have a good time in Nashville - be safe!

you have me cravin vegan BBQ!!!

that looks freak'n awesome! and have fun this weekend! :)

Eww smoked death, I feel for you dear! Get out of there, fast! haha have a nice trip.

Oh my God that looks like a REAL egg-- at first I was wondering why you were posting a picture of eggs! Wow, I am definitely copying this recipe down, and I'll try to make it and show it to my parents/friends, because it looks so cool! (Of course, mine will probably not come out looking as good as yours, but at least I'll try!)

Wow, the best tofu scramble you've had? I've got to check out the recipe. Have a fun weekend.

Nice! I've been wanting to try that recipe for ages now. I have a great non-stick pan, but mine will probably come out as a scramble anyways. :) Have a fun trip!

I sometimes get sad when my stuff comes out broken, or not looking right.. but if it still tastes good, thats all that matters!!!
Have gun in Nashville!!!! I would leave too... the smell of roasting pig makes me want to throw up

The same thing happened to me when I tried that omelette, and my pan *did* work for crepes. I think it's a particularly tricky recipe. Though maybe I'm just saying that to avoid admitting that I'm not so good at everything!

Your omelette looks delish even if it didn't turn out. It looks like something you'd get at a restaurant.

that looks so much like an egg omelette - nice job!